Inside Maj. Bill White’s immaculate apartment at The Oaks at Inglewood are reminders of his military service and his travels around the world. [CLIFFORD OTO/THE RECORD] (TNS)
January 25, 2020 Bob Highfill - The Record
Share
Tweet
Flip

Diane Wright opened the door of an apartment at The Oaks at Inglewood, the assisted care facility in Stockton where she is the executive director.

Inside, three people busily went through postal trays crammed with envelopes near a table heaped with handmade gifts, military memorabilia, blankets, quilts, candy and the like. 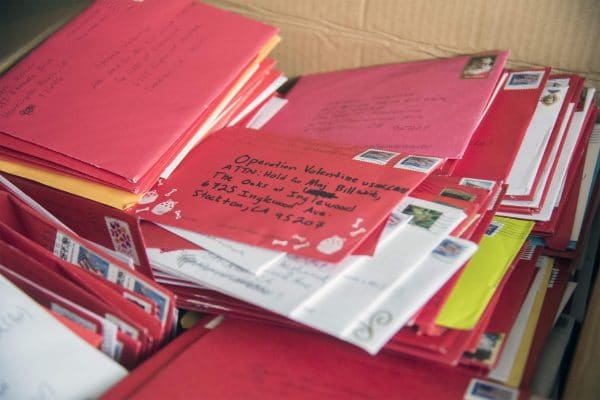 Some of the tens of thousands of cards that 104-year-old retired Marine Maj. Bill White, has received for Valentine’s Day. The goal of Operation Valentine was 10,000 cards; with three weeks remaining to Valentine’s Day, that number could top 100,000 cards, letters and gifts from people all over the world. [CLIFFORD OTO/THE RECORD] (TNS)

Operation Valentine has generated a remarkable outpouring of support from around the world for retired United States Marine, Maj. Bill White. Earlier this month, a resident at The Oaks, Tony Walker, posted a request on social media to send Valentine’s Day cards to the 104-year-old World War II veteran and recipient of the Purple Heart. Walker believed Maj. White would enjoy adding the cards to his collection of memorabilia. The response has been greater than anyone ever thought possible.

“I wasn’t expecting anything like this,” White said. “It hit me like a ton of bricks. I still can’t get over it.

“Up until about a week or two ago, I was leading a quiet life … now all of a sudden all Hell has broken loose.”

The goal of Operation Valentine was 10,000 cards. On Tuesday alone, 28 trays with some 400 to 500 cards in each, about 14,000 total pieces of mail, were delivered by the United States Postal Service to The Oaks, where a vacant apartment near White’s has been turned into a makeshift mail room. In little more than a week, more than 20,000 cards and easily 200 packages have arrived and more are delivered every day. 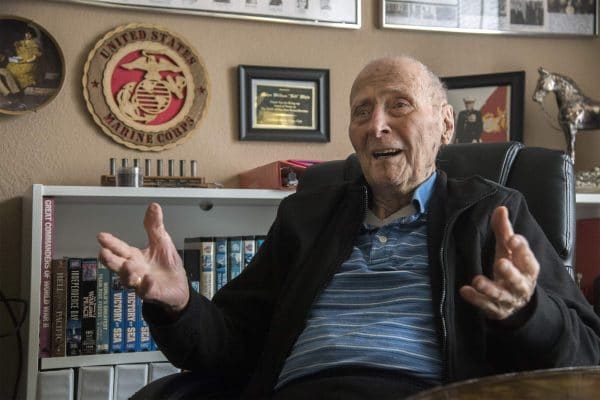 World War II veteran and Purple Heart recipient Maj. Bill White, who at 104 is believed to be the oldest living Marine, has received a remarkable outpouring of cards and support from around the world after asking the public for Valentine’s Day cards. “It hit me like a ton of bricks. I still can’t get over it,” he said. “Up until about a week or two ago, I was leading a quiet life … now all of a sudden all Hell has broken loose.” [CLIFFORD OTO/THE RECORD] (TNS)

Pegasus Senior Living, which manages The Oaks, has joined in by asking each of its 37 communities to send cards to The Oaks or its corporate office in Dallas, Texas.

“A lot of these letters are mentioning I have a father or a brother or a son in the military,” White’s daughter, Mary Huston, said as she went through a tray of mail, along with Walker and White’s granddaughter, Leah Schroeder, who was holding her 8-month-old daughter, one of White’s three great-granddaughters, Eloise. “It’s kind of a way to thank maybe those that have passed already. They can’t thank them personally, so they’re doing it through him.”

People of all ages have responded, including a 16-year-old.

” ‘You probably won’t pick me,’ ” said Huston, recalling what the teenager’s letter said. “So, I pulled that one out because I wanted to answer that one. I wish I could answer all of them, but it’s just not realistic.” 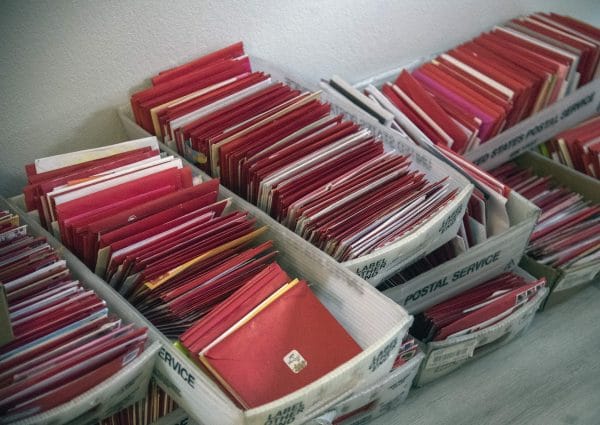 Some of the tens of thousands of cards and letters that 104-year-old retired Marine Maj. Bill White, a World War II veteran, has received for Valentine’s Day. White asked for the cards for his memorabilia collection. [CLIFFORD OTO/THE RECORD] (TNS)

Huston said she and her family will do their best to express their appreciation by mail or social media.

Based on what’s been collected already and with three weeks remaining to Valentine’s Day, Walker estimates some 100,000 cards, letters and gifts from people all over the world, many who don’t know or ever will meet Maj. White, could arrive.

Inside White’s immaculate apartment are reminders of his military service and his travels around the world. White, who is believed to be the oldest living Marine, served on active duty for 30 years and has been retired from the Marines 55 years. He received the Purple Heart for injuries sustained from a grenade blast during the Battle of Iwo Jima. 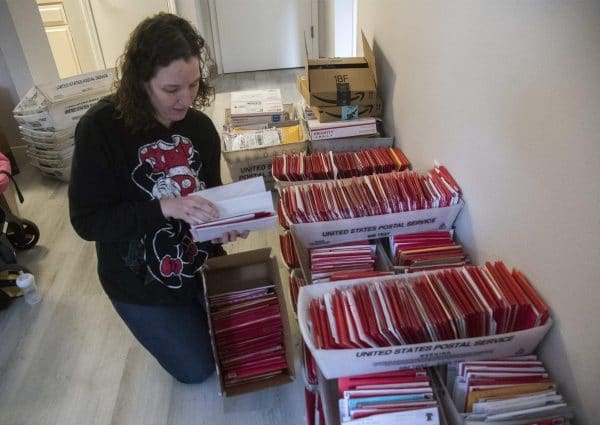 Leah Schroeder sorts through some of the cards that her grandfather, 104-year-old retired Marine Maj. Bill White, has received for Valentine’s Day. [CLIFFORD OTO/THE RECORD] (TNS)

“The force just picked me up and slammed me back against a wall,” White said.

Above his bed draped with a U.S. Marines blanket hangs the iconic photograph of five U.S. Marines and a Navy corpsman raising the second American Flag atop Mount Suribachi on the tiny island of Iwo Jima, an enduring image of World War II.

“There was a 500-foot cliff there that it was on top of,” White said. “At that time I didn’t know they were taking the picture a second time. I was directly underneath 500 feet down when that picture was taken.”

White has led a colorful life, Huston said. When he got out of high school, he wasn’t sure what he wanted to do. He loved trains and decided to travel by rail and find jobs along the way. White enlisted in the Marines but was not accepted. He worked on the Hoover Dam in south Nevada then tried to enlist with the Marines again. This time he was accepted. Huston said her father went through paratrooper school, crossed the equator on the U.S.S. Colorado, became a shell back and fought in World War II and served during the Korean War. 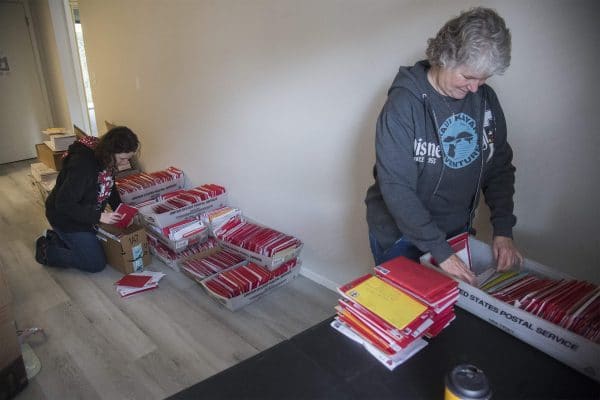 Mary Huston, right, and her daughter Leah Schroeder sort through some of cards that Huston’s father, 104-year-old retired Marine Maj. Bill White, has received for Valentine’s Day. White asked for the cards for his memorabilia collection and, so far, has received tens of thousands of them. [CLIFFORD OTO/THE RECORD] (TNS)

After he retired from the Marine Corps, White worked for the Huntington Beach Police Department as a reserve officer then as a full-fledged officer and eventually became a jailer. White volunteered 30 years with the Boys Scouts Explorer Post 563 that became Huntington Beach Search and Rescue.

White moved to Stockton for health reasons 15 years ago and has been a resident at The Oaks for about four years, he said.

“This shows how much love and appreciation people have for our military and for our country and it’s heartwarming to see that,” Huston said.