After tens of thousands of nautical miles traveled around the globe over the last 294 days, the sailors aboard the carrier Abraham Lincoln arrived in their new home port of San Diego Monday.

The arrival marked the end of a grueling 10-month deployment for the Lincoln, which left Norfolk, Va., on a planned deployment and home-port swap on April 1. Originally scheduled to arrive in San Diego in October, many Lincoln families moved to the area without their sailors over the summer, only to have the ship’s deployment extended in October through the holidays and into January.

Thousands of family members and loved ones lined the pier at Naval Air Station North Island to await the carrier’s return, with some arriving more than four hours ahead of schedule to snag front-row seats.

Katie Johnson, whose husband, Brian, is an aviation boatswain’s mate on the Lincoln, said she had trouble sleeping Sunday night in anticipation of the ship’s return. Johnson gave birth to the couple’s first child, Cameron, on July 4.

“It’s such a great day; it’s been a long time coming and we’re so excited to finally be a family … well, to be whole again,” Johnson said as she waited with other new moms for the ship to pull in. 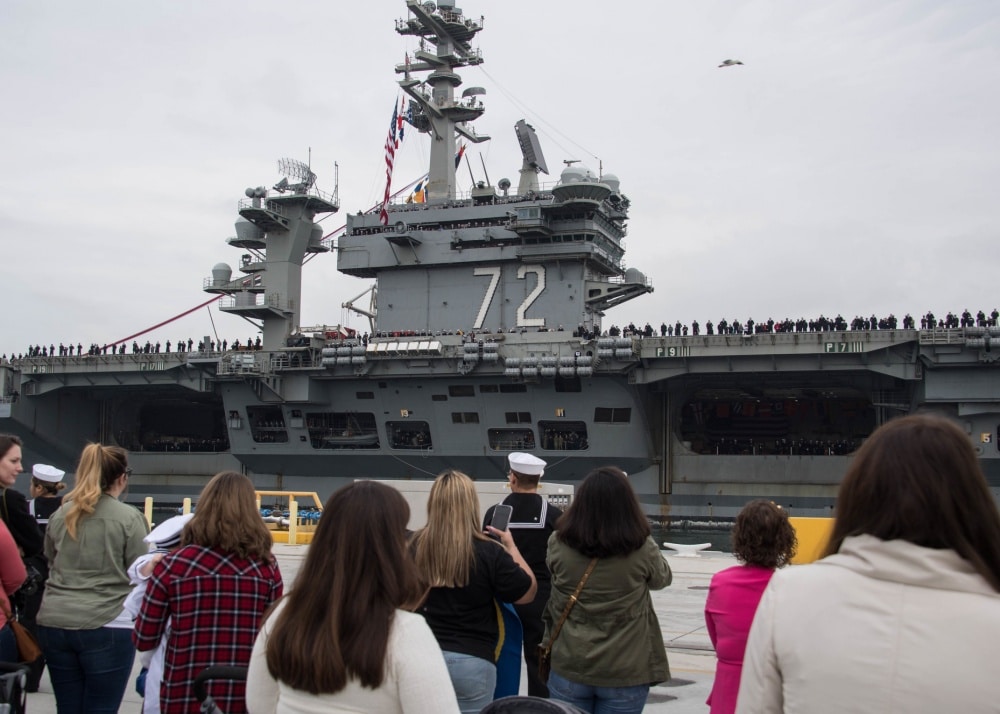 Johnson, who moved to San Diego from Virginia in October, said it was challenging to move without her spouse, but that a support system, including friends and family, was key.

One of those friends, Brittney Lehman, was also pier-side Monday and also with a new baby, 5-month-old Colton.

Lehman said she found out about the delay in the ship’s return the day after arriving in San Diego from Virginia. 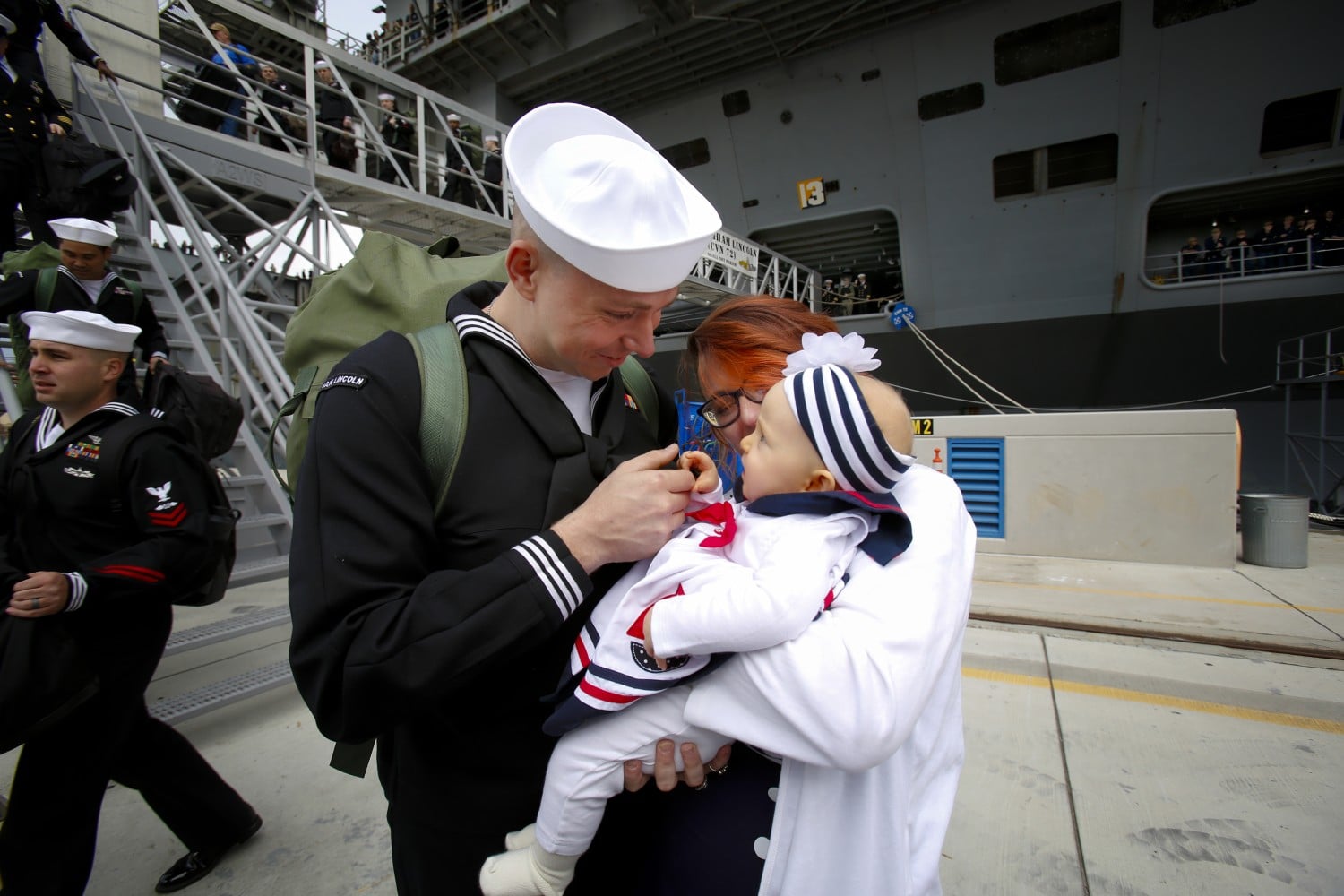 “I left my family and all my friends in October because I thought he was going to be home,” she said. “I was in my new house and I got a phone call and he said, ‘Actually, I’m not coming home (yet).'”

Lehman said that while she was excited for her husband, Austin, an aviation ordanceman, to meet their new baby, it was also a big day for the couple’s 4-year-old son, Mason.

“It’s very hard because he doesn’t understand time, so every time he asked (when his dad would be home), I would just tell him, ‘Soon,'” Lehman said. “So now he’s like, ‘You say that all the time’ and I’m like, ‘I promise, soon, buddy; this time it’s for real.'” 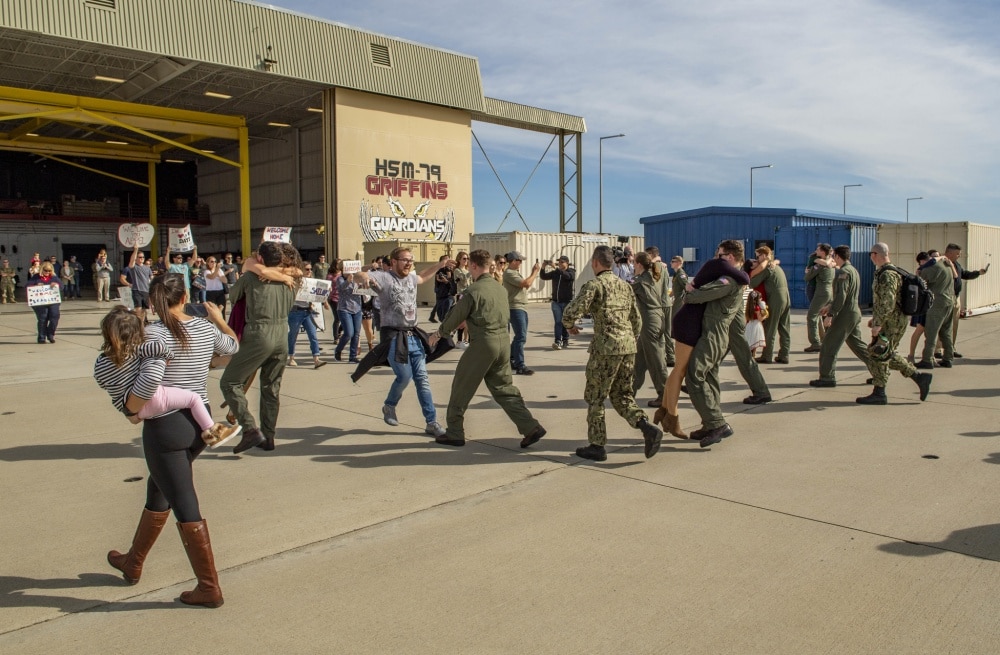 Felecia Herman waited with her 8-month-old daughter, Liana, for her husand, Ryan, who serves as a machinist’s mate on the Lincoln.

Herman held back tears as the Lincoln appeared and began its slow, tugboat-assisted push to the pier.

“I’m most looking forward to hugs — he’s always given the best hugs, and I could just cry thinking about getting one right now.”

The ship’s captain and strike group commander were among the first off the ship.

“We are so happy to finally be home and for Abraham Lincoln to be home in her new port of San Diego,” Rear Adm. Michael Boyle, commander of Lincoln’s Carrier Strike Group 12, said at a short news conference on the pier.

Boyle talked about the mission of the aircraft carriers in general and the role the Lincoln played as tensions ratcheted up with Iran over the past several months.

“If anybody tells you the carrier is no longer relevant or no longer needed, they need to have their head examined,” Boyle said. “This carrier is what kept us from going to war with Iran. The deterrence that this carrier provides allowed us to maintain peace and stability in the Middle East.”

The Lincoln left the region in mid-December, just weeks before escalating proxy attacks between the U.S. and Iran led to the killing of Iranian Maj. Gen. Qassem Soleimani by U.S. forces, which raised already high tensions in the region.

Capt. Walter Slaughter, the Lincoln’s commanding officer, thanked the crew’s families, saying he appreciated the hardships that came with the long deployment.

“We can’t do it without (their) support,” Slaughter said. “We can’t thank them enough.”

Aviation Boatswain’s Mate First Class Brian Johnson, a new dad, was one of the first sailors off the ship. He described his mood upon meeting his son for the first time as “euphoric.”

“I had to imagine what he looked like in real life,” Johnson said of 6-month-old Cameron. “All I saw was pictures, so I was just trying to figure out what he would actually look like. I didn’t know what he smelled like or how he felt, so it’s really nice to see that.”

Johnson said he’d never been to San Diego before, so he was looking forward to getting out and exploring his new city.

“I hear the burritos here are pretty good,” he said.

The Lincoln’s homecoming marks the arrival of the second of three carriers that will be permanently based in San Diego. The Theodore Roosevelt left on a planned seven-month deployment on Friday, and the Carl Vinson, which is undergoing extended maintenance in Bremerton, Wash., will return to San Diego in August, the Navy says.

Fort Bragg paratroopers killed in Afghanistan remembered for their sacrifice