More importantly, he said, the fall program renewed his faith in humanity.

“I was left for dead on the side of the road,” he said. “So, during my time in this last seven or eight years, I have lost a lot of faith in people. A lot.”

In 2011, a drunken driver pulled in front of Zollicoffer’s 1995 Kawasaki motorcycle on state Route 800. The now retired U.S. Marine Corps and Army National Guard veteran had completed three tours in Iraq and was scheduled for deployment to Afghanistan. 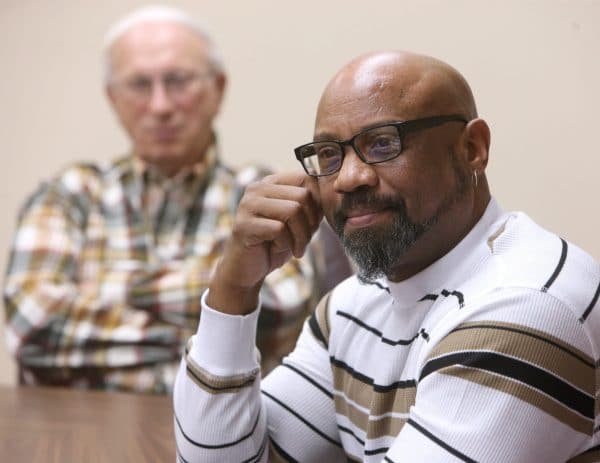 Charles Zollicoffer, a veteran who lost a leg after a motorcycle crash, talks about receiving a trike with the help of the Stark County Veterans Service Commission at its office in Plain Township. In the background is Terry Roan, of the Disabled American Veterans Chapter 38. (CantonRep.com / Scott Heckel/TNS)

Another person came across the early morning wreck and stopped to help. Zollicoffer, a 53-year-old Canton resident, spent months in a coma and had his left leg amputated at the hip.

This past Veteran’s Day, he received a modified trike at the Makers For Veterans closing ceremony. His family’s safety concerns had kept Zollicoffer from pursuing a costly trike, but they talked and accepted what it meant to him beforehand.

“I can’t even describe the feeling, when you get that wind blowing through your hair,” joked Zollicoffer, who has a shaved head.

The Colorado-based nonprofit Challenge America began the Makers for Veterans program (CAMVETS) in 2019. It brought together volunteers with various expertise to solve challenges posed by veterans. 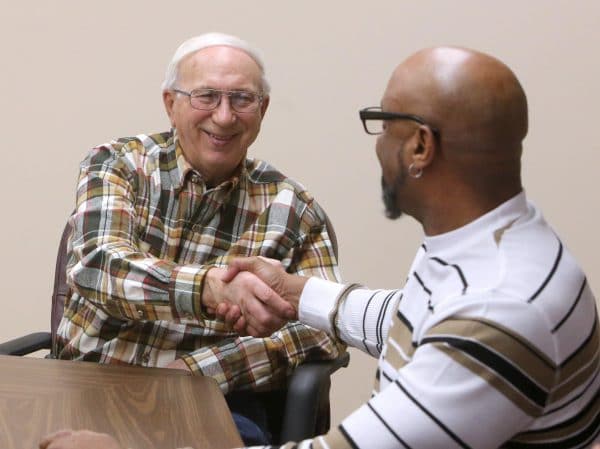 Terry Roan (left), of the Disabled American Veterans Chapter 38 shakes the hand of Charles Zollicoffer at the Stark County Veterans Service Commission offices in Plain Township. Zollicoffer, a veteran who lost a leg after a motorcycle crash, received a trike with the help of the commission and donors, such as the DAV. (CantonRep.com / Scott Heckel/TNS)

Dallas Blaney, executive director of Challenge America, said the inspiration came from a similar initiative in Israel. Challenge America members participated in the international program and wanted to recreate the experience in the United States.

Blaney described it as “human-centered design applied to the veterans space.” The process begins by asking participants, selected from across the nation, what they want to do that they haven’t been able to.

“That forces the veterans to frame their challenges in a positive way,” Blaney said.

A team — built “from scratch” — with skills relevant to the individual’s challenge then meet at a kickoff event. That is followed by about eight weeks of planning and work culminating in a three-day workshop.

CAMETS then works with the U.S. Department of Veterans Affairs and other partners to identify prototypes to patent and undergo additional product development.

“So that we can get those promising solutions out to market where other veterans and civilians, too, can benefit from these things,” Blaney said. 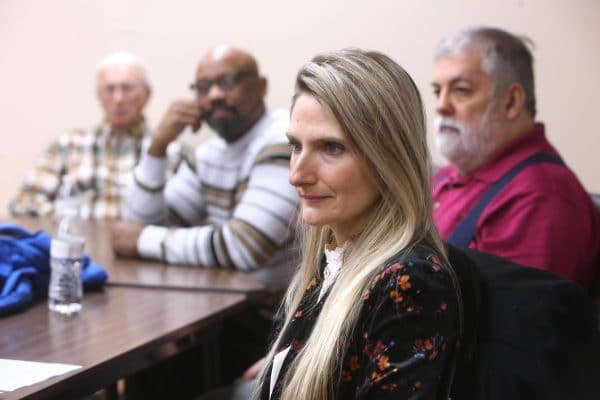 Dana Stilianos, outreach specialist with the Stark County Veterans Service Commission, talks about Charles Zollicoffer, receiving his motorcycle, at their offices in Plain Township. Behind her is Terry Roan (left) and David May of the Disabled American Veterans Chapter 38 and Charles Zollicoffer (second from left.) (CantonRep.com / Scott Heckel/TNS)

Blaney said a digital service dog application designed to help a veteran with post-traumatic stress disorder is expected to be the first product ready for market.

Both programs were held in the Cleveland area, not far from where Blaney grew up. He said the region has a great blend of medical, manufacturing, entrepreneurial, academic and innovative institutions.

The Cleveland Clinic, Bio Enterprise and St. Edward High School are some of CAMVETS’ partners.

“It just seemed like such an amazing fit, and it’s a very friendly place to do business,” Blaney said.

The nonprofit likely will host another program in Northeast Ohio this year, but only one. He said CAMVETS plans to expand to a new city.

De Ann Williams, executive director of the Stark County Veterans Service Commission, heard about a CAMVETS opening during a conference and nominated Zollicoffer. It was the first she’d heard about the organization, but she thought the program might produce a longer-lasting prosthetic leg.

Zollicoffer used to play basketball and entered the program thinking he’d leave with a prosthetic for athletic activities.

“With the level of my amputation, that was close to impossible,” he said. “So they started asking questions.”

Zollicoffer, who grew up riding motorcycles, then told his team he’d like to ride again.

“As a motorcycle enthusiast myself, I understood and respected that,” Williams said.

Zollicoffer worked ‘hand-in-hand” with his team as the plan evolved — from modifying his prosthetic leg to modifying a three-wheeled motorcycle. However, he said he wasn’t privy to the end product until the Veteran’s Day reveal.

When he was asked to visit a Harley Davidson store as the project wound down, Zollicoffer began to wonder if he’d get a new trike. He later learned that sitting on a $35,000 motorcycle was more for measurement.

The engineers, students and other makers on Team Z turned a two-wheel 1972 Harley Davidson into a trike by replacing the rear portion with wheels from a 1978 Mustang. They also moved the typical, left-side motorcycle gears to the right.

“So, it was a totally customized job,” Zollicoffer said.

After he saw the trike, Zollicoffer saw the executive director of the Stark County Veterans Service Commission.

“I turned around and there’s De Ann standing there,” he said. “That’s when it became clear to me that the whole outreach team got together and they did this thing.”

CAMVETS has paid the “lion share” of most projects, Blaney said. The local commission, though, was tasked with raising $5,000 to buy the bike, which was complemented by donated parts.

Williams said she believes the plan to have the bike donated didn’t work out, so the commission reached out to area service organizations. They had the money within a few days.

“I was just beside myself,” she said. “I couldn’t believe the community came together like that.”

DAV Commander David May said the project aligned with the group’s mission to assist disabled veterans.

Those involved with CAMVETS said they were glad to learn of the program and plan to volunteer or recommend it to other veterans in the future. Zollicoffer said he made “lifelong friends.”

“We’ll definitely stay in touch with CAMVETS,” Williams said. “I think that that’s definitely going to be a partnership that I hope lasts for a long time.”