Rescuers plucked three people from atop the 30-foot-tall border barrier near Otay Mesa early Sunday, after they got stuck while trying to illegally cross the U.S.-Mexico border, Border Patrol officials said Tuesday.

Border Patrol agents spotted the three hanging from the barrier — which was wet and slippery in dense fog — about two miles east of the Otay Mesa border crossing just after midnight, the agency said in a news release Tuesday.

The trio — two women and a man — was found atop the second of two parallel barriers on the U.S. side of the border. 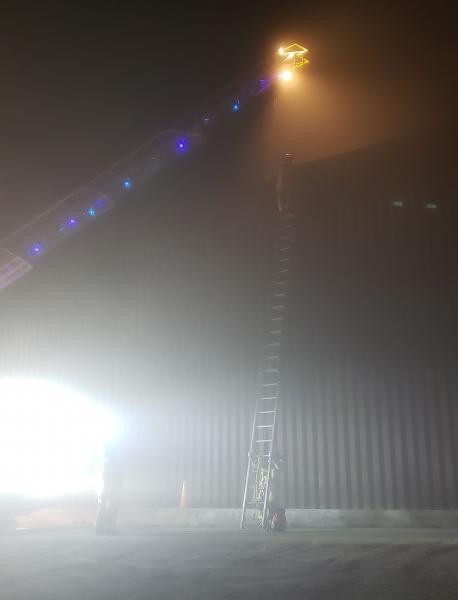 San Diego Fire Department had to use their ladder truck to rescue three people in the dense fog. (Customs and Border Protection/Released)

Closest to the border is an 18-foot-tall barrier, replaced over the last year or so. About a 150 feet north is the second and taller barrier, where the trio was stuck. That section of barrier was also recently replaced, and is part of a stretch that will run 14 miles inland from the Pacific Ocean, Agent Jarred Decker said.

Border Patrol agents called the San Diego Fire-Rescue Department to help get the three people down. Fire crews were able to reach them with a ladder.

The trio were made of up an 18-year-old woman, a 20-year-old woman and a 36-year-old man. All were from Mexico, the agency said, and all had illegally crossed the border.

“These three were very fortunate to not have fallen from the top of the wall which could have resulted in serious injury or death,” San Diego Sector’s Acting Chief Patrol Agent Aaron Heitke said in the news release. “These dangers are not important considerations to smugglers, who place an emphasis on profits over safety.”