Norfolk Naval Shipyard broke ground Thursday for a $200 million upgrade of historic Dry Dock 4, one piece of a larger puzzle that will help the Navy’s oldest public yard maintain the modern fleet.

Dry Dock 4 opened in April 1919, the first of three dry docks built during the yard’s World War I expansion. More than 1,000 feet long and 40 feet deep, it was one of the largest concrete structures in the world when it opened.

Over the years, it has welcomed a number of storied ships, including the battleship USS Arizona, modernized in Norfolk a decade before it was sunk during the Japanese attack at Pearl Harbor in 1941. 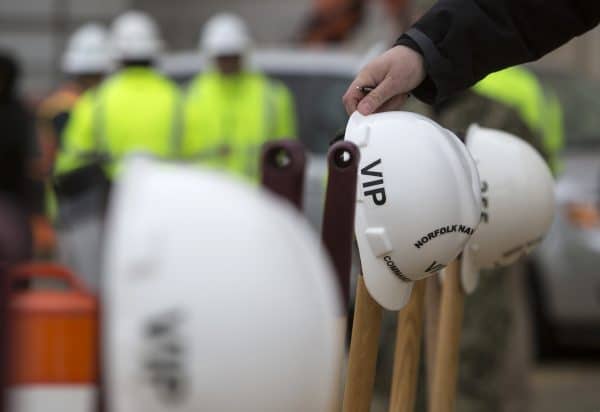 The yard currently uses it to maintain and overhaul nuclear-powered submarines. The 33-month renovation is aimed at keeping it in that role, but with improvements that should allow for more efficient operation, officials said.

Work will involve replacing concrete on the floor and sidewalls and restoring all mechanical and electrical equipment.

The project is part of a $21 billion Navy plan to upgrade its four public nuclear shipyards, which were originally designed for sailing ships or conventionally powered ships, not nuclear attack submarines or aircraft carriers. The plan will take 20 years to complete, requiring future commitments from Congress and the Navy. 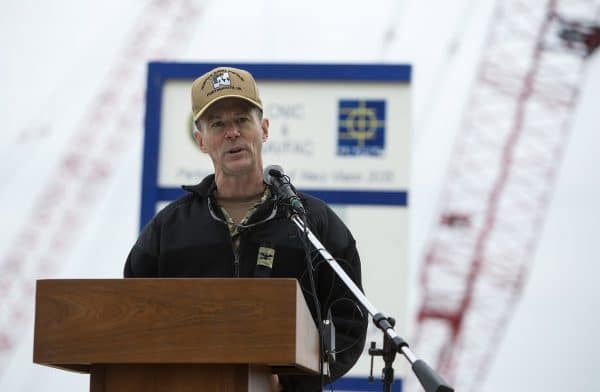 Capt. Kai Torkelson, commander of the Norfolk Naval Shipyard, speaks during a groundbreaking ceremony for the renovation of Dry Dock 4 on Thursday, Jan. 23, 2020, in Portsmouth, Va. (TNS)

“This is the first big, tangible piece of this investment we are making in you,” said James Geurts, assistant Navy secretary for research, development and acquisition.

The Navy has prioritized modernizing its public yards because it faces a backlog of maintenance work. In some cases, it has outsourced work to private yards like Newport News Shipbuilding.

A federal audit released last month said Navy ships have spent some 33,700 more days in maintenance than expected since fiscal year 2014. Insufficient shipyard capacity and a shortage of skilled workers were two factors identified by the Government Accountability Office.

Geurts praised the yard and its workers as “a national treasure” and said it’s up to the Navy and Congress to upgrade the facility and provide employees with the tools they need. 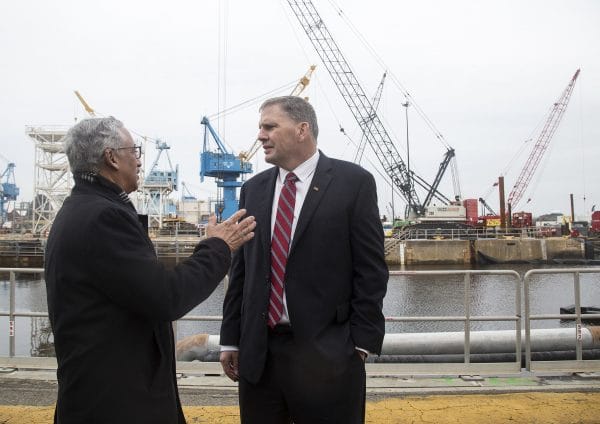 Rep. Bobby Scott speaks with James Geurts, Assistant Secretary of the Navy for Research, Development and Acquisition, following a groundbreaking ceremony for the renovation of Dry Dock 4 at Norfolk Naval Shipyard on Thursday, Jan. 23, 2020, in Portsmouth, Va. (TNS)

But he also issued a challenge to the local workforce.

The dry dock renovation is the latest and largest in a series of recent upgrades for Norfolk.

In June, the yard dedicated a new submarine maintenance facility. It combines maintenance, production and support functions at one location near submarine dry docks and piers. Representing an investment of $9.9 million, the building is designed to withstand a 500-year flood and bear the brunt of a Category 4 hurricane.

In July, officials broke ground on a $64.7 million production training complex that will consolidate training at 26 locations into a single, 157,000-square-foot building. It will serve as training center for nuclear and non-nuclear work, plus production and operations.

In August, they cut the ribbon on a $30 million makeover of historic building M-32, home to 200 shipyard employees. The push for this project started in 2014, and workers had to install modern utilities while adhering to state historical guidelines. The building dates back to 1905.

Working around historic properties is nothing new for the yard.

It traces its roots to 1767, when merchant Andrew Sprowle formed the Gosport Shipyard under the British flag.

Although located in Portsmouth, it acquired the Norfolk name in 1862, according to a history of the yard compiled by Naval Sea Systems Command.