Zach Smith carefully grinds up the pill at the kitchen counter, a mask covering his mouth so he doesn’t breathe in particles of dust, hands encased in plastic gloves.

While he prepares a syringe containing the crushed pill mixed with juice, his young son grips the edge of the baby gate at the kitchen entrance and watches, big blue eyes serious, his curls a halo around his head. 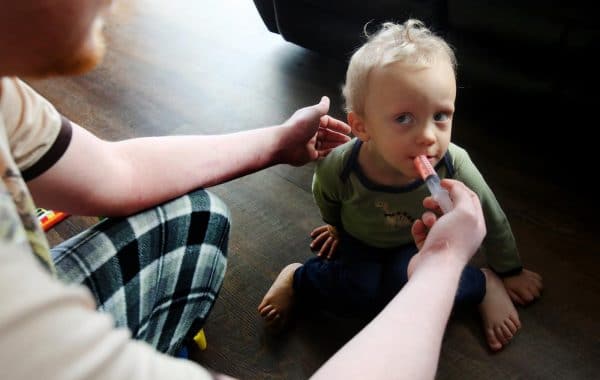 Sam Smith sits on the living room floor and obediently opens his mouth, drinking in the chemo that his parents hope will save his life.

Amanda Smith said it’s just one more thing she hates, having to crush up the medication and feed it to her son.

“It’s pretty much a poison,” she said.

It breaks her heart each time.

Sam Smith was born without complications on Jan. 24, 2018. His big sister, Emma, is a year older and is not only his playmate and protector, but she loves to play doctor.

“She told me she wanted to be a doctor to fix bubba,” Amanda said. 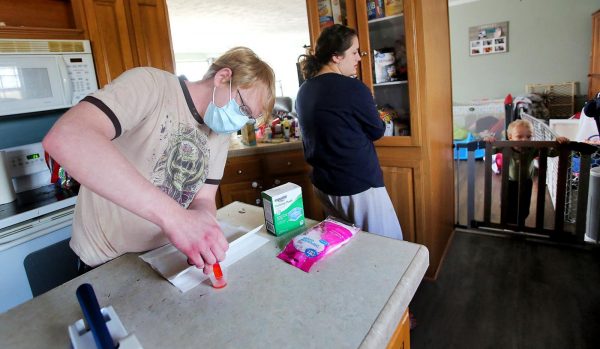 Emma has her own little doctor kit she carries around and during one hospital visit, a nurse gave her a teddy bear with a port, just like the one her brother had.

The Smiths’ story began back in high school.

The couple were friends and when Zach joined the Marine Corps, they began writing letters back and forth to each other while he was at boot camp.

“When he came back into town, we hit it off really well and have been together ever since,” Amanda said.

“He was born, everything was perfect,” Amanda said. 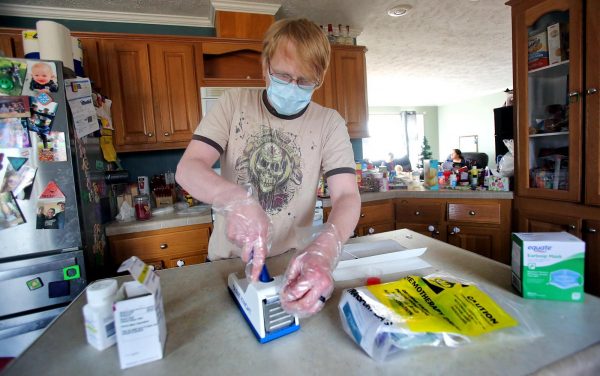 The delivery went smoothly, and he appeared to be a healthy baby boy.

Amanda worked at Shelby Childcare, but she said Sam and Emma seemed to stay sick all the time with bronchitis and other illnesses and she was constantly taking them to doctor appointments. Eventually she decided to stay home with the children.

One morning, about a month after leaving her job, she noticed Sam’s eyes were shaking.

She thought it was a fluke, but then his head began wobbling just a little. It was a subtle movement, but it concerned her enough that she took him to the pediatrician who suggested he should have his eyes checked. At first, they were told Sam had Spasmus Nutans, a rare disorder that affects young children and infants and was expected to disappear by age 2.

Just to be safe, an MRI was scheduled.

As they waited in recovery, they started to get nervous. They expected to find out the results in 30 minutes, but the day ticked by. Eight hours later, their pediatrician broke the news to Zach.

“They found a mass that was fairly large,” he said. “They weren’t 100 percent sure what it was or how it got there.”

After further testing, Zach and Amanda were told their son had astrocytoma, a very large tumor that grows like cancer, but is not malignant.

It is located directly behind Sam’s eyes. Surgery could kill him, or at the very least would leave him blind, in need of a lifetime of hormone injections and developmentally delayed.

Zach said the tumor is roughly the size of a baseball and has been growing since he was born. So far, symptoms have been minimal. He has a head tick and shaking eyes.

Lately he’s been having some issues with his gait.

They worry the tumor is growing.

Following the diagnosis, Sam began chemo treatments, but the infusions caused seizures. Then, after a biopsy was completed, it was discovered the tumor had mutated and was resistant to standard chemo.

Currently, he is taking an experimental, non-FDA approved chemotherapy drug called Zelboraf that has been used to treat melanoma.

Following his son’s diagnosis, Zach has researched, read and diligently learned about astrocytoma. He’s looked up case studies and talked to other parents of children with brain tumors.

It’s been difficult diagnosis to accept.

“The way I can describe it, it’s like getting hit by a bus a million times,” he said. “As parents, we’re fixers, and there’s not a thing we can do to fix it.”

Amanda said life has been a blur of appointments, hospital visits and tests. There has barely been a moment to slow down and think. Sometimes, that’s a blessing.

“We wouldn’t wish this on our worst enemy,” she said.

Throughout the week he has appointments with his neurologist, oncologist, pediatrician, dietitian as well as occupational therapy, speech therapy, and soon, physical therapy.

She hopes it stays that way.

Despite his diagnosis, the family was told Sam does not qualify for Social Security disability and have had to fight for Medicaid. Zach works at Curtiss-Wright as CNC maintenance mechanic and said his employer has been compassionate and helped him obtain FMLA when he needed days off to take Sam to various appointments.

Through all of the procedures and potent medications, Sam remains bubbly and happy.

He chatters about his Paw Patrol hat and works on a magnetic puzzle with Emma.

His mother said he is always smiling, and it’s often difficult to tell when he’s not feeling well.

“Even nauseous and sick, he just radiates happiness. He’d be flirting with the nurses. He’d still have love for everyone. That’s been a blessing,” she said. “He’s our hero.”