John Dees, a U.S. Army veteran who served in Iraq, was found dead Jan. 13, 2020, in a wooded area off Pecan Road on Tallahassee's west side. Dees, who struggled with personal demons after coming home from the war, had been shot. [Photo: Special to the Democrat/TNS)
January 22, 2020 Jeff Burlew - The News Journal
Share
Tweet
Flip

Military clockwork — if not fate or instant attraction — brought John Dees and Kimberly Crosby together.

They met in 2006 after both were stationed at the Army’s Fort Lewis outside Tacoma, Washington. Young and starting out in life, he worked as an air defense early warning system operator; she was a human resources manager. Their names were so close alphabetically that wherever one lined up, the other inevitably would follow.

“Everywhere we went, we were always together,” she said. “I think it kind of skipped friendship and went straight to romance.”

Charming and good-looking, Dees even got her into country music, something she didn’t think possible. The two bonded listening to Brad Paisley’s “Mud on the Tires” together. Three months after meeting, they got married at the courthouse. 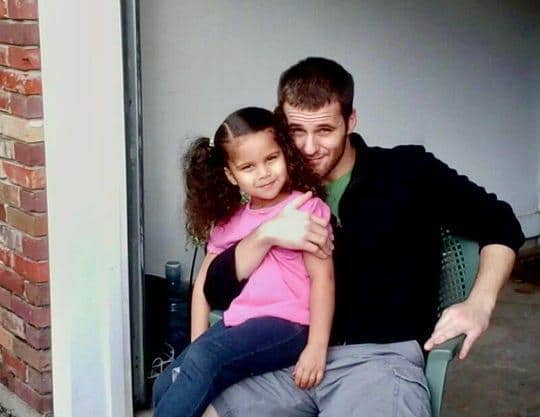 John Dees, a U.S. Army veteran who served in Iraq, pictured with his daughter. Dees was found dead Jan. 13, 2020, in a wooded area off Pecan Road on Tallahassee’s west side. Dees, who struggled with personal demons after coming home from the war, had been shot. [Photo: Special to the Democrat/TNS)

“I just remember riding in the car with him, and he rolled the window down, and he said, ‘See, this is how I know we’re supposed to be together.’ “

But military assignments and war would separate them. And the battlefield would forever haunt Dees, who suffered a head injury in Iraq and fell into addiction after coming home, an unforeseen consequence of pain pills the Army gave him for a simple toothache.

Eventually, Dees — a New Orleans native who grew up in Virginia — walked away from his family before falling off the map entirely. He turned up years later for reasons unknown in Tallahassee, where he tried to make his way mowing lawns and blowing leaves in the Seminole Manor neighborhood.

And while he dodged death serving his country in Iraq, he couldn’t escape the violence on Tallahassee’s streets.

Investigators with the Tallahassee Police Department, acting on a tip, found Dees’ body Jan. 13 in a wooded area off Mission and Pecan roads. In an effort to identify him, police released composite images of Dees on social media, prompting people to call and confirm his identity.

A TPD spokesman said Dees had been shot. But the department has released few other details, including whether there are any suspects in the homicide, the city’s first of 2020.

TPD did not release Dees’ name because of its interpretation of Marsy’s Law, a constitutional amendment designed to protect the rights of crime victims and their families. However, his wife confirmed his death in an interview with the Tallahassee Democrat, as did several people who got to know him in town.

“I’m angry, and I’m hurt,” said Kimberly Dees, who had no idea he had been living in Tallahassee. “And I’m just so blown away. We were trying to move on with our lives. And we just prayed that he was OK. And now we wake up to this nightmare.”

A few months after meeting at Fort Lewis, Dees and Crosby learned they would be heading off to different corners of the globe.

Dees would go to Iraq, where bombings and bloodshed were a grim everyday reality. Crosby was assigned a post in Germany.

They decided to make it official first, running down to the courthouse to get married, with his roommate serving as best man. It wasn’t long before they were expecting a daughter, who arrived in 2007, a month after Dees left for the Middle East.

“He was an amazing person before he went over,” she said. “He loved baseball. He loved music. He liked to dance. He was goofy. He always thought he was so handsome. And he was a very handsome man. I think deep down beyond anything, he really loved his daughter.”

Dees lost friends in Iraq and survived his own brushes with death, including an explosion that knocked him off his feet. He fell and hit his head in the blast, his wife said, leaving him with a serious brain injury.

“The things he told me about his deployment are better left unsaid,” she said.

By the time he returned home to Washington state more than a year later, he was suffering from anxiety and showing signs of post-traumatic stress syndrome. He was forgetful and confused. There were times he wasn’t sure where he was.

“John was different when he came back from Iraq,” she said. “It changed him. A lot of it wasn’t for the better. He was really sick, and none of us knew how to help him. I tried. I really tried. I wanted our family to work, and I wanted him to be a part of his daughter’s life. But he was just sick.”

Their home life fell apart. He wrecked the car, the family lost the house and Dees got into minor scrapes with the law. He was honorably discharged from the Army and got help from the Department of Veterans Affairs. But he couldn’t shake his addiction.

“It wasn’t the VA that failed him,” his wife said. “It was the Army. When John started showing signs he was sick and it was more than apparent that he had an addiction, it was easier to get rid of him than to take care of their brother-in-arms. He was just useless to the Army.”

The Army released few details about his service. “Private Dees served in the Army as an air defense enhanced early warning system operator from August 2004 to October 2011,” an Army spokesman said in an email. “He deployed to Iraq from March 2007 to May 2008.”

Veteran ‘fell through the cracks’Dees left his family and arrived at some point in North Carolina, though his family lost track of him after that. Longtime residents of Seminole Manor, a close-knit Tallahassee neighborhood with its own volunteer food pantry and children’s library, said he showed up about a year ago.

Adrian Fogelin, a writer who lives in the neighborhood with her husband Ray Faass, met him one day at the food pantry, located in her late father’s home. Dees, who seemed affable and bright but confused and forgetful, was trying to find his cellphone.

“That was chronic for him,” Fogelin said. “He could never quite put his hands on something.”

Dees, who got $800 a month in disability pay, charmed Fogelin and many of her neighbors. He did yard work for spare cash but often volunteered to do it for free. He seemed kind and helpful but damaged from the war. His death was a shock to some, but not others who knew about his addiction.

“I think the news is just beginning to shimmer through the neighborhood,” Fogelin said. “I had a call yesterday from a next door neighbor who said, ‘Was that John in the photograph?’ And she was very sad when she heard it was John. So many of us knew him, and so many of us really liked him.”

He rode his bike around the neighborhood with a trailer attached holding his lawnmower, blower and trimmer, equipment he would pawn off for cash only to buy it back again. He was a regular at the food pantry but stood out because of his eagerness to help, Fogelin said.

“John had a good heart,” she said. “He was sweet. He had a mind that could have been used for something more.”

“He absolutely fell through the cracks,” Faass said. “I know it’s hard. But if we’re going to send these guys to war, we’ve got to cover them. We’re not as good as we could be. I think we really try. What we have to do really is stop sending our kids to war.”

‘Some demons you can’t beat’People in the neighborhood gave Dees rides to the store, the VA and the methadone clinic, where he got maintenance meds to help him stay off street drugs. But Bruce Thompson, who lived near Dees, said he couldn’t kick his dependence on pills.

“He thought he needed them because I guess that’s what he got when he was in the Army,” Thompson said. “But that was the forward thing on his mind — that’s all he ever talked about. He would go up to people he didn’t even know and ask them if they had anything.”

Dees rented a room in a modest house but had troubles with the owner, who filed a stalking complaint against him, according to court records. He moved into another place nearby but had to move out after the owner went into the hospital.

Thompson, who met him a few months ago, tried to help. But around the new year, Dees showed up at his house with a bottle of Xanax.

“He finally found what he was looking for,” he said. “And that’s when I had to tell him to go home and just leave me alone. I didn’t want to be around that. It’s bad news.”

About the same time, a woman took him in at her Mission Road apartment in an act of charity. The night of Jan. 9, she called police to report he had become loud and combative, according to TPD records. Officers determined he had residency rights and took no action.

Less than four days later, Dees was found dead, in an area near the apartment. Police declined to discuss a possible motive, citing the ongoing investigation.

Kimberly Dees said her family had been looking for him for years. They were dreading the worst.

“He was sick,” she said. “And he was easy to take advantage of because he was sick. He wanted to get better. But there are some demons you can’t beat.”