Flying for the sake of freedom: Civilians are able to relive WWII history on bomber plane in Jacksonville

The "Ye Ole Pub" vintage B-17 takes off Tuesday at Jacksonville Executive at Craig Airport for a media tour before this weekend’s flights for the public. [Will Dickey/Florida Times-Union/TNS)
January 26, 2020 Sara Albertelli - The Florida Times Union
Share
Tweet
Flip

Stepping inside the B-17 Flying Fortress, many would think they are being transported back in time as airmen who battled in the skies.

The time is World War II. Tensions between the countries that make up the Axis and those that make up the Allies are at an all-time high, and casualties are racking up by the millions to create the deadliest conflict known in human history.

Soaring in the middle of the sky, a young American crew is tasked with a high-stakes bombing mission into Germany. Little did they know that half of them would be killed or wounded and at the mercy of a German pilot who escorted their damaged aircraft to safety. 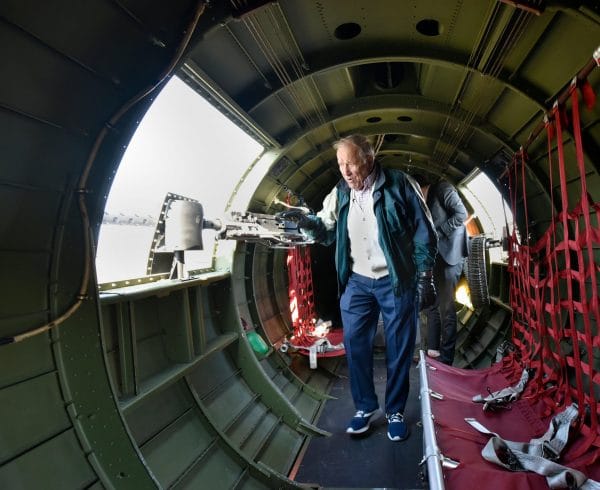 World War II veteran Harry Duccilli exits the “Ye Ole Pub” B-17 after a flight Tuesday as part of The Liberty Foundation’s 2020 A Salute to Veterans Tour. [Will Dickey/Florida Times-Union/TNS)

This story of a German pilot risking his life to save the 379th bomb group of the 8th Air Force is detailed in Adam Makos’ best-selling book, “A Higher Call.” To pay tribute to this story, the B-17 “Ye Olde Pub” was created as a historical replica for passengers to ride in.

Jacksonville is the first stop for The Liberty Foundation’s nationwide “Salute to Veterans Tour” in 2020. Members of the public and media are given the opportunity to see and fly in the “Ye Olde Pub,” the most influential bomber of WWII, along with a P-51 Mustang.

The public event will take place Saturday and Sunday at the Jacksonville Executive at Craig Airport, Sky Harbor Aviation, with rides starting at 10 a.m. B-17 rides are priced at $475 per passenger and $1,195 to $1,995 for the P-51 flights. However, all are welcome to tour the inside of the B-17 while it is on the ground free of charge with donations encouraged. 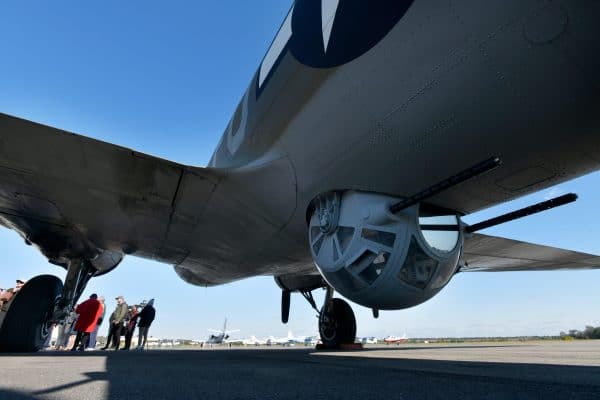 Journalists and veterans gather around the “Ye Ole Pub” vintage B-17 before taking a ride Tuesday in Jacksonville. [Will Dickey/Florida Times-Union/TNS)

Harry Duccilli, a WWII veteran pilot, actually flew the B-17 fighter and still freshly recalls the war as a period that would come to shape his entire life and the lives of many.

Duccilli was a pilot for the 8th Air Force and successfully carried out approximately 30 bombing missions over Germany. While he was not part of the 379th group, he remembers hearing about the inspiring story after it happened.

He said none of his crew members was lost during his missions, and he himself had never received any serious injuries.

Tuesday, Duccilli was able to board a B-17 for the first time in years. Strangely enough, when exiting the aircraft, Duccilli bumped his head and received a small cut on his forehead, the first real injury he said he has received after all his time of serving. 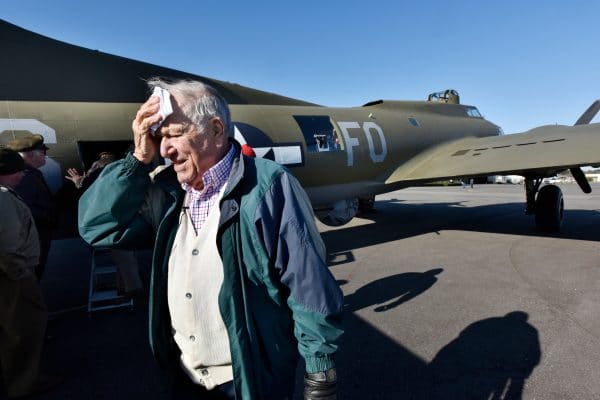 Veteran Harry Duccilli flew 30 missions as pilot of a B-17 during World War II without a scratch, he said, “until today,” when he bumped his head exiting the “Ye Ole Pub” B-17 at Jacksonville Executive at Craig Airport. The visiting vintage Flying Fortress will be joined by a P-51 Mustang as part of The Liberty Foundation’s 2020 A Salute to Veterans Tour on Saturday and Sunday. [Will Dickey/Florida Times-Union/TNS)

Regardless, Duccilli enjoyed being able to be a part of the event that honors veterans.

“We do not really ever talk about what we went through during the times of war,” he said. “We don’t even really tell our families. Many of our friends were all in the service, and we don’t really want to compare our sufferings. So having an event like this really helps us remember and talk about our experiences.”

The B-17 was named the “Flying Fortress” for the sheer power that it exercised in the skies. It saw action in every theater of operation during WWII.

The P-51 Mustang also has an impressive history as it was built in 1944 for North America by Australia’s Commonwealth Aircraft Corp. in Melbourne. The aircraft was also used by the Australians as part of atomic bomb testing after WWII.

On average, The Libery Foundation nonprofit said it costs about $5,000 per hour for each of the bomber flights. The organization spends about $1 million each year to keep the Ye Olde Pub flying.

The public’s interest and generous donations are an essential part of what keeps the Ye Olde Pub in the air rather than stationed in a historical museum.

It is estimated there are only around 500,000 veterans still alive to remember their stories, according to the U.S. Department of Veterans Affairs. On average, approximately 372 WWII veterans pass away every day, making it a rarer opportunity to meet with them and hear their experiences.

“Last Christmas the last member who was on my crew passed away,” Duccilli said. “It’s quite strange to think that now, after so many years, I am the only one left.”

Members of the public will be given the chance to hear even more stories of the war with the little time that is left at the “Salute to Veterans Tour.”

As the attendees of the media day experienced, participants will be able to soar across Jacksonville, not only taking in the breathtaking sights, but the awe of what it means to fly on a historic bomber.

They will be able to stand, even if for a moment, in the shoes of the airmen who bravely boarded and fought on aircraft for the sake of freedom.