Convicted N.J. terrorist gets another life term for trying to kill cops in gunfight after bombings

Convicted terrorist Ahmad Khan Rahimi was sentenced to life in prison Friday after a Union County jury for attempting to kill five Linden police officers in a shootout after they identified him as the man wanted in bombings throughout New York and New Jersey.

Rahimi, a naturalized U.S. citizen born in Afghanistan, is already serving multiple life terms for setting off a pressure cooker in Manhattan in September 2016 that injured dozens. He still faces federal charges for planting bombs around the same time in Elizabeth and a 5K race in Seaside Park.

Superior Court Judge John Deitch noted that Rahimi had not shown “one iota of remorse” for his actions. 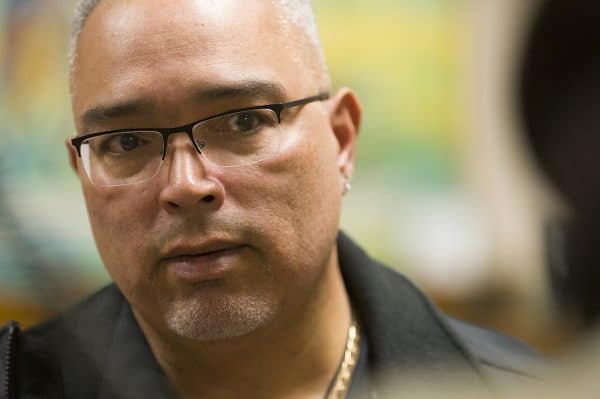 Linden Police Officer Angel Padilla recounts the events of September 19, 2016, the day he was shot by Chelsea Bomber Ahmad Khan Rahimi, after Rahimi’s sentencing for the attempted murder of five policemen by Judge John Deitch at the Union County Courthouse in Elizabeth on Friday morning. 01/24/2020 (TNS)

“The defendant’s actions were shocking and carried out with a callous disregard for the value of human life,” Deitch said before he handed down Rahimi’s sentence. “His actions were completely abhorrent to civilized society.”

Rahimi, 31, who lived in Elizabeth at the time, was given the opportunity to speak, but he declined. He was convicted in October on multiple counts of attempted murder, aggravated assault and weapons offenses.

Retired Linden police officer Angel Padilla came upon Rahimi while he was resting in a vestibule of a tavern on Elizabeth Avenue. A bulletproof vest saved Padilla from being seriously injured after Rahimi shot at him.

Padilla did not give a victim impact statement at the sentencing. He told NJ Advance Media after the sentencing that he never expected to come upon the man who was wanted across multiple states.

“We were there to do a job,” Padilla said. “If I had to do it all over again, I will. The whole process – from the day it happened to today – it was long. But again, I’m grateful for friends of mine.”

Rahimi shot at other responding officers as well. He was also shot multiple times but survived.

His apprehension in Linden ended a massive manhunt that ensued after pipe bombs were found in Elizabeth by two men – later lauded as heroes – that authorities say were similar to the ones found in Seaside Park.

His public defender previously argued that Rahimi was acting in self-defense in the gun battle. Prosecutors, however, argued that he intended harm on the officers because a journal that was found in his pocket read “Gunshots to your police. Death to your oppression.”