Border Patrol agents transfer migrants apprehended on the Tohono O'odham Nation for transport to a facility in nearby Tucson, Ariz. Located on the U.S.-Mexico border in Arizona, the sprawling and sparsely populated reservation covers more than 2.8 million square miles and has long been a popular entryway for smugglers trafficking people and drugs into the U.S. (Luis Sinco/Los Angeles Times/TNS)
January 24, 2020 The Monitor
Share
Tweet
Flip

According to an agency news release, on Friday evening agents at the Falfurrias checkpoint discovered 11 people inside a trailer filled with pallets of flour. 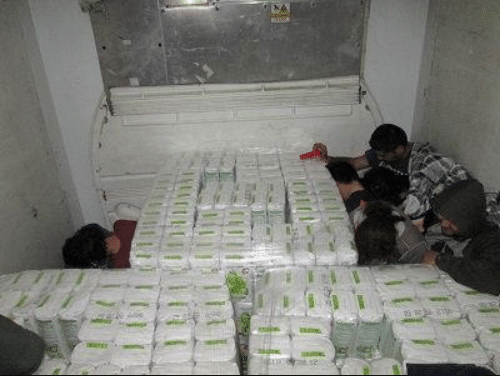 The immigrants were from Honduras, El Salvador and Mexico.

Sunday night agents at the Javier Vega Jr. checkpoint in Sarita found nine immigrants during a secondary inspector of a tractor trailer right loaded with produce. The migrants were from Mexico and El Salvador.

Seventeen immigrants were discovered Monday morning at the Falfurrias checkpoint during an inspector of an 18 wheeler.

In all, 37 people were processed by Border Patrol and face deportation.