Jessica Purcell, a captain in the U.S. Army Reserve, was pregnant with her first child when she noticed a swollen lymph node in her left underarm.

Health-care providers at a MacDill Air Force Base clinic told her it was likely an infection or something related to pregnancy hormones. The following year they determined the issue had resolved itself.

It hadn’t. A doctor off base found a large mass in her underarm and gave her a shocking diagnosis: stage 2 breast cancer.

Purcell was pregnant again. Her daughter had just turned 1. She was 35. And she had no right to sue for malpractice. 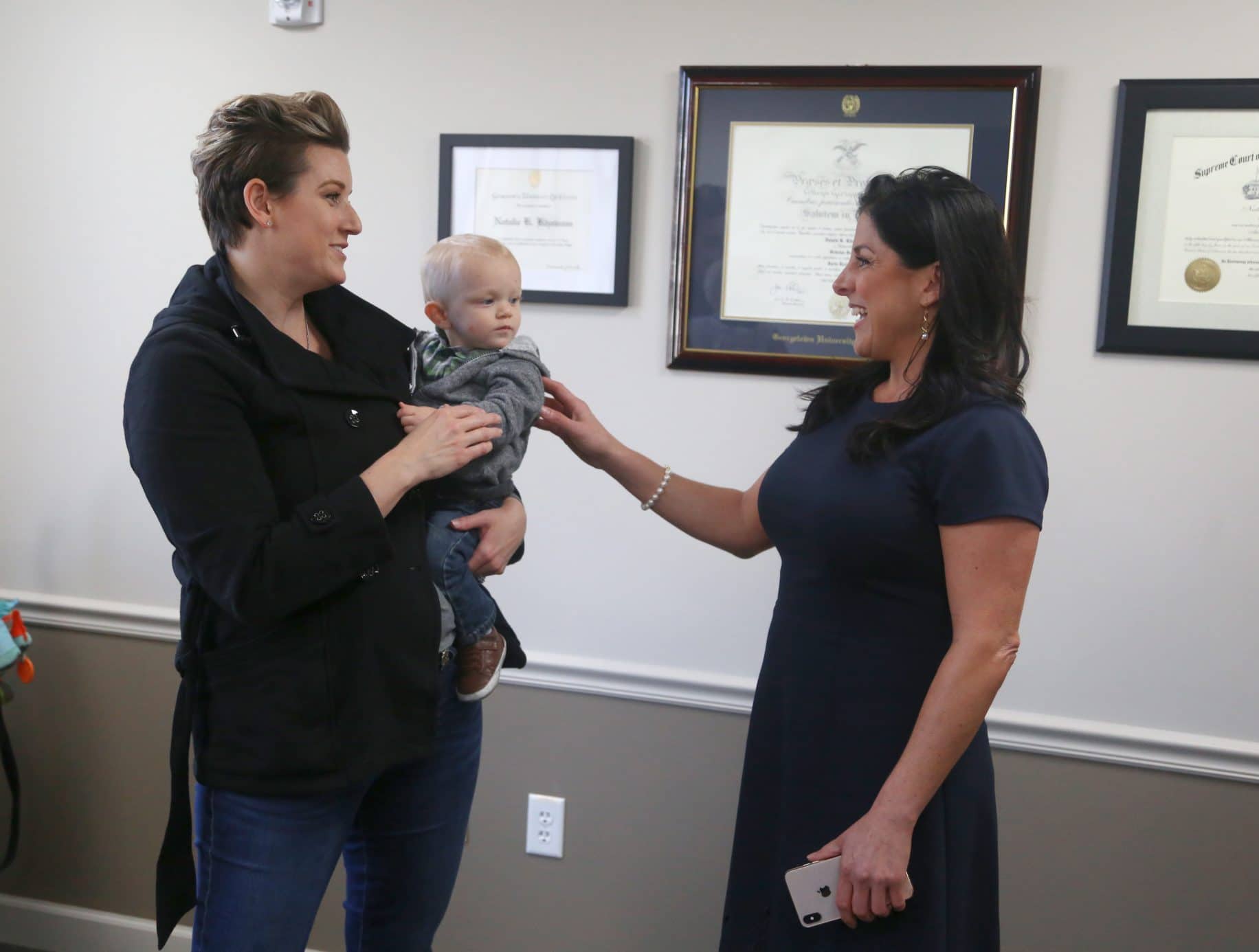 Jessica Purcell of St. Petersburg, left, a captain in the Army Reserve, was pregnant with son Jameson when she was told at a MacDill Air Force Base clinic not to worry about lumps under her arm. She now is diagnosed stage 4 cancer. Jameson is 10 months old. She is represented by Tampa attorney Natalie Khawam, right. (Tampa Bay Times/TNS)

A 1950 Supreme Court ruling known as the Feres doctrine prohibits military members like Purcell from filing a lawsuit against the federal government for any injuries suffered while on active duty. That includes injury in combat, but also rape and medical malpractice, such as missing a cancer diagnosis.

Thanks in part to Tampa lawyer Natalie Khawam, a provision in this year’s national defense budget allows those in active duty to file medical malpractice claims against the government for the first time since the Feres case.

With the Department of Defense overseeing the new claims process, the question now is how fairly and timely complaints will be judged. And whether, in the long run, this new move will help growing efforts to overturn the ruling and allow active duty members to sue like everyone else.

In 1946, Congress passed the Federal Tort Claims Act allowing private citizens to file civil lawsuits against the federal government. The act included a key exception: injuries tied to combat could not serve as the basis of a claim. 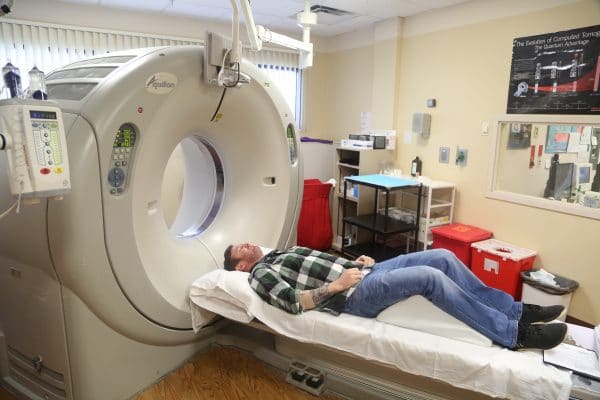 Green Beret Richard Stayskal, based at Fort Bragg in North Carolina, undergoes a scan at the University Diagnostic Institute in Tampa. Stayskal has advanced lung cancer and is being treated at Moffitt Cancer Center. (Tampa Bay Times/TNS)

The Supreme Court then clarified this exception when it took up the Feres case. After Lt. Rudolph Feres died in what his widow alleged was a preventable barracks fire, she tried to sue for negligence.

Instead, the high court ruled that the government is not liable under the Federal Tort Claims Act for any active duty service members’ injuries “incident to service.” However, the phrase was never clearly defined.

In the years since the landmark 1950 ruling, “incident to service” has come to cover military members in a variety of scenarios. They include a man given LSD without his consent as part of an experiment, a woman set on fire by an Army civilian, sailors who drowned on a Navy recreational rafting trip, and a woman who died in childbirth at a naval hospital.

“It will encapsulate everything that’s done by a member of the military,” said Dwight Stirling, founder and chief executive of the Center for Law and Military Policy nonprofit.

Efforts to overturn the ruling through the court system or amend the Federal Tort Claims Act through Congress have failed.

Those who defend the Feres ruling raise concerns that opening up litigation rights will drain the U.S. Treasury, said Eugene R. Fidell who teaches military law at Yale Law School. As of September, the number of permanently assigned active duty, national guard and reserve personnel was close to 2.17 million, according to the Defense Manpower Data Center.

There’s also a concern that litigation could hurt discipline within a military unit. Defenders also note that active duty service members can seek compensation through disability pay and other means, said Stirling.

None of these arguments sit well with attorney Khawam, who in summer 2018 first encountered Army Sgt. 1st Class Richard Stayskal.

In May 2017, Stayskal, a Green Beret, based at Fort Bragg, N.C., went to the emergency room at the Womack Army Medical Center with chest pain, wheezing and dizziness. His doctors reviewed an earlier scan taken at the center and said they thought they saw something, Stayskal said. Yet they sent him home with a diagnosis of atypical pneumonia and a referral to a pulmonologist.

His symptoms got worse, and at one point he passed out and woke up in the emergency room. Stayskal sought another medical appointment off base. He got scans and biopsies. That’s where he learned he had stage 3A lung cancer.

“It was a complete shock,” Stayskal said. His military doctors had never mentioned cancer. He was even cleared for dive school earlier that year.

Frustrated that the cancer wasn’t caught sooner, and eager to hold someone accountable, Stayskal and his wife called dozens of lawyers. He kept hearing “no” and dial tones. He was, after all, active duty.

Then his mother reached out to Khawam.

The story upset Khawam. She knew Stayskal didn’t have a lot of time and he couldn’t afford to spend it on legal proceedings. So after discussing it with Stayskal, she drafted a bill.

Soon, Stayskal was making the 6 hour drive to Washington, D.C., again and again, to meet with members of Congress.

The plan was to pass the Sgt. 1st Class Richard Stayskal Military Medical Accountability Act of 2019 as part of the mammoth National Defense Authorization Act. Khawam knew Congress would have to pass the defense budget.

As Stayskal’s story made national headlines, Jessica Purcell followed developments at her home in St. Petersburg.

Purcell suspects medical personnel first steered her wrong in 2017 when she was told at MacDill’s 6th Medical Group clinic not to worry about the lymph node in her underarm.

In August 2018, she underwent a scan at MacDill, this time for a lump that formed in her breast. She recalled being told then that the lymph node looked resolved. But days later, during a biopsy and scan at a private doctor’s office she learned that the mass in her underarm had grown.

“How within days are there two different results,” she wondered.

“Every claim, including claims from service members, undergo a thorough peer review and appropriate actions are taken when necessary, to ensure patient safety, which is paramount,” the statement said.

Purcell knew a bit about the Feres doctrine, and was frustrated that she had no legal recourse.

“You’re taking all the accountability out and it’s completely unfair,” she said.

When her brother shared Stayskal’s story with her she had some hope. She contacted Khawam, who now represents her. She cheered on the attorney’s efforts during the Washington meetings. But with talk of impeachment proceedings, and the nation’s capital so politically divided, she worried about whether the defense budget would even be adopted.

Then, on Dec. 20, the budget and the provision were signed into law.

Though the Feres doctrine remains unchanged, active duty personnel can now file medical malpractice claims with the Department of Defense. The department must create rules for adjudicating the claims.

Claims are limited to personal injury or death caused by medical malpractice by a Department of Defense health care provider and must be filed within two years of the procedure, or within three years if filed in 2020.

Legal experts see this as a good step forward for people like Stayskal and Purcell, but they worry about other cases that remain blocked by the doctrine.

For instance, Stayskal and Purcell still can’t appeal their claims in federal court and the Department of Defense will oversee what compensation they may get. Advocates also fear that this new provision will essentially put a stop to congressional or judicial efforts to tackle the doctrine.

In a statement to the Tampa Bay Times, the Department of Defense said it was prepared to receive claims Jan. 1 under existing claims procedures.

Today, Stayskal, 38, receives treatment at Tampa’s Moffitt Cancer Center. He works at Fort Bragg in an administrative position at the sniper course. His cancer is stage 4 and is terminal, but he tries to focus on raising his young family.

Purcell, now 37, splits her treatment between Moffitt and the Dana-Farber Cancer Institute in Boston.

She’s on medical leave from work at U.S. Central Command and U.S. Special Operations Command at MacDill. She keeps busy raising her 2-year-old daughter and her 10-month-old son. Her cancer has progressed to stage 4, spreading throughout her body. She’s on chemo pills and will remain in treatment for the rest of her life.

“My kids will never know me without cancer,” she said.

When she approached Khawam about filing her claim, she did it to add her name in the fight against Feres and for her family — not for the compensation, but for some accountability, some closure.

As a member of the military, she said, she expected to receive quality medical care and the same equal standards as everyone else, at least.

“We put our lives on the line.”