Elon Musk’s rocket company sent a Falcon 9 rocket carrying 60 Starlink satellites to space from Cape Canaveral Air Force Station’s launch complex 40 at about 9:06 a.m. Wednesday. The mission was number 4 for Starlink, which began launching satellites in May 2019 in batches of 60. 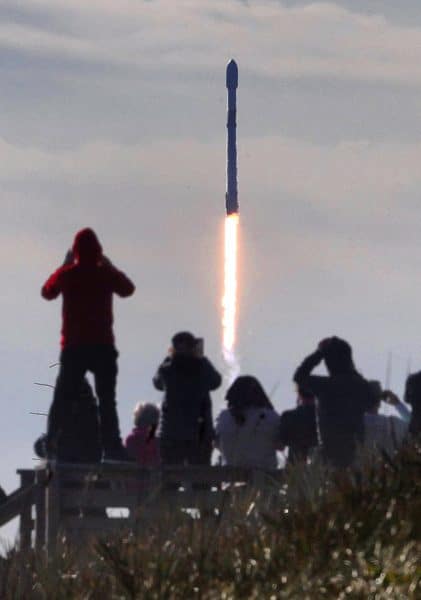 It’s the second Starlink launch this month — SpaceX is moving fast in the hopes of having more than 1,500 satellites in space by the end of 2020, allowing it to provide high-speed broadband internet connectivity to North America and Canada.

About eight minutes after take off, the company also landed its rocket booster on drone ship “Of Course I Still Love You” in the Atlantic Ocean, a goal it’s been chasing for two weeks as bad weather in the recovery area has led SpaceX to reschedule its mission multiple times. Reusability is a key part of SpaceX’s business model as it works toward repurposing more and more of its rocket components.

To that end, the company’s two recovery vessels, Ms. Tree and Ms. Chief, attempted to also catch the clam-like halves of the rocket fairing — the nose of the rocket that carries the satellites during liftoff — when they fell back to Earth 45 minutes after launch. Ms. Tree was successful, but the other fairing half landed in the water, SpaceX said. The company still plans on trying to recover and reuse the piece.

The Starlinks are part of a growing sector of private space that is focused on building telecommunications constellations for low-Earth orbit. Unlike more traditional geostationary satellites, Starlinks orbit much closer to Earth at about 550 kilometers of 340 miles.

You are now following this newsletter. See all newsletters.

Their proximity means they offer more reliable internet connections, but it also comes with a side effect: There have to be tens of thousands of them in orbit to connect the globe. SpaceX’s mission is to provide connectivity to regions that previously didn’t have it, or where it was unreliable or too expensive.

The scale of the Starlink constellation — SpaceX has already been approved to launch 12,000 — has brought it to the attention of astronomers who have spotted the satellites streaking across the night sky. Their brightness is impacting data collection, though, and the American Astronomical Society has been working with SpaceX to test a potential solution.

The prior Starlink launch, in early January, carried a darkened satellite with an experimental coating. But until the satellite reaches its operational altitude of 550 kilometers (the spacecraft are launched to 290 kilometers at first) in late February, astronomers won’t know if the coating worked.

In the meantime, SpaceX is moving ahead with Starlink launches. The Federal Communications Commission also recently approved the company to operate its satellites across 72 lanes around the Earth, instead of 24. SpaceX argued the change could allow it to serve the United States sooner and during hurricane season, from June 1 to Nov. 30.