While digging through boxes in South Pasadena, California, Jan MacMichael was surprised to find more than 100-year-old military services papers from a woman whose name she did not recognize.

The papers documented the journey of World War I Army nurse Clara Olson, who enlisted in Kalamazoo in 1917.

MacMichael found the documents while sorting through the belongings of her partner’s parents, she said. When the name didn’t ring a bell with any family members, MacMichael decided to contact the Kalamazoo Gazette newsroom to seek help finding Clara’s family. 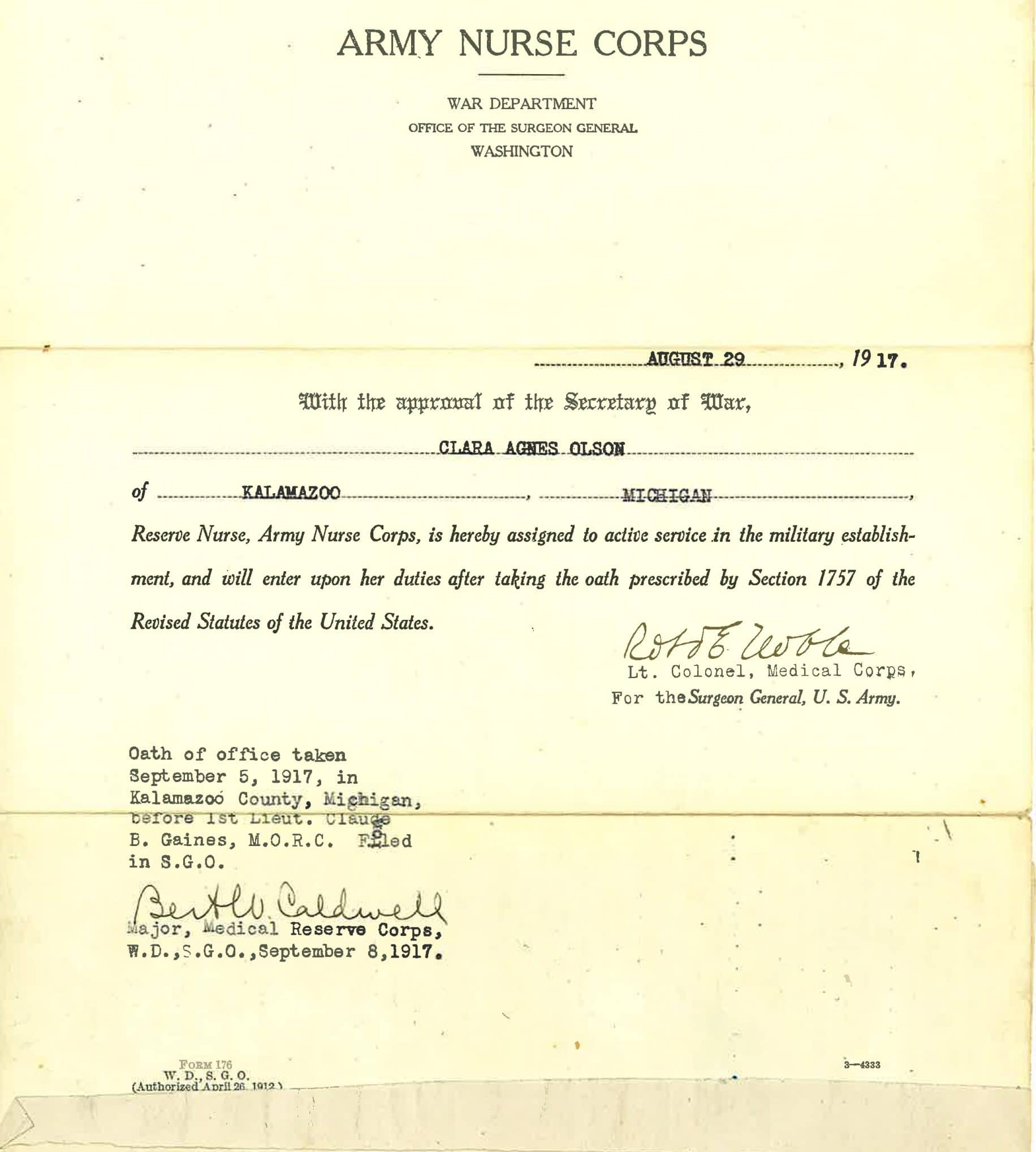 MacMichael said she came from a family of veterans, and her mother’s World War II service papers was a cherished physical piece of their family history. She was hoping to do the same for Olson’s family, she said.

“That paper is over 100 years old,” she said. “If it’s survived this long, well, I didn’t want to throw it away. I thought that would be a disservice to whoever originally kept it.”

To begin their detective work, Houghton and Carlson tapped into resources like newspaper clippings, city directories, federal censuses and yearbooks from their archives. 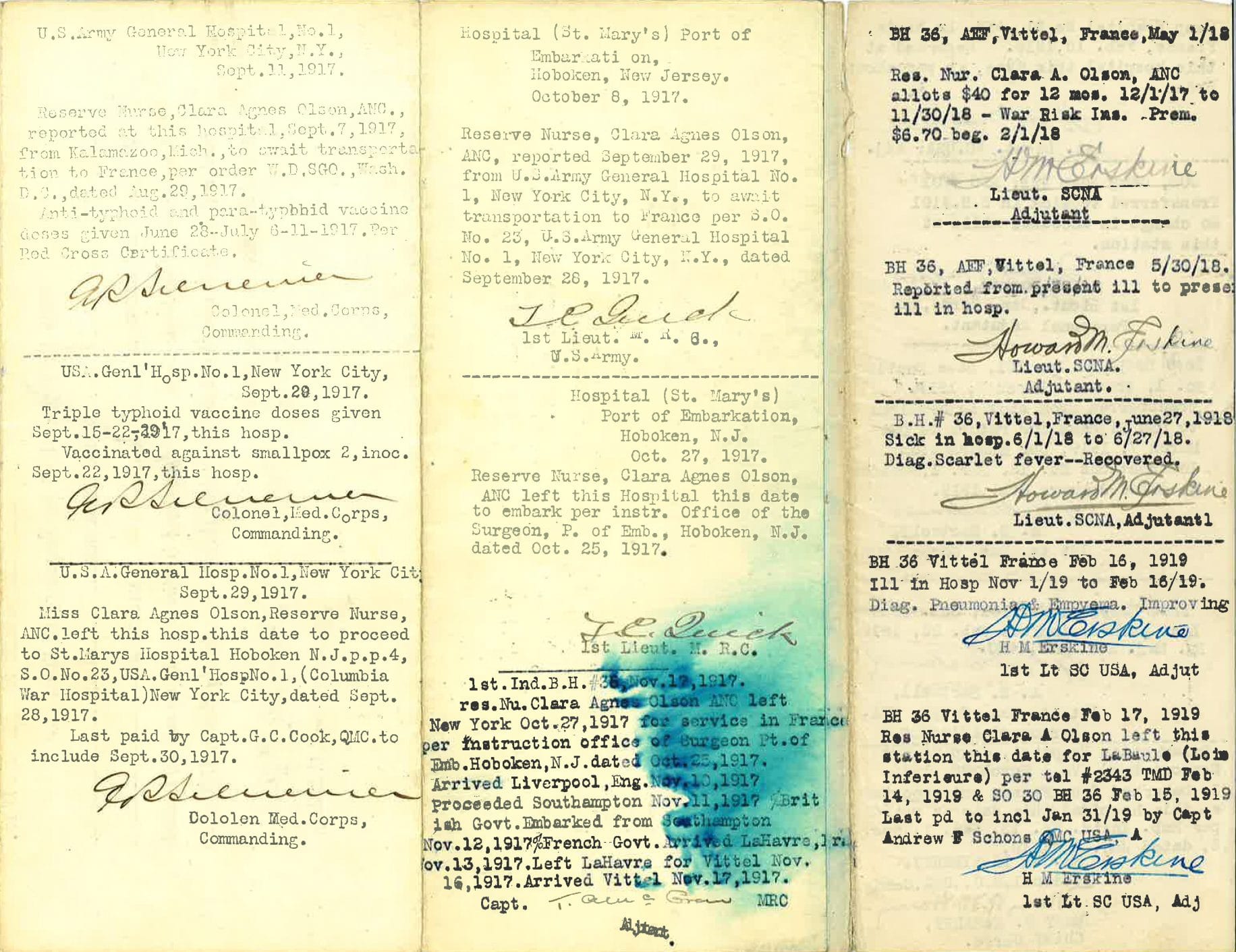 Finding the correct Olson was challenging because of her common first and last names, they said. Instead, they had to rely on finding a common thread through her ancestors with Norwegian and Swedish last names.

Even so, their search resulted in many, many Olsons or Olsens with Norwegian or Swedish heritage who lived in the Midwest, Houghton said.

The nurse’s middle name didn’t help narrow it down much, as two Clara Agnes Olsons turned up during their search. Both were born in the mid-1880s and both had a father named Andrew. 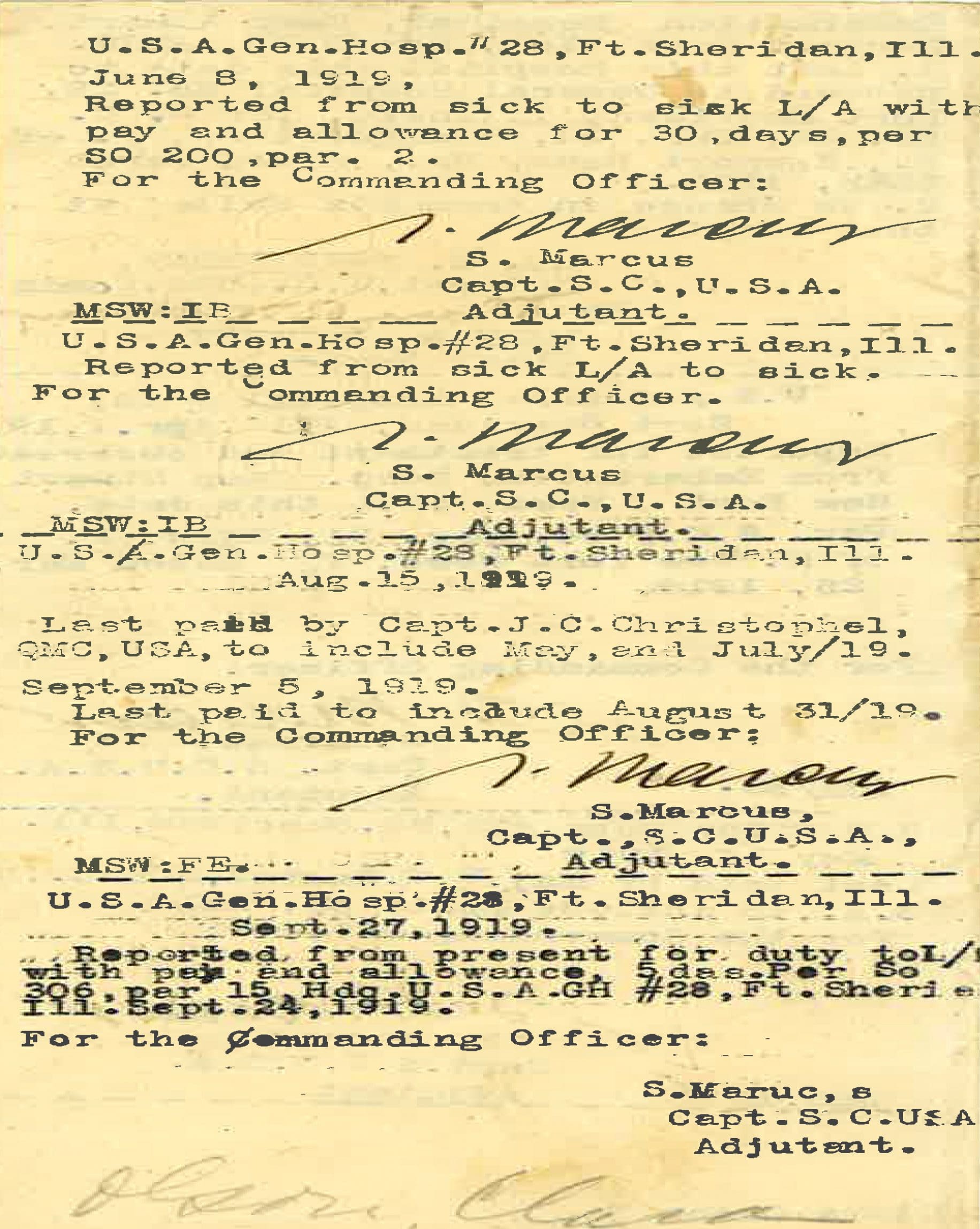 “Sometimes you do hit a brick wall,” Houghton said.

What finally differentiated the two Olsons was an “Honor Roll of Kalamazoo County” found on the shelves at the WMU Archives. The historical yearbook listed Kalamazoo residents who went off to war, and included head shots of each person and basic information about their military service.

Olson was born in 1892 and grew up in a farm family in Northfield, Wisconsin. 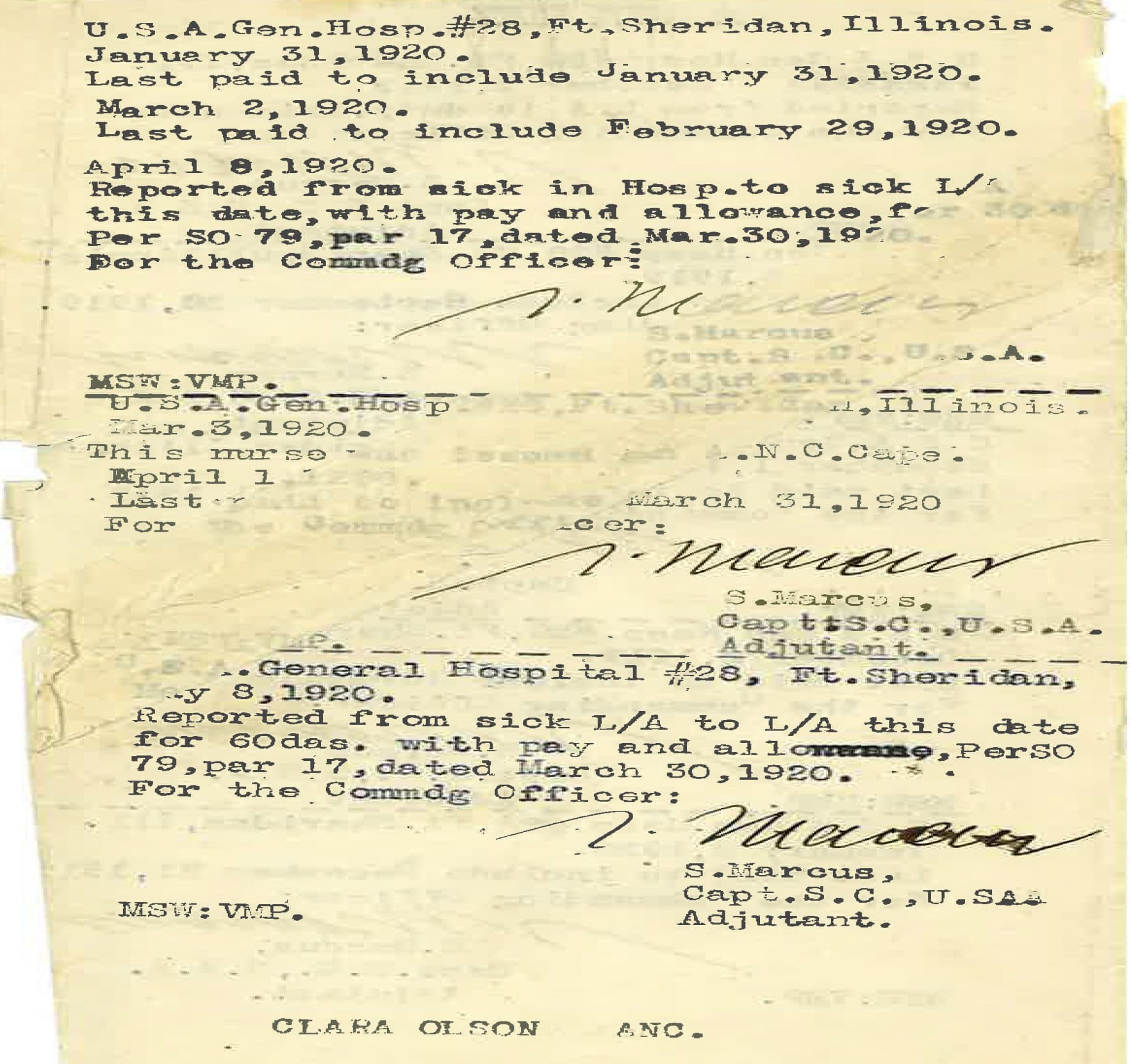 Based on city directories, Houghton and Carlson reasoned Olson arrived in Kalamazoo in 1913 to pursue a degree at the Bronson Methodist Hospital’s School of Nursing.

Olson, class of 1916, was one of the charter members of the Bronson Hospital Alumnae Association, according to the book “Bronson Women and the School of Nursing: Journeys Through 100 Years.”

In June 1916, Olson is named in a Kalamazoo Gazette article about seven applicants vying for the job of public inspection nurse. Olson was runner-up for the job.

Her military service began on Sept. 5, 1917, at a Detroit base. Then, Olson was sent to Columbia War Hospital in New York before being transferred to St. Mary’s Hospital in Hoboken, New Jersey, according to the Honor Roll book.

Olson was stationed overseas in Vittel, France, for two years.

While serving abroad at base hospital No. 36, the Kalamazoo Gazette published a short piece, “Reveille tells Army Life Abroad,” written by base doctors and nurses with Kalamazoo ties.

In 1918, Olson spent the end of May and much of June ill with scarlet fever, according to her paperwork. The rest of her time serving in France is marked with more illness, this time pneumonia and empyema, before she returned to the United States on March 7, 1919. That month, according to the paperwork, Olson arrived at a Newport News, Virginia, hospital and then transferred to a Ft. Sheridan, Illinois, hospital — but as a patient rather than a nurse.

On July 30, 1920, Olson returned to Kalamazoo to await relief from active service. Based on the documents, it is unclear if Olson was still on active duty from April to July of 1920, Houghton said.

Neither the 1920 census nor the Kalamazoo city directory from that time showed any record of Olson.

The next time Olson appeared in public records was after she moved to California and was married. She and her husband, Charles Carbinier, appeared in 1924 voter registration records in Los Angeles.

Both graduated from dental school at the University of Southern California in the two years following. They were practicing dentists in the early 1940s, until Carbinier entered active duty in World War II, serving as a lieutenant commander in the Navy’s Dental Corps starting in November 1943.

In January 1945, Carbinier died from a heart attack at the San Francisco Naval Base. Olson remarried four years later, and was widowed again in 1951. She never had children.

Olson stayed in the Los Angeles area and lived to the age of 83.

She was buried alongside her first husband in Forest Lawn Cemetery. The Hollywood Hills cemetery overlooks Universal Studios and is also the final resting place for stars including Lucille Ball, Michael Jackson, Debbie Reynolds and Carrie Fisher.

Houghton and Carlson could not find any living relatives connected to Olson. A Los Angeles Times obituary said she was survived by in-laws and many nieces and nephews.

The Kalamazoo Gazette contacted MacMichael to share the news that Olson had lived, worked and died in Southern California.

Once MacMichael heard Olson’s married name it finally clicked. The Carbiniers were close friends of her partner’s family. Both couples had attended USC dentistry school.

“I just had no way to connect the dots,” MacMichael said.

For those interested in finding the missing link in their own genealogy, Houghton and Carlson recommend starting with easily accessible resources through Google Books or Ancestry.com.

“I think Ancestry is a good portal,” Houghton said. “They may open a door for you and then there might be other places for you to go, too.”

If someone is looking to dig deeper and pull tax data or a fire insurance map, both of which were used during the search for Olson, then they can find guidance at the WMU Archives.

Houghton and Carlson said they are happy to help, but suggest calling ahead and bringing any relevant documents to help direct the search.

“It is like a puzzle, it’s kind of fun,” Carlson said. “Some people do crossword puzzles other people do other people’s genealogy.”