He was dressed in a private’s uniform in an apparent low-key effort to see a few of his men who were recuperating at Walter Reed General Hospital in Washington, D.C., after the raid.

“I was a nurse assigned to some of his men in the officers’ ward and Gen. Doolittle was checking on them,” Boote said during a phone interview Dec. 17. “I thought he was a buck private and I was going to escort him out because he had no business in the officers’ ward.” 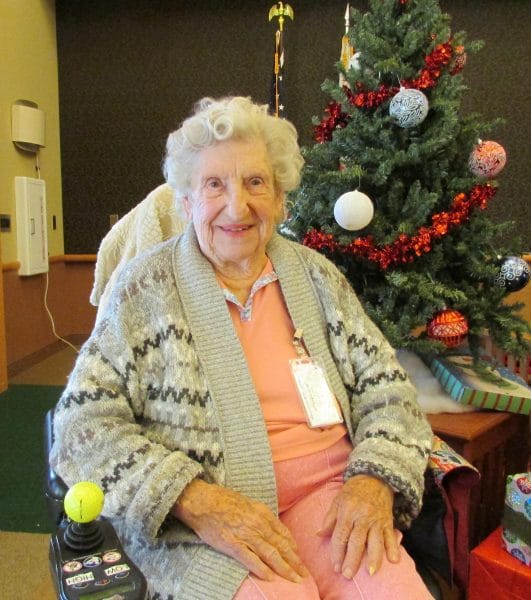 Jane Boote, an Erie native, will turn 100 on Christmas Day. She is pictured during a Christmas party Wednesday at the California Veterans Home in Fresno, California. [Erie Times-News/TNS]

The memories, now more than 75 years old, come as clearly to Boote as if they had happened just a few weeks ago.

Born in Erie on Christmas Day, 1919, Boote will celebrate her 100th birthday Wednesday at the California Veterans Home in Fresno. Family members will visit her for a celebration.

“My one daughter is baking a cake,” Boote said. “I’m waiting to see if she is going to put on 100 candles. If she does, I’ll try to blow them all out.”

Boote, then known as Jane Kissinger, lived on Erie’s eastside near Wesleyville with her parents — Jenny and Joseph Kissinger. She was the youngest of five children.

Her family, like many others, struggled during the Great Depression.

“Her dad worked for General Electric and they were really merciful during the depression, mom would always say,'” said Laraine Carlson, one of Boote’s two daughters. “They reduced everyone’s hours, but they never laid them off.”

Boote left Erie in 1938 to attend nursing school at Allegheny General Hospital in Pittsburgh. Being a nurse was the only job Boote said she ever wanted to have.

By the time she graduated in early 1941, military officials were “waiting at the door” to recruit the new nurses.

Boote signed up with the Army and was eventually transferred to Walter Reed. She helped care for several of Doolittle’s Raiders who were injured in the legendary raid, including Ted Dawson, who later wrote the book “Thirty Seconds Over Tokyo.”

She ended up seeing Doolittle quite often as he continued to follow the medical care of his men.

“Gen. Doolittle was a honey,” Boote said. “He was very kind and attentive to people. He came to see his men at all hours of the day and night.”

Frustrated with stateside duty during the war, Boote volunteered to go overseas.

She was sent to Iceland and later worked in a mobile hospital caring for members of Gen. George Patton’s Third Army as it raced across France and Germany after the Normandy invasion in 1944.

“The only problem was that Gen. Patton had his men going so fast that we couldn’t keep up with them,” Boote said.

After the war, Boote relocated to the western United States and worked as a nurse at several VA hospitals before retiring in 1984.

She joined the Sweet Adelines, an international organization of women who sing barbershop harmonies, and traveled around the western United States for competitions.

“She sang with them for 30-some years and even got me involved,” Carlson said. “It’s near and dear to her heart.”

Having a birthday on Christmas was “terrible” because it would be neglected amid all the holiday celebrating, Boote said.

“But when you’re young, you don’t know the difference,” Boote said.

Carlson said she always buys her mom a birthday gift and a Christmas gift.

“But I don’t remember any birthday cakes on Christmas,” Carlson said.

As Boote prepared to turn 100, she said she didn’t have any special advice for those looking to live a long, healthy life.

“I just keep breathing,” she said.