The interdictions were made between mid-October and early December by the joint efforts of the following five separate Coast Guard cutter crews:

“This offload demonstrates another successful example of the ‘Cycle of Justice,’ said Vice Adm. Linda L. Fagan, Coast Guard Pacific Area commander. “This cycle begins with intelligence-driven detection and monitoring of illicit activities that then cue the interdiction and apprehension of smugglers and contraband, and ultimately leads to criminal prosecution. This ‘Cycle of Justice’ disrupts a ‘Cycle of Crime,’ which left unchecked, fuels violence and instability that corrodes our Hemisphere’s social and economic fabric, and directly contributes to historically high drug-related deaths in neighborhoods across North America.”

Also in attendance for the offload was Preston Grubbs, the Principal Deputy Administrator of the Drug Enforcement Administration, and Robert Brewer, the U.S. Attorney for the Southern District of California. 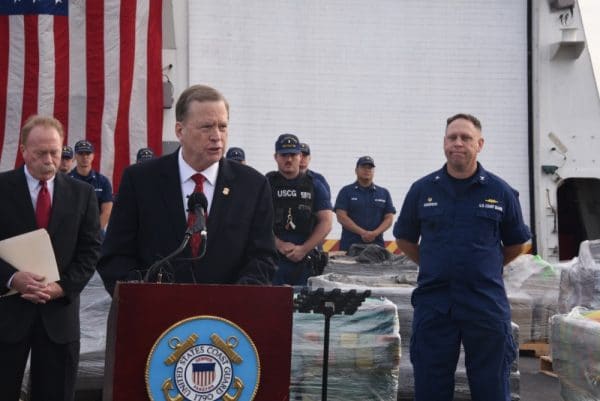 The honorable Robert Brewer, Southern District of California United States Attorney, speaks on the Coast Guard Cutter Bertholf’s crew during a drug offload of more than 18,000 pounds of cocaine in San Diego, Dec. 18, 2019. The $312 million-worth of seized cocaine was the result of seven separate suspected drug smuggling vessel interdictions and disruptions by Bertholf and four other Coast Guard cutter crews who patrolled international waters of the Eastern Pacific Ocean off the coasts of Mexico, Central and South America between October and November. (U.S. Coast Guard photo by Petty Officer 3rd Class Alexander Gray)

“One of our key missions is stopping dangerous drugs before they reach our shores,” said Brewer.  “Succeeding in that mission would not be possible without the tireless efforts of the United States Coast Guard.”

Numerous U.S. agencies from the Departments of Defense, Justice and Homeland Security cooperated in the effort to combat transnational organized crime. The Coast Guard, Navy, Customs and Border Protection, FBI, Drug Enforcement Administration, and Immigration and Customs Enforcement, along with allied and international partner agencies, play a role in counter-drug operations. The fight against drug cartels in the Eastern Pacific requires unity of effort in all phases from detection, monitoring and interdictions, to criminal prosecutions by U.S. Attorneys in districts across the nation.

“I am deeply proud of the work the men and women of the Bertholf have accomplished,” said Fagan. “I look at theirs as lifesaving work, and while we may never know how many lives were saved here today, this crew and all the crews involved in these interdictions should be proud of what they’ve achieved.”

This press release was originally published by the U.S. Coast Guard.

Iran’s Rohani urges Muslim countries to fight against US 'hegemony'