As UCF research associate Shane Reynolds guides his avatar over a virtual minefield using his iPad, small beeps and whistles reveal the location of the scourge of the modern war zone: Improvised Explosive Devices, or IEDs.

He must take his time to sweep every last inch of the playing field to make sure his character doesn’t miss any of the often-deadly bombs.

Despite his slow pace, Reynolds makes a small misstep and with a kaboom! a bomb blows up his player, graphically scattering body parts. 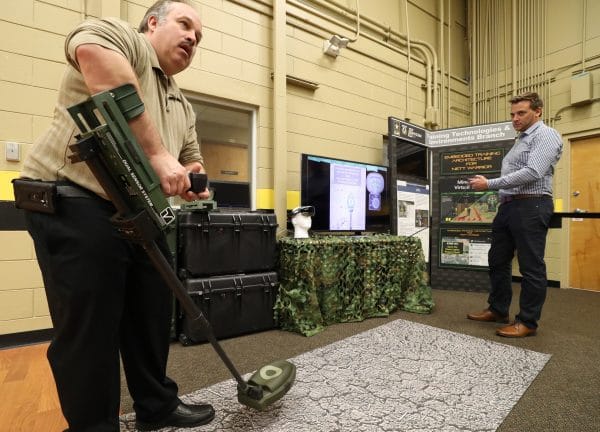 The device is much more than a game. It’s meant to train soldiers to find IEDs in the field to keep their comrades from injury or death.

In Iraq and Afghanistan, 45 percent of the 4,536 U.S. military deaths so far came because of an IED, according to the Congress’ public policy research institute.

“To teach the soldiers how to use it for their daily tasks … and making it fun for them to use really helps them to learn through practice,” said Latika Eifert, science and technology manager at the Orlando Army Research Lab.

Virtual and augmented reality has become one of the fastest-growing methods of training workers in fields like maintenance, medicine and even making fried chicken. 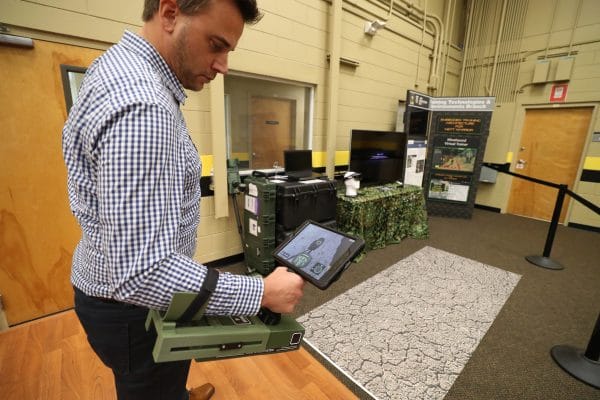 Shane Reynolds, UCF Research Associate demonstrates an AR/VR system to train soldiers and Marines on how to improve their ability to detect improvised explosive devices. (The Orlando Sentinel/TNS

The U.S. Army has been developing its IED-detection trainer for three years, with the goal being to replace $20,000, physical and bulky trainers that must be used in the field using cans or other metal objects with smaller, $500 devices that can be used virtually.

Funding for the research project comes from a small part of a larger U.S. Army training contract.

A pilot test of 10 soldiers from Fort Benning, Ga., showed that results from those who used the virtual trainer and the physical trainer were similar. The plan now is to expand that test.

“We are really close to being able to put it in the hands of soldiers,” said Dean Reed, a UCF faculty researcher and U.S. Army veteran. “Now, it’s about having this adopted formally” by the military.

The simulator consists of an iPad program that Reynolds demonstrated to a reporter recently, along with a device that users slip on their arms that replicates the feel of an actual IED detector, along with its weight, to the ounce.

As they sweep an area, the device beeps when it senses an IED.

In the field, the soldier would then place a series of markers to reveal the device’s shape, which specially trained personnel can then identify.

Researchers believe their device will be cheaper and much more available.

“We are trying to show the utility of having this device available 24-7 and the ability to train when you want to train,” Reed said. “This enables that capability.”

At this year’s Army Expeditionary Warrior Experiments conference at Fort Benning, Ga., the research team received direct feedback from soldiers who would be using the device in the field.

That experience prompted some changes to the device and program, including making it more user-friendly for left-handed people.

Dean said it has been a constantly evolving effort to teach different generations of warriors on the virtual trainer.

“Young soldiers embrace the technology immediately where traditionalists often have to be shown on the device,” he said.

But he said it has been a mostly smooth process of teaching soldiers.

“If you can potentially save money by improving their training and reduce the cost, it’s a big win, in my opinion,” Reed said.