The U.S. Navy’s Blue Angels flew the “missing man” formation Thursday in remembrance of the victims of the Dec. 6 shooting attack at Naval Air Station Pensacola in Florida, which took the lives of three sailors on the base and saw multiple others injured. 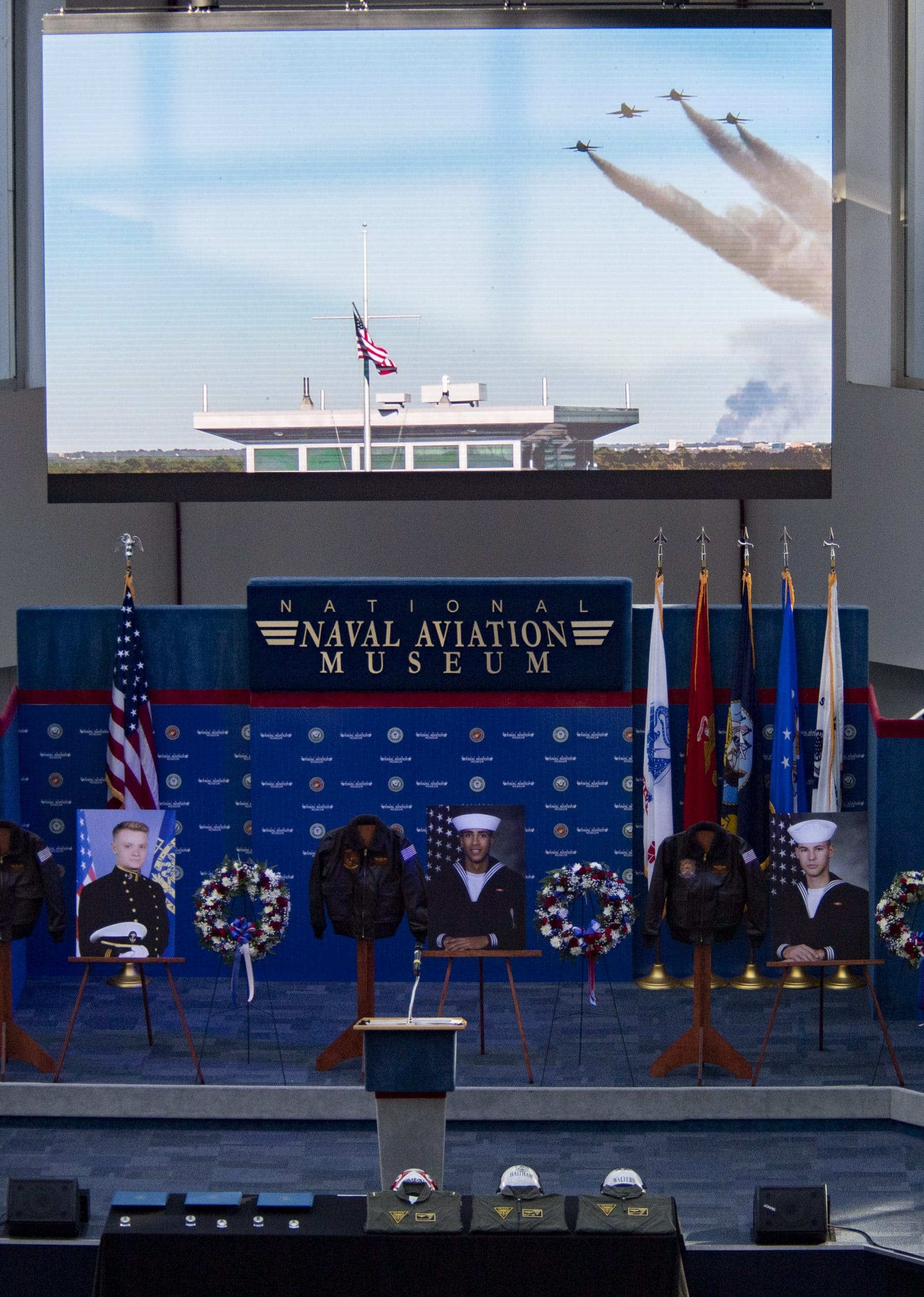 The Navy aerobatics team, which is itself based out of the Pensacola air base’s Forrest Sherman Field, announced the flyover formation on Twitter.

The Missing Man formation was flown today in honor of the fallen and the strength in our community #WeHavetheWatch
.
.
.@NASPensacola@USNavy
@NavalAviationMuseum pic.twitter.com/YeUTTTHDTC

“We can never know what will be demanded of us on any given day, and no one could have foreseen what would be demanded on December 6th, but these men answered the call,” said Adm. Chris Grady, who presided over the ceremony. “Through their heroic acts, they saved lives by sacrificing their own and for that, we are forever grateful.”

The acting Secretary of the Navy Thomas B. Modly previously posthumously awarded the three sailors with the Wings of Gold, symbolically recognizing the flight students whose goals included becoming naval aviators. Modly recognized the sailors for sacrificing themselves to protect others and stop the shooting attack.

The sailors and Marines on the base previously lined up throughout the base to salute the Watson’s parents.

Watson reportedly tried to disarm the shooter, but was suffered five gunshot wounds in the process. Despite his wounds, he managed to crawl outside the building where the attack occurred and gave first responders vital information about the location of the shooter before he died.

The Dec. 6 shooting attack was reportedly carried out by Saudi 2nd Lt. Mohammed Alshamrani, a Saudi national aviation student in the U.S. to undergo flight training under U.S. Navy instruction.

The FBI is reportedly treating the investigation of the attack as a possible terrorism case amid claims Alshamrani expressed anti-Israel sentiments and quoted deceased al Qaeda leader Osama Bin Laden. He also reportedly viewed videos of other mass shooting prior to the attack.

Six other Saudi nationals have also been questioned in relation to the attack and the Pentagon has suspended training for all 852 Saudi Arabian military members brought into the U.S. as part of the training program, including 140 other students at Pensacola Naval Air Station, 35 at Whiting Field, and 128 at Naval Air Station Mayport in Florida.