“The significance of this jump is that I am passing the torch off to my son, who is going to go to the 82nd Airborne Division, which is where I started at — and his jump career is going to begin where mine ends after 31 years,” said Command Sgt. Maj. Sanchez. “It’s a proud moment, and it is bittersweet. It is bittersweet, but it is time for me to stop jumping and let these younger kids jump.” 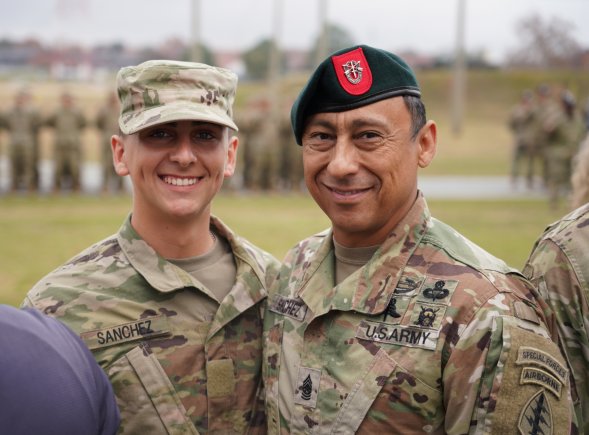 Command Sgt. Maj. Sanchez will be retiring from the Army at the beginning of the new year. Many accomplishments and accolades have marked his illustrious career, but being able to jump with his son is a feat worth ending on.

“Someone asked me, “Why don’t you keep going?” said Command Sgt. Maj. Sanchez. “I like to go out on top, and I think where I am at in my career right now, being a group sergeant major, to me that is on top. Leaving the Army and being able to jump with my son, is probably one of those things you can’t replicate, you can’t top it, so I feel good about getting out at this point of my career and seeing him just start his career, it’s just a good feeling.”

Pvt. Sanchez will be going to the 82nd Airborne Division in Fort Bragg, in N.C. after his completion of hometown recruiting, in northwest Fla.

The sentiment and importance of being able to jump with his father will not be lost on the young Soldier.

“So many people will never have this opportunity in their life, its once in a lifetime, so having him come and do this now is great,” said Pvt. Sanchez. “I am very thankful that he was able to come and jump with me at the beginning, because, it is in final jump of his career, so it is a big milestone for him, and it was amazing to be able to be there with him and watch him jump one last time.” 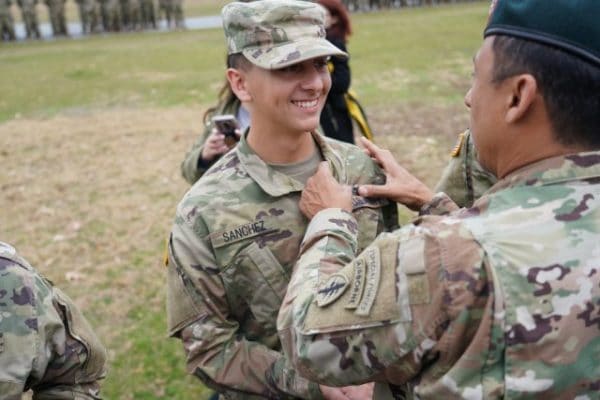 “I felt awesome, knowing that was his last one and the beginning of my jump career, and just watching him and sitting next to him on the plane and watching him jump out of the door was awesome,” said Pvt. Sanchez.

Command Sgt. Maj. Sanchez was also in attendance for the graduation ceremony and pinned the Basic Parachutist Badge [wings] on Pvt. Sanchez, but still knew the nostalgia of being able to jump with his son, was unforgettable.

“To me being in the actual aircraft, which probably a little higher risk than actually pinning his wings on, it was a little more nostalgic for me,” said Command Sgt. Maj. Sanchez. “Just seeing him all kitted up, next to me on the bird with the door open and the wind blowing in our face, you know it was just one of those events that you go through once in a lifetime. So, I think that would be a little more prioritized. Pinning the wings on is a little more of the symbolic or ceremonial thing, which is good, but having that experience up in the aircraft is not ever going to happen for a lot of people.

“Still, it was an experience that I won’t forget.”

This press release was originally published by the U.S. Army