Firearm manufacturer Sig Sauer has produced a civilian version of the new M17 and M18 pistols being fielded by the U.S. military.

Sig Sauer’s civilian P320-M18 is configured “nearly identically to the U.S. military’s models,” according to press statement by the gun manufacturer. Sig Sauer announced the new civilian firearm Tuesday and is handgun is now available.

SIG SAUER is proud to introduce the long-awaited P320-M18, the civilian version of the US Military’s M18, the official sidearm of the U.S. Marine Corps. Click https://t.co/duIyVDUqMW for more information and to find a dealer! #M18 #P320M18 #MHS #SIG #SIGSAUER #NeverSettle pic.twitter.com/PdNWZsTZmA

“Since the official selection of the M17 and M18 by the U.S. Army for the Modular Handgun System (MHS), we’ve seen significant civilian interest to own both variants of the handguns,” said Sig Sauer’s Executive Vice President of Commercial Sales, Tom Taylor. “The P320-based M17 and M18 are among the most tested handguns in history and the pair has been proven to be unmatched in both accuracy and reliability.”

According to a June Sig Sauer press statement, the Army, Navy, Air Force, and Coast Guard have already adopted the MHS firearm models while the Marines have cleared the firearm for use. The Marines are set to begin their acquisition of the military firearms in 2020.

“We are very proud that with the P320-M18, civilians can now own the same innovation and versatility that has made either the M17 and M18 the handgun of choice for all branches of the U.S. Military,” Taylor said.

The 9mm striker-fired handguns will reportedly ship with one 17-round magazine and two 21-round magazines. The pistols will also feature an “M18-XXXXXX” serial number.

The civilian M18 models will feature a SIGLITE front night sight and a removable night sight rear plate “as specified by the MHS contract,” lending further comparison to between the military and civilian handgun models.

The handgun comes with features black controls, a carry-length coyote-tan grip module and a coyote PVD finished slide. The handgun also has an ambidextrous manual safety. 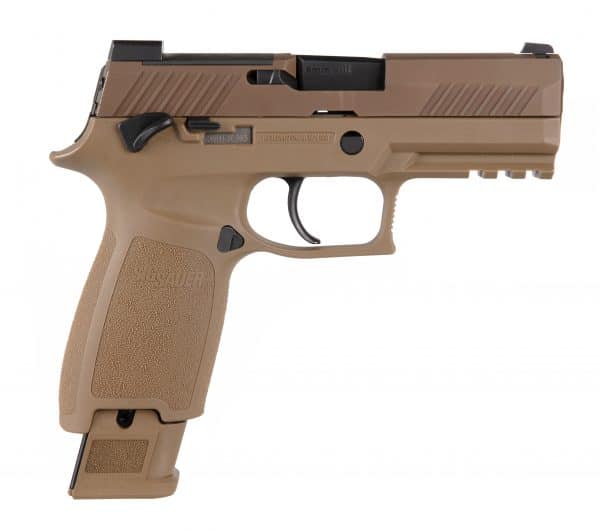 Sig Sauer is also preparing state-compliant versions of the firearm for states with laws that would render the firearm illegal. The compliant version is already listed on the Massachusetts handgun roster, according to the manufacturer’s press statement.