When a soldier dies in battle, the family needs special healing.

A mother who lost her son in 2005 on a Middle East battlefield offered memory boxes last week at First Congregational Church of Tallmadge to two families who lost young men in the Vietnam War.

Edie Deyarmin of the Deyarmin Foundation presented the memory boxes. She is the mother of Marine Lance Cpl. Daniel Nathan Deyarmin Jr., a 2002 Tallmadge High School graduate who was killed Aug. 1, 2005, in Haditha, Iraq, while serving his country. 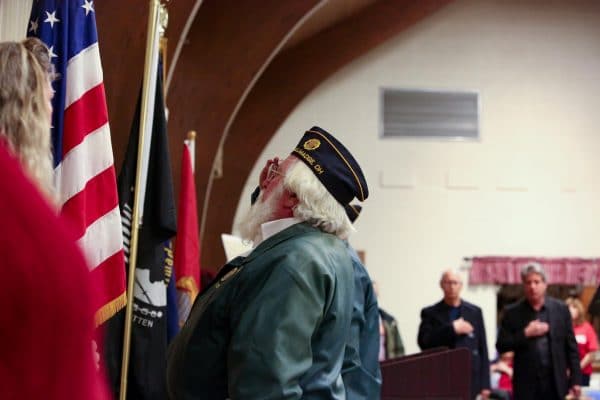 The families of Marine Lance Cpl. William H. Bator and U.S. Army Cpl. Richard Morgan were honored with memorial boxes and a healing Warriors Journey Home ceremony. Those present recognized 22 veterans who attended and were led by the oldest combat veteran as they entered the healing circle created by family and friends. Each answered the roll call with no response from Bator and Morgan, the two lost in war.

Also in attendance were the Tallmadge American Legion 255 led by Commander Jim Forsythe and Vietnam Veterans of America led by Jim Oaks.

“We share a title ‘Gold Star Family’ member,” Deyarmin said. “Their families suffered a loss as mine but the support at the time was not as strong or ongoing over the years. I cannot imagine going through the loss of my son without the comfort of my community, family and friends.” 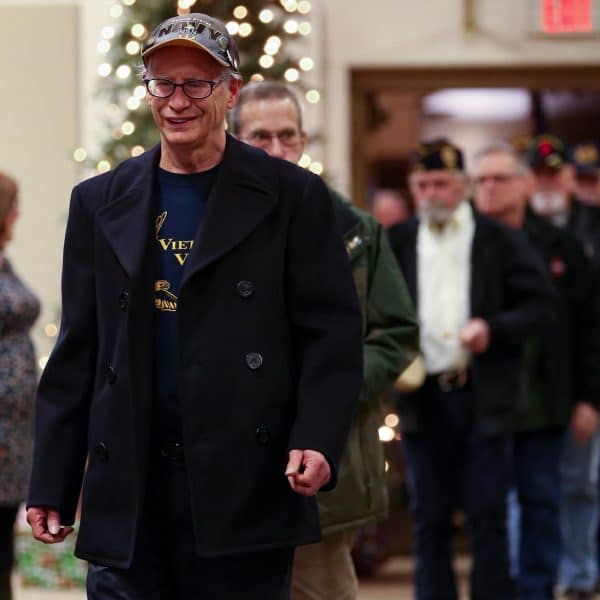 During the Dec. 16 healing ceremony, 22 veterans march into a circle formed by family and friends. (Ian Perez/For The Tallmadge Express/TNS)

Deyarmin said she found the Memorial Box Project on Facebook and the Deyarmin Foundation sponsored the two boxes for Vietnam veterans which were ordered in May and arrived, appropriately, on Veterans Day.

Deyarmin said JayAnn Morgan Brooks and Lori McGivern Thompson supported her when she lost her son.

“JayAnn sent notes of encouragement,” Deyarmin said. “I had to be strong and go forward. Lori headed up the raffles prize table and helped out. Their friendship and dedication meant the world to me. They lost their brothers. They lost just as I did without the support I had.” 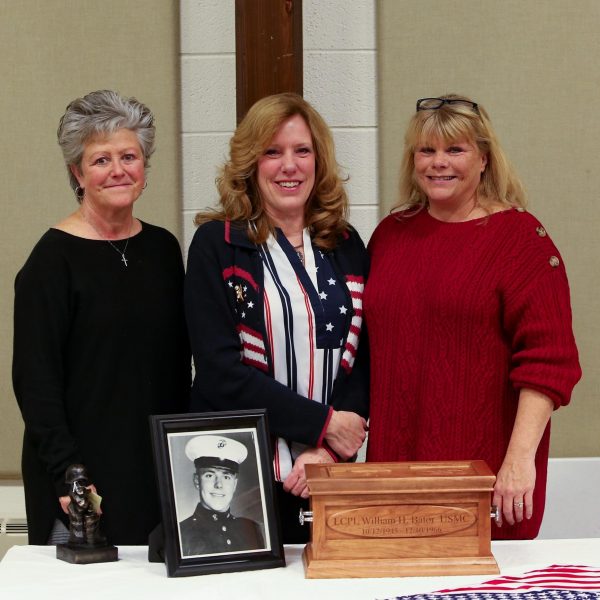 Lance Cpl. William H. Bator was born Oct. 12, 1945, and enlisted in the Marines in 1965. On Dec. 9, 1966, he was on a four-day patrol in the Quang Tri Province of South Vietnam and ambushed. The troops evacuated the wounded and were crossing a river Dec. 10 when two U.S. F14 Phantom planes dropped bombs and killed 17 men by friendly fire, including Bator.

His younger sisters, Lori McGivern Thompson of Tallmadge and Tammie McGivern of Medina, were present for the ceremony.

“It helps bring closure,” McGivern said. “We didn’t have the same experience as Edie but people showed up for healing.”

U.S. Army Cpl. Richard Morgan was killed April 7, 1971, in Quang Tin Province. He was recognized July 3, 2010, with a ceremony at the Vietnam Veteran Memorial in Clinton and Sept. 19, 2010, at the Clocktower in Cuyahoga Falls, his hometown.

Morgan’s six sisters, including Brooks, were present for the presentation. Brooks of Tallmadge was invited to the ceremony on the pretense she would be serving cake.

“I was totally surprised,” Brooks said. “It was an amazing ceremony. Edie is such an inspiration to Gold Star mothers, sisters and brothers. She’s so giving.”

“We remember our brother as a hero,” Konic said. “I was 9 and I remember when they came to the house. I knew something was wrong.”

Mary Jo Goldman of Silver Lake said the controversy of the Vietnam War made it difficult for closure.

John Schluep of Warriors Journey Home said veterans have a difficult time returning home without connection to the community and a spirituality for healing.

In the Civil War, it was called Soldier’s Heart; in World War I, shell shock; in World War II, combat fatigue; and in 1980, it was labeled PTSD and doctors recognized they weren’t able to treat the condition with medication and traditional treatments, Schluep said.

People grow up with morals and teachings of right and wrong, he said. They go to war and commanders make decisions they must obey even though they violate their morals.

“There is guilt and shame. They feel betrayed by the chain of command,” Schleup said.

At age 100, Army veteran, the 'father of preventive medicine' is still going strong — as living proof that he was right all along