At the footstep of Germany, on Dec. 8, 1944, Gen. Patton turned to God for help — something not one of the other four American commanders in the European theater had done.

Patton, who believed he had a close and personal relationship with God his whole life, asked Chaplain James H. O’Neill if he knew of a “good prayer for the weather,” according to military historian and Patton expert Kevin M. Hymel, as reported by Los Angeles Times.

O’Neill came up with this prayer:

“Almighty and most merciful Father we humbly beseech Thee, of Thy great goodness, to restrain these immoderate rains with which we have to contend. Grant us fair weather for battle. Graciously hearken to us as soldiers who call upon Thee that armed with Thy power, we may advance from victory to victory, crush the oppression and wickedness of our enemies, and establish Thy justice among men and nations.
AMEN.”

He typed the prayer on one side of an index card. On the other was a Christmas greeting from Gen. Patton, who then ordered 250,000 copies for every man in the 3rd Army. 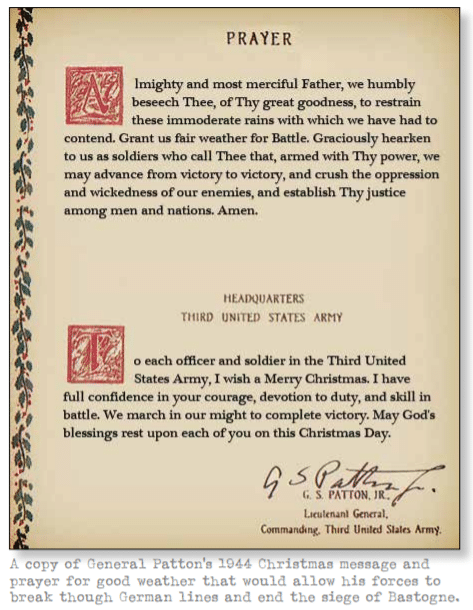 The Christmas greeting from Gen. Patton, who was the son of devout Episcopalians, said:

“To each officer and soldier in the Third United States Army I wish a Merry Christmas. I have full confidence in your courage, devotion to duty, and skill in battle. We march in our might to complete victory. May God’s blessing rest upon each of you this Christmas Day.”

Despite the uniqueness and unprecedented scale of Gen. Patton’s prayer, it was answered. The weather miraculously cleared and Patton was able to get his troops moving again just before it began to snow. On December 26, 1944, he broke through the German defenses and relieved Bastogne.

O’Neill praised Gen. Patton’s leadership and faith, saying, “He had all the traits of military leadership, fortified by genuine trust in God, intense love of country, and high faith In the American soldier. He had no use for half-measures.”

The famous miracle was so elemental in turning the tide of the battle that it was depicted in the 1970 movie “Patton,” wherein George C. Scott portrays the iconic historical figure.

Patton had a lot of success in World War II, but it was his effort at Bastogne, Hymel said, that Patton considered his “most brilliant operation and outstanding achievement of the war.”

Nonprofit makes Christmas merry for veterans: 'A lot of them wouldn't have anything'