Daytona Beach’s veterans-only homeless shelter is turning a year old and the 20-bed facility, in one of the city’s troubled neighborhoods, continues to be a refuge for those who’ve served.

By last Christmas, only a handful of veterans had settled into the new Barracks of Hope, each with his or her own room. Since then the shelter has housed 52 veterans. Of those, 29 reached the shelter’s ultimate goal, to eventually secure permanent housing.

The shelter is run by Halifax Urban Ministries, a charity helping Daytona Beach’s homeless population through sheltering, feedings and other basic services for more than 35 years.

On a typical day outside the shelter, homeless men and women pedal down North Segrave Street, riding by on their old bikes. Around the corner, along North Street, more loiter, sitting hunched over curbs. The area is a magnet for those most in need of services: the mentally ill, addicted and those with limited opportunities for work. It also invites crime. 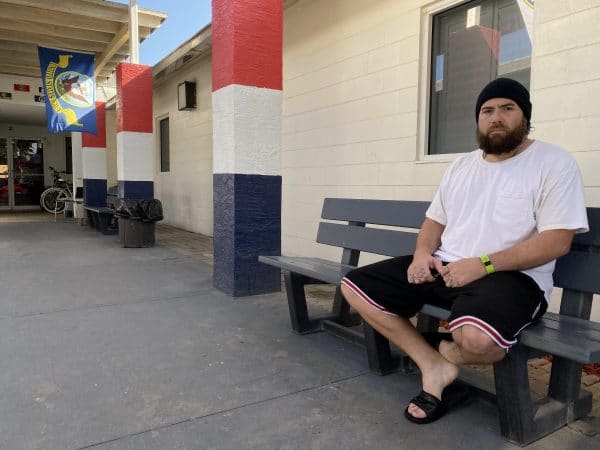 Nestor Portalatin, an Army veteran, sits outside Barracks of Hope, a Daytona Beach homeless shelter for veterans. Portalatin arrived at the shelter in October, but seeks to move into permanent housing soon. [News-Journal/Victoria Villanueva-Marquez]

For many, the shelter protects them from the potential harm that exists just a few feet away from its front doors. The streets are frequented by drug dealers and pimps, who some veterans say pose a threat to their safety.

For one Army veteran, facing the risk of death or injury has become overwhelming.

Nestor Portalatin, 40, sinks into a chair inside the shelter. He pulls off his black beanie and pushes his hair back. Tears spill from his eyes.

“I go out into the street every day,” he said. “People are always trying to fight me, man. I never get beat up or anything, but who’s to say they won’t come back with a gun and come (expletive) shoot me. … I feel hopeless, man.”

Despite the rough neighborhood, the shelter attempts to restore hope in its residents by eliminating the barriers that prevent them from securing permanent housing. While veterans can live at the shelter for up to two years, their stay lasts about four to five months on average.

Not everyone has left the shelter on good terms. Eight veterans were unsuccessfully discharged from the shelter.

Two ended up staying with friends or family.

One was admitted into a psychiatric facility.

Another was moved into an emergency shelter.

One was taken to a hospital due to illness.

And the last one died.

“Truthfully, if every story was a success story, you’d have to question, ‘Are we cherry-picking the people that we’re bringing in here?’ ” said Buck James, the executive director of Halifax Urban Ministries.

He noted that many of the veterans had previously sought help from other shelters, but were kicked out for violating certain rules.

“Historically, in veteran’s housing, it was one strike and you’re out,” he said. “If you show up and you’re intoxicated, or if you break some other rule, you’re out.”

But Barracks of Hope refrains from turning away veterans who relapse while in recovery.

“If you’re around it very long, you’ll understand that part of recovery is slipping,” James said. “Very seldom is there somebody that decides, ‘I want to change my life,’ and doesn’t ever slip up.”

The charity may consider expanding the shelter in 2021, James said, noting that the facility has the capacity to add four or five more beds.

Halifax Urban Ministries also houses children and families a few miles away at Hope Place, while feeding the hungry daily at Bridge of Hope, which is nearby Barracks of Hope.

Donna Dooley, the director of operations for Halifax Urban Ministries, said veterans who arrive at Barracks of Hope under the influence are asked to spend the night in the shelter’s “safe room,” where they can be monitored by staff. Those who decline are asked to leave their door open, instead.

“We’re trying to replace bad behaviors with good behaviors,” Dooley said. “I can’t replace a bad behavior if I say, ‘Get out.’ How many times do we have to redirect our children when they bite someone? We don’t give our kid away just because they bite another child four or five times.”

She stressed the importance of allowing veterans to correct their behavior, and pointed out that the shelter has an amnesty box, where veterans can drop off contraband without facing any repercussions.

Treating veterans with grace, she added, allows them to work toward their goal of securing permanent housing.

Portalatin relocated to Daytona Beach in October after spending years living on the streets in Orlando, where he would move from park benches to shuttered plazas to tents.

His addiction to cocaine and marijuana, among other drugs, prevented him from staying with family members in Orlando.

Although Portalatin came to Daytona seeking refuge at the shelter, he hopes to move into a place of his own through the Veterans Affairs Supportive Housing program. Veterans can move anywhere within the Orlando circuit, Dooley said, but their new residence must be inspected before they can settle in.

Portalatin, who said he is now clean, yearns to live in a better neighborhood.

But until he can leave the shelter, he focuses on remaining positive. He prays every day, and often brings food to a homeless woman he has befriended.

“She calls me her angel,” he said. “But I’m not an angel. I’m just trying to help her out because she’s down and out. I know what that’s like, man. I’ve been on the streets, too. That’s why I’m here.”