Dr. John McAuliffe throws confetti off the bridge to remember his friends who did not return from war at the Memorial Day Water Ceremony May 26 at Elm Park. [T&G File Photo/Christine Peterson]
December 16, 2019 Bill Doyle - Telegram and Gazette
Share
Tweet
Flip

Dr. John E. McAuliffe fought in the Battle of the Bulge during World War II and he was looking forward to attending the 75th anniversary of the conflict in Europe this weekend.

Unfortunately, the former Worcester dentist died on Monday at 96. The next day, 17 veterans of the battle, all in their 90s, flew from Boston to attend the 75th anniversary ceremonies in France, Luxembourg and Belgium. Marine veteran Andrew Biggio of Winthrop raised more than $60,000 online to pay for the trip, and with his health beginning to fail McAuliffe arranged months ago for Rodney Perkins, 94, of Warren to take his place on the trip to Europe.

“He wanted to go,” said his caretaker for the past 2 ½ years, Geraldine Thompson, “and he kept saying, ‘I hope I can go.’ Then he became ill and he knew in his heart he wouldn’t be able to make the trip.” 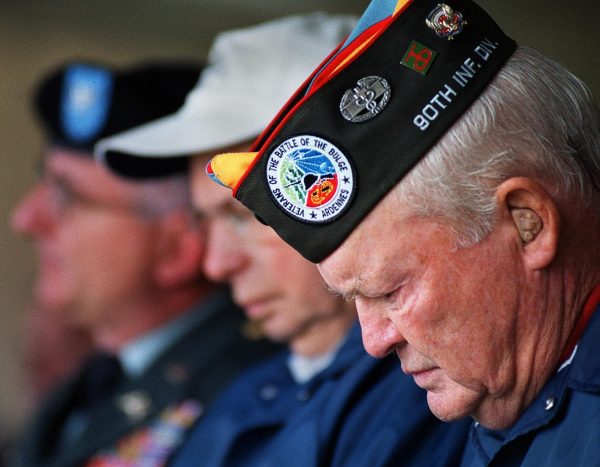 Dr. John E. McAuliffe of Worcester, far right, listens to speakers during the dedication of interchange 10a of the Massachusetts Turnpike as the “Veterans of the Battle of the Bulge Central Massachusetts Chapter Interchange” at a 2002 ceremony. [T&G File Photo]

Battle of the Bulge ceremonies were scheduled for Friday through Monday in Bastogne, Belgium. On Dec. 16, 1944, Germany mounted its final major offensive campaign on the Western Front in World War II. The Allied forces were caught off guard, but they prevailed five weeks later and Germany never recovered. Germany surrendered the following May.

As a combat infantryman in the U.S. Army, McAuliffe was among the reinforcements at the Battle of the Bulge under Gen. George Patton. He later called fighting and sleeping in more than a foot of snow in the Ardennes Forest in Belgium as the coldest and darkest days of his life, and he wrote several poems about his experiences. He received several military awards, including the Bronze Star.

“He’d always said he was just a kid doing what he was told to do,” said his niece, Elizabeth Murphy, 59, of Worcester.

McAuliffe was divorced and had no children, but he was close with several nieces and nephews. 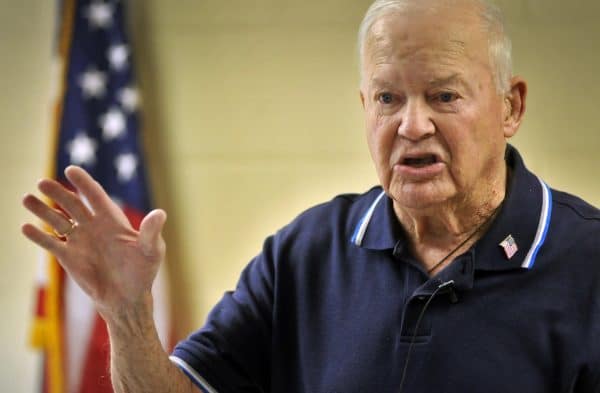 “He was just a very positive, kind, gentle, warm person,” said his niece, Deborah A. O’Malley, 65, of Worcester. “To him, the glass wasn’t half full, the glass was always overflowing. He saw the good in everything and I think that’s part of why he lived so long. He didn’t carry anger or grudges.”

He also stayed active. He attended Mass faithfully at St. Paul’s Cathedral and later at Blessed Sacrament, where his funeral was celebrated on Saturday. He loved to attend concerts and museums, as well as sporting events at Holy Cross, his alma mater. Sometimes he was one of the few fans at a HC baseball game on a cold spring day. He was a frequent writer of letters to the editor to the T&G.

“He loved the city of Worcester,” Thompson said. “He would support people who were trying to improve the city.”

“He loved it,” Murphy said. “He would just drive up there and he’d always come home with these stories of the people he met and people would be taking him to lunch afterward.”

O’Malley wrote her uncle’s lengthy obituary with help from several folders of notes he had left for her. She said the obituary could have been twice as long if she had included every organization to which he belonged.

Most of the stories McAuliffe told his family were about others, but a couple of weeks ago he shed tears while relating how he walked past a dead German during the Battle of the Bulge, then turned around, went back and prayed over him. He told his family that the German may have been the enemy, but he was still one of God’s children.

McAuliffe returned to the scene of the Battle of the Bulge several times, including for the 60th anniversary in December 2004 when he had the honor of laying a wreath at the Mardasson Memorial in Bastogne, Belgium. He was founder and president of the Central Mass. chapter of the Massachusetts Veterans of the Battle of the Bulge Association. He received the Veteran of the Year Award from the Worcester Veterans Council in 2000 and served on the committee for the city’s World War II memorial on the common.

“It filled his later years,” O’Malley said. “It was sort of like a godsend to him. When you’re 85, 90, you can sit home alone or you can be out doing stuff. He was really devoted to making sure people honor all veterans, the young ones and the people of his era.”

For his work on behalf of veterans, he was presented the key to the city in 2012.

For several years, McAuliffe tossed a wreath into the pond from the Elm Park bridge during Memorial Day weekend celebrations to honor military personnel who died at sea, but last May he threw confetti. He told Thompson that confetti was more appropriate to honor all the soldiers who had fought in all the wars.

At Georgetown University’s dental school, McAuliffe was a classmate of Frederick Niland, the inspiration for the 1998 Tom Hanks movie about the Normandy invasion, “Saving Private Ryan.”

“When that movie came out,” Murphy said, “he was so excited to tell us the stories of being at Georgetown with him and how proud he was to have met him and what a sacrifice their family had made.”

During the Korean War, he served as the post dental surgeon at Fort McNair in Washington, D.C., before practicing dentistry for 36 years in Worcester. He had planned to go to medical school, but he was hard of hearing, a condition worsened by working with mortars, artillery weapons that fire explosive shells. So he wore two hearing aids for the rest of his life. As a disabled veteran, he thought he couldn’t become a doctor because he wouldn’t be able to hear well enough through a stethoscope so he went to dental school instead.

The walls of his small apartment in the Pleasant Tower Apartments were covered with his honors and awards as well as photos and articles of others, including Patton and Oliver North. Last summer, Murphy asked where her photo was and he replied that she was on his wall of honor. Then she discovered photos of her and her sisters hanging between those of Ronald Reagan and Pope Francis.

Perkins and fellow Battle of the Bulge veteran Joe Landry, 95, of Shirley visited McAuliffe at St. Vincent Hospital and Holden Rehabilitation and Nursing often. Landry and Charlie Sanderson, 94, of Lunenburg also made the trip to Europe.

Timothy P. Murray, president and CEO of the Worcester Regional Chamber of Commerce, and District Attorney Joseph D. Early visited McAuliffe at Holden Rehabilitation and Nursing a couple of weeks ago. Murray was a city councilor and chaired the military affairs subcommittee when he first met McAuliffe.

Joe Pagano, who lives next door to Murphy and owns Pagano Media in Worcester, videotaped interviews with McAuliffe during the final days of his life and plans to present them to his family. Three interviews with McAuliffe, including one of why he named the Central Mass. chapter of the Massachusetts Veterans of the Battle of the Bulge Association after Dr. Lamar Soutter, are linked to this story. Soutter was awarded the Silver Star for his duty at the Battle of the Bulge and was one of the founders of the University of Massachusetts Medical School.

A nurse told McAuliffe she had never seen so many dignitaries visit anyone before.

“I’m nobody,” Murphy remembers McAuliffe saying. “I’m just a person who always tried to do the right thing.”

“That summed it up,” Murphy said. “That’s who he was. He was just the best. As my kids say, ‘When you talk about Uncle John, you have to talk in superlatives.’ “

“It was an honor to take care of that man,” Thompson said. “I’ll never forget it.”