78 years after the ‘Day of Infamy,’ few survivors remain

Just days before the 73rd anniversary of Pearl Harbor, as the interview wrapped, and in a moment so melodramatic it could’ve been scripted, Navy veteran John Schleicher faded fast. The 93-year-old Nokomis resident began to drool, his words slurred into indecipherability.

The next day, his son Dick called with bad news. Dad, a crew member of the USS Pennsylvania, had suffered a massive stroke and was in hospice care. And it became obvious that he had bottled up his eyewitness account of what President Roosevelt called the “Day of Infamy” until the very last minute. Dick hadn’t even known his father was at Pearl Harbor.

Now, suddenly, all that was left was a story on videotape, along with Schleicher’s brief explanation for his 73 years of silence: “I didn’t wanna talk about the war. I didn’t wanna have nothing to do with it.” 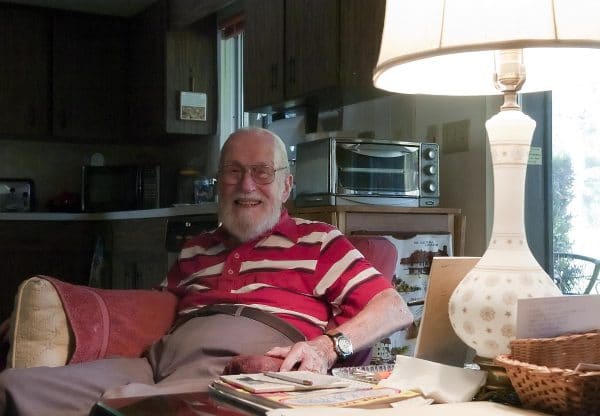 James Wherritt, shown in 2010 at age 95, survived the Pearl Harbor attack in 1941 while he was serving as a chief machinist mate for the U.S. Naval Reserve. [Herald Tribune Staff Photo / E. Skylar Litherland]

I can’t remember exactly how many of these folks I’d interviewed over the years, and nobody knows how few are left. When the bombs struck Pearl Harbor, anywhere from 50,000 to 80,000 U.S. military personnel were in harm’s way.

To qualify for membership in the exclusive Pearl Harbor Survivors Association, however, veterans had to have been positioned within a 3-mile radius of the attack from 7:55 a.m. to 9:45 a.m. on Dec. 7, 1941. The PHSA formed in 1958 and enjoyed peak membership in the 1960s, when some 20,000 were paying dues.

Today, with the youngest eligible members approximately 96 years old, PHSA survivors are now as rare as Civil War veterans in the nuclear age.

In fact, the PHSA held its last formal gathering at the USS Arizona Memorial in 2010, then officially folded in 2011. And with just seven members remaining, the San Diego chapter of the PHSA — perhaps once the nation’s largest, with 586 men — finally called it quits in September.

This weekend, the National Park Service expects to host 35 World War II survivors in Hawaii, according to a spokesperson, just 15 of whom saw the sneak attack unfold. “Only a few hundred Pearl Harbor survivors remain,” she stated in an email.

For well over half a century, their annual pilgrimages to the sunken wreck of the Arizona were as much a seasonal as a cultural tradition. It seemed as if they would always be there, converging at its submerged tomb within two weeks after Thanksgiving, on the front end of the Christmas shopping rush, offering a glimpse of sobriety amid the commercial cacophony.

To me, they had always been old men, with their Hawaiian shirts and floral leis and PHSA baseball caps and white slacks and white shoes. Their stories had been mythologized long before I’d reached adulthood, in big-screen dramatizations like “Tora Tora Tora!” and “From Here To Eternity.” And even as mortality began thinning them out, their Hollywoodized narratives surged into the 21st century with computer-generated pizzazz.

All had been flung, randomly, literally, into each other, into history, from every corner of America, from farms and inner cities and everything in between. And while many shared their stories out of a sense of duty, it was truly impossible to make outsiders smell and hear the carnage that left 2,335 sailors, soldiers and airmen dead and 1,143 wounded. Some, like Vernon Olsen of Port Charlotte, were perplexed over the popular translations.

With Japanese warplanes ripping apart the Pacific Fleet, Olsen had scrambled to his .50-caliber gun station aboard the Arizona, only to find it unloaded. He abandoned ship when the battlewagon’s ammo magazine blew and killed 1,177 in a flash.

Sixty years later, he watched filmmaker Michael Bay’s big-budget attempt to stage the scene. “It wasn’t exactly as I remembered,” recalled Olsen, whose ashes are now scattered in the tropical waters with the men he left behind. “… Some of it was kind of strange.”

Like Montgomery Clift’s Private Prewitt in “From Here To Eternity,” Englewood’s John Seelie joined the Army on the momentum of a distinguished amateur boxing career. But Tinseltown would’ve been hard-pressed to reconstitute the gore and the blade-to-bone impact described by the undefeated Golden Gloves welterweight during bayonet fighting on Guadalcanal in 1943.

So far as anyone could tell, when he visited the National September 11 Memorial & Museum in 2017, Seelie was the last living link to Schofield Barracks, which erupted into frenzy during Japan’s attack on the flight line at nearby Wheeler Field.

Just three months before his death, Seelie managed to rise from his wheelchair for a standing salute during Memorial Day ceremonies in New York. Press coverage cast him as a symbolic bridge between an isolationist America and the America whose global pre-eminence has been put on enduring trial by religious fanatics armed with box-cutters.

B-17 gunner/radio operator Jim Fulton was only half joking when he reamed me out for driving up to his home in Cocoa Beach in a Toyota. He had dodged Japanese bombs at Hickam Field.

After learning that the annual B-52 bomber flyover of Hawaii was being canceled for Dec. 7, 2001, Fulton went ballistic. The historian for the 23rd Bomb Squadron Association called base headquarters in Minot, North Dakota, for an explanation.

“The guy said he’d been told that, because of the suicide attacks in New York City, if they were to let a big plane fly over Honolulu,” Fulton recalled, “there’d be a mass panic.” Fulton raised so much hell with the Federal Aviation Authority, which made the decision, that the FAA reversed itself and bowed to tradition. “We had to settle for 1,500 feet,” he grumbled, “which I thought was a little high.”

For some Day of Infamy survivors, the 9/11 attacks revived sickening memories of how America downplayed the flashing red warning lights preceding Japan’s attack.

“I think what we’re looking at in both cases was the intelligence factor, which had been so horribly mismanaged at the Twin Towers and at Pearl Harbor,” lamented Navy veteran Richard Jeffrey, who was aboard the USS Maryland when it was rocked by a 500-pound bomb.

“The lesson to be learned here is, if you’re in the business of gathering intelligence,” said the Viera resident, “for God’s sake, give it to the people who are supposed to have it.”

Navy veterans such as Frank Smith remembered seeing the actual faces of enemy pilots as they swarmed to within hundreds of feet of their targets. The return fire was furious, bringing down 29 Japanese warplanes, but the chaos of stray rounds claimed the lives of dozens of civilians on shore.

Smith was in the machine shop of the USS Whitney, a destroyer tender, when the air raid began. What he remembered were deck gunners shooting off one of the Whitney’s own aerials. The confusion mirrored the recollections of fellow Venice resident Jim Wherritt.

Records from the Navy Historical Center indicate that Wherritt’s ship, the USS Sacramento, berthed in a repair yard, away from primary targets on battleship row, performed rescue/salvage operations with “exemplary conduct” and sustained no casualties. “Sacramento AA machine gun fire,” the report added, “aided in destroying an enemy plane crossing (the) stern distant about 200 yards.”

Wherritt laughed at that one. “One of our gunners shooting at the planes knocked off our own flagpole,” he said. “That was about it.”

Richard Hyde, of Venice, was at Schofield Barracks. His 24th Infantry Division exacted revenge from New Guinea to The Philippines, in campaigns he declined to detail. But the experience made at least some of his subsequent choices easy. He avoided war movies and boycotted Japanese cars for the rest of his life. “That’s just the way it is.”

Ralph Landreth, on the other hand, refused to let the past shape his future. The Rockledge resident was aboard the Arizona. While attending the 60th anniversary, Landreth noted a number of emotional Japanese veterans in attendance, the same ones who bombed his ship.

“Well, you know,” Landreth said, “I guess there are still some hard feelings toward them, but that was a long time ago, and I’ve got my Sony electronics and my Japanese cars.”

In the immediate aftermath, Navy veteran Robert O’Neill of Bradenton spent an 30 exhausting hours retrieving survivors and corpses from Pearl Harbor’s oil and debris. He would finish the war aboard the USS Pomfret, a submarine that attacked Japanese shipping lanes in the western Pacific.

The Pomfret was in Tokyo Bay for the surrender ceremonies on Sept. 2, 1945. Shortly thereafter, O’Neill visited Hiroshima to explore the new world of atomic warfare. But he said it looked like Pompeii after Mount Vesuvius.

More than a few said they remembered attending military parades before Pearl Harbor, watching veterans of the Spanish-American War marching alongside World War I survivors. Some, like John Schleicher, left behind the impression that they would’ve traded their roles in history’s endless cycle for a little more humanity.

Married in 1943, he didn’t see his first-born, a daughter, until the killing was done.

“She came running for me when I got off the plane,” Schleicher remembered moments before his fatal stroke, “like I’d never been away from her.”