Pfc. Roger W. Taylor left his family’s farm in the Beloit area 75 years ago for deployment to Europe during World War II.

But the dog tags he wore during his 22 months of Army service finally finished their journey back to his home town. 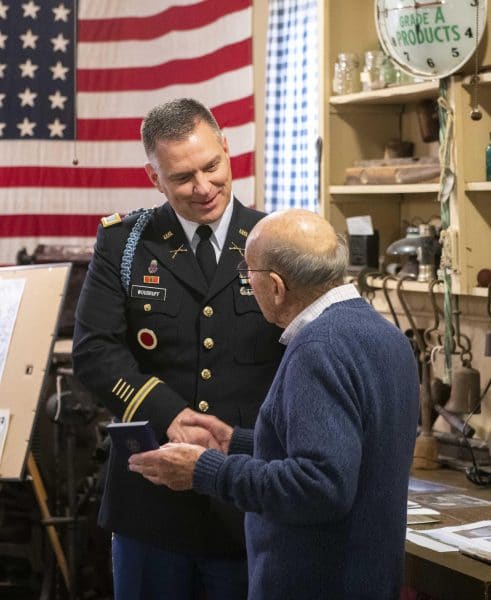 “It’s an honor to be able to give this to your historical society to have one more thing and one piece of Beloit history that you can continue to preserve with the rest of the artifacts that you guys have been able to maintain,” said Woodruff to applause.

“It is quite an honor for us to receive this,” said VanCamp, 90, who knew Taylor’s parents. “We will preserve it with the all of the integrity and might that we have.”

Roughly 60 attended, including Virginia Israel Bandy, now 94, who was engaged to Taylor when he visited Beloit while on leave in July 1944 before he was sent to England.

But then she received the heartbreaking news around Jan. 6, 1945 that Taylor, a replacement infantry soldier, had gone missing near Lutrebois, Belgium during the Battle of the Bulge. Then her worst fears were realized when his body was discovered in February 1945. He had been killed by enemy shrapnel. 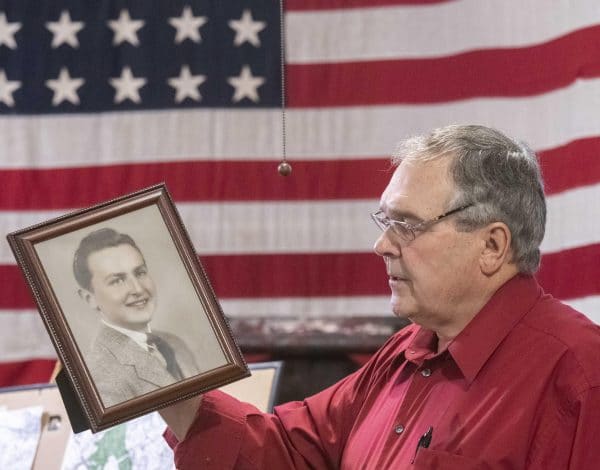 Taylor later was buried in a military cemetery in Luxembourg.

In an area of France, near the border with Belgium, a French resident unearthed the dog tags of Taylor and several other American soldiers. It was unclear how they ended up there. Word of this got to the U.S. Embassy in Paris, which received the dog tags, contacted the Beloit Historical Society earlier this year.

Taylor was an only child. His parents are deceased, so he had no known family members to receive the dog tags.

“I am so surprised but so happy for him,” said Virginia Bandy. “So happy for Roger because he was a wonderful person. I just can’t imagine when I saw the newspaper article (announcing the discovery of the dog tags), it just hit me so hard that just for three days, I was knocked out.”

Bandy’s son Ken Bandy, of Knox Township in Columbiana County, delivered a detailed history about the relationship between Taylor and his mother and Taylor’s deployment to Europe for more than 90 minutes. He read entries from this mother’s diary in 1942 about her dates with Taylor. And he displayed a map of the area where Taylor was killed in action and discussed the movements of U.S. and German soldiers during the battle and the horrific winter weather and combat conditions. 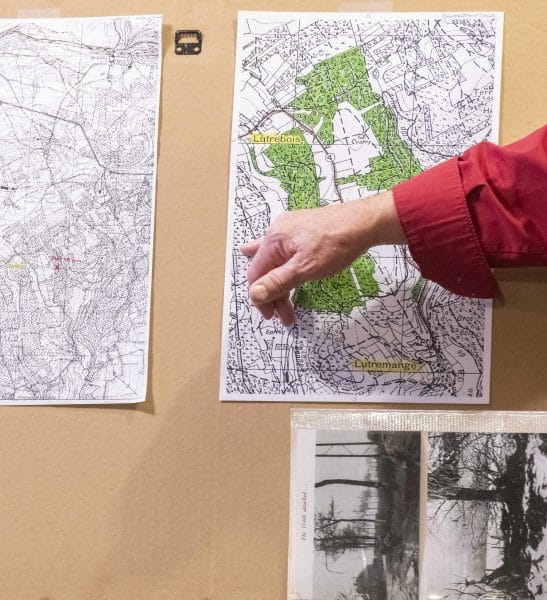 Ken Brady illustrates troop movements during the WWII Battle of the Bulge at the Beloit Historical Society “Remebering Roger” memorial service Sunday Dec. 29, 2019. Just outside of the Belgium town of Lutrebois, a few days into the conflict, is where Beloit native Roger Taylor lost his life to shrapnel from an artillery shell. (CantonRep.com / Aaron Self/TNS)

He finished by playing the song, “Requiem for a Soldier.” Ken Bandy, 71, an Army veteran and son and father of Army veterans, held up a picture of Taylor, kissed his dog tag and thanked him.

Also in attendance was William Plilati, 94, of Minerva, who said he served in the U.S. Army in Belgium during the Battle of the Bulge, which took place from December 1944 to January 1945 and killed about 20,000 American service members. He said he was so moved to read about Taylor’s story, he drove from Minerva to Beloit to attend the ceremony.

“I said I’m going to be there because I was on the front line of the Battle of the Bulge on Dec. 16, ’44,” Pilati told the audience, which applauded. “Ken, when you talked today, you brought tears to my eyes on numerous occasions because I know, I’ve been there. And it wasn’t easy. It was five to 10 below zero and a foot of snow on the ground. … It was complete chaos the first two days. We really didn’t know what was going on.”