Joe Rayburg closed his eyes as he sat in his recliner just inside his Millcreek Township home, his hands folded in his lap and a stiff brown pilot’s cap perched on the end table to his right.

He glanced down, searching for memories of his time as a staff sergeant in the U.S. Army Air Corps in World War II.

“We did test flights and supply runs. Always at night,” Rayburg recalled. “You had your pilot, your co-pilot, radio man, navigator, two waist guns and a tail gunner.” 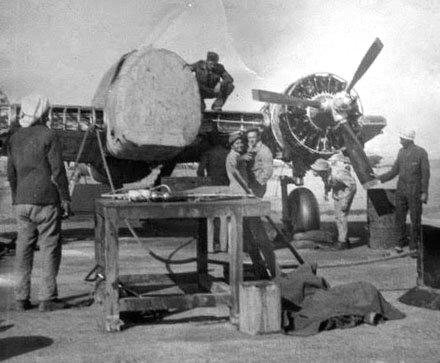 This is a photo of a B-25 bomber that Rayburg and his crew worked on during World War II. [CONTRIBUTED]

He worked on a seven-man air crew that flew supplies and equipment to Allied front lines in Italy from an airfield in Cairo, where he was stationed. He and his crew worked on the ground to repair damaged planes, too.

“We wouldn’t carry heavy bombs. We’d carry .50-caliber machine guns,” Rayburg said. “There’d be a rap on the squadron door. Time to get up and get dressed. We’d head for the mess hall and eat, normally oatmeal and coffee. We’d head for the briefing room and that’s where we’d find out what we were going to do – haul ammunition, haul gasoline.” 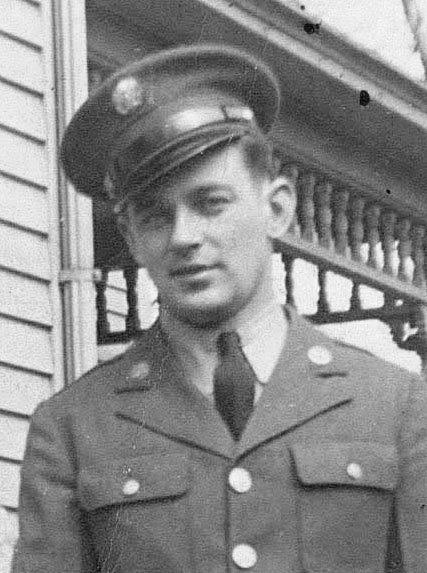 This is an undated contributed photo of Staff Sgt. Joe Rayburg, who served in the U.S. Army Air Corps flight maintenance crew during World War II. Rayburg, of Erie, turned 100 on Sunday. [CONTRIBUTED]

Rayburg, who turned 100 on Sunday, enlisted in 1942 when he was just 23 years old. He was working as a mechanic at a bus station in Erie when his boss called him into his office.

“He said ‘Look, you know you’re going to get drafted. You’d better go sign up,'” Rayburg said. “So my buddies and I did.”

Rayburg was trained in Mobile, Alabama, to fly planes, specifically B-25 bombers. He was assigned to the 8th Air Depot Group in the Army Air Corps and went to North Africa. 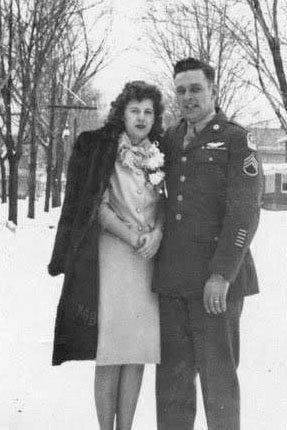 This is an undated contributed photo of Mary Jane Rayburg and her husband, Staff Sgt. Joe Rayburg. The photo was taken in 1945 in Erie after the war. [CONTRIBUTED]

His airfield was located right at the Suez Canal.

Rayburg’s most memorable mission was when he was operating a plane that was hit over Italy.

“I had 55-gallon drums of gasoline in a DC-3 and we picked up a hot bullet,” Rayburg said. “We started smelling smoke and that’s when we knew we had to get out of there.”

Rayburg was piloting the plane. He and his co-pilot decided to stay with the plane to crash land.

“The other five guys parachuted out,” he said. “Still today, I don’t know whatever happened to them.”

The two were picked up by two Italian boys who covered them with brush in a ditch until the next day, when the boys’ parents helped them escape the town and get back to Cairo.

“They showed us the hospitality because, at that point, they knew which way the war was going. (Benito) Mussolini had surrendered.”

Another particular mission that he recalls is flying supplies to the front lines when his co-pilot was killed.

“Ground fire is really what we normally worried about,” Rayburg said. “It came right through the bottom of the plane and I remember that he was strapped to the seat. The wheel was still in his hands.”

Rayburg wrote love letters to his girlfriend, Mary Jane Brink, in Erie. The two became engaged when he was home on leave on Valentine’s Day and they were married Feb. 27, 1945.

The war was over not long after. When Germany surrendered in May, the news was met with some skepticism in Cairo, Rayburg said.

“We were all a little weary because that news was coming over on Italian radios and we thought it could have been propaganda,” he said.

His crew was flown from North Africa to South America and then to the United States, where he was taken by train back to Erie. He never flew a plane again.

“He’s taken trips as a passenger, but he’s really not comfortable with flying,” said Deac Manross, Rayburg’s son-in-law. “I don’t think he ever really cared to be in a plane again.”

Mary Jane Rayburg died in 2002 after 56 years of marriage. Joe Rayburg Jr. served in the Vietnam War and died due to exposure to Agent Orange, Holden said.

Deac Manross began talking to Joe Rayburg about his war experience some five years ago.

“We’d never heard about any of this up until around five years ago,” Manross said. “We want to document it now the best we can.”

Kathy Holden, who cares for her father part-time in his home, agreed.

“I’m here nearly every other day,” she said. “Hearing him talk about this now is just eye opening.”

“Work hard and eat well,” he said. “That and I have such a great family that takes such good care of me.”