A junior at Northeastern High School in Detroit at the time, Cervini Sr. joined the U.S. Marine Corps during World War II.

He served overseas at the tail end of the war including China.

It wasn’t the last time Cervini Sr. — who immigrated to the United States with his mother in 1929 from Ceccano, Italy — would find himself in southeast Asia in service to the country. 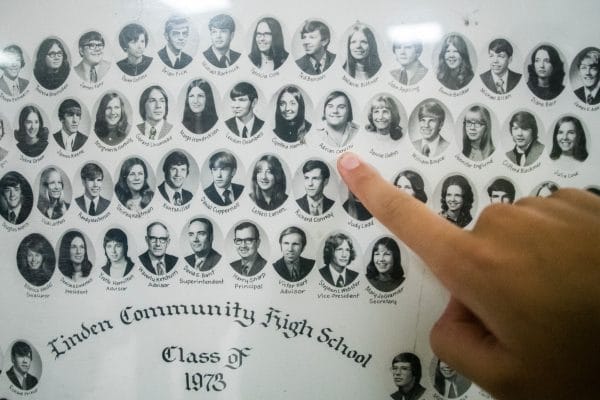 After Adrian Cervini Sr. received an honorary diploma, his great granddaughter MaKenzie Cervini, 11 of St. Charles, points out his son — her grandfather — in a Class of 1973 poster in the hallway after a school board meeting on Wednesday, Sept. 4, 2019 at Linden High School. Cervini Sr., 91, served as a U.S. Marine in World War II and the Korean War.

A few years later, Cervini Sr. found himself in Korea as part of the Marine Corps Reserve.

While in Korea, Cervini Sr. found himself as part of the 1st Marine Division in the Battle of Chosin Reservoir where soldiers faced brutal conditions and were surrounded by enemy troops near the border of China. 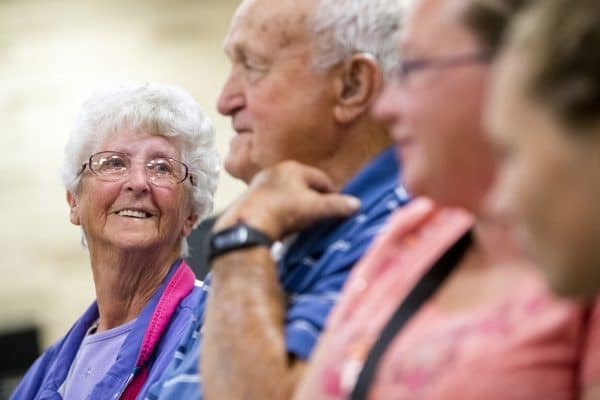 Marilyn Hansen, friend and neighbor, smiles as she watches the reaction of Adrian Cervini Sr., a 91-year-old World War II and Korean War veteran, who smiles upon the surprise of an honorary diploma from Linden Community Schools during a school board meeting on Wednesday, Sept. 4, 2019 at Linden High School. Cervini Sr. served as a U.S. Marine.

After coming home, Cervini Sr. worked several jobs including as a police officer in Farmington Hills, as well as Montgomery Ward, Frank’s Nursery, and EDS.

Something Cervini Sr. was not able to do was get back those high school years and receive his diploma. 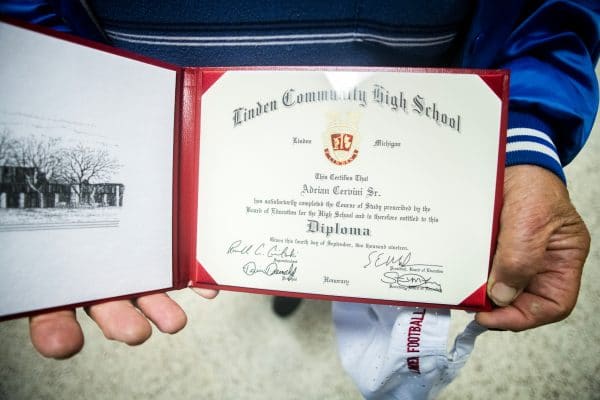 Adrian Cervini Sr., a 91-year-old World War II and Korean War veteran, holds onto his honorary diploma from Linden Community Schools during a school board meeting on Wednesday, Sept. 4, 2019 at Linden High School. Cervini Sr. served as a U.S. Marine.

“I work for Ashley Public Schools. We kind of did something similar for one of the other vets in our area,” said Cervini III. “I thought how cool is that…He’s been waiting 73 years for a high school diploma that he never got, unselfishly he dropped out of high school and fought for his country.

“That’s something I don’t think you’d see very much in today’s society, today’s generation of kids,” Cervini III said. “I just thought it was time before there is no time left.”

At a September school board meeting, Cervini Sr. was asked to attend but caught by surprise when he became the star of the gathering.

“He has seen things you and I can’t even dream of,” said Ciesielski, noting Cervini Sr. had two children that attended Linden schools in the 1970s. “He still is very much involved with the Marines working with the Toys for Tots campaign and visiting VA hospitals as well as our local post here in Linden.”

Cervini Sr. also takes part in military funerals at Great Lakes National Cemetery in Holly “to ensure that every soldier is not forgotten and that they have a proper burial,” Ciesielski said.

In presenting the diploma to Cervini Sr., Maker told the assembled crowd that included family and friends “As any Marine would especially of his group will decline the status that we hold them in, but if anyone has read history, this man has lived history.”

“It’s great to have individuals like Andy in our community. He’s going strong…he still has that commitment to our community to his fellow servicemen and to our American citizens.” said Maker. “It’s a great honor to be able to bestow a small token of our appreciation of an honorary diploma from Linden High School to Andy for all he’s done for our community and continues to do.”

“We talk about it now with the current events we’re dealing with in our society today and the young men and women that sacrifice family time and personal lives for our freedoms,” said Ciesielski. “You think back, World War II, we had somebody like Adrian Cervini that went through the same decision-making process and made the same decision, that I’m here to protect America and the rights of our society.”

When asked what he wanted the younger generation to know, Ciesielski said Cervini Sr. responded: “Don’t expect anything unless you work for it. Nothing in life is free.”