Donald Trump’s more than three-hour Thanksgiving fly-in to Afghanistan was a closely guarded secret, carried out with cloak-and-dagger precision to ensure the U.S. president’s security.

After what seemed like a normal day at his Mar-a-Lago resort in Florida with a round of golf Wednesday morning, the president was spirited away and flown back to the Washington area from an undisclosed airport late Wednesday — unbeknownst to press traveling with him. 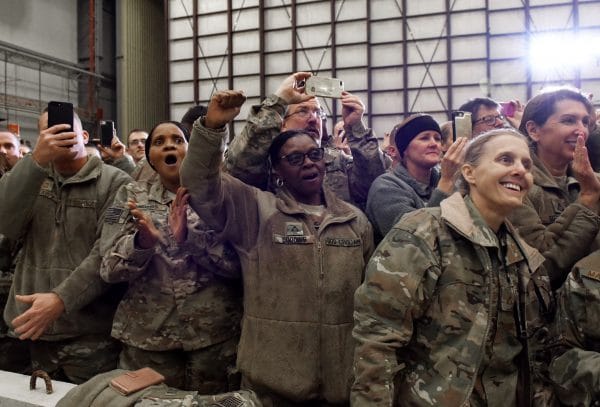 US Soldiers react with cheers and applause as US President Donald Trump arrives in Bagram Air Field during a surprise Thanksgiving day visit, on November 28, 2019 in Afghanistan. (Olivier Douliery/AFP via Getty Images)

Back in Washington, another group of journalists was instructed to gather atop an area parking garage under cover of darkness, where they were picked up and whisked to nearby Joint Base Andrews.

News organizations had agreed to not report on the trip at first due to security reasons. Passengers boarded Air Force One in a closed hangar and took off and landed in the darkened plane, with shades drawn throughout the journey.

Members of the media weren’t told until late in the flight what country Trump was headed to, and Air Force One’s destination clock — typically indicating for passengers the time at their destination — was switched off as well. 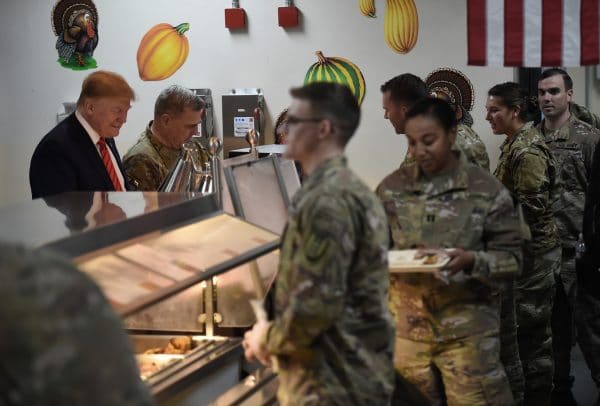 “It’s a dangerous area and he wants to support the troops,” Grisham said. “He and Mrs. Trump recognize that there’s a lot of people who are away from their families during the holidays, and we thought it’d be a nice surprise.”

As part of the tight security, all passengers’ phones and other potential transmitting devices, like tablets, were seized before boarding the plane. The rule applied to everyone on board, leading the White House to queue up a couple of Thanksgiving-themed tweets from the president’s account for Thursday morning. The White House lifted its reporting embargo as Trump was about to leave the country after meeting with U.S. military personnel and the Afghan president. 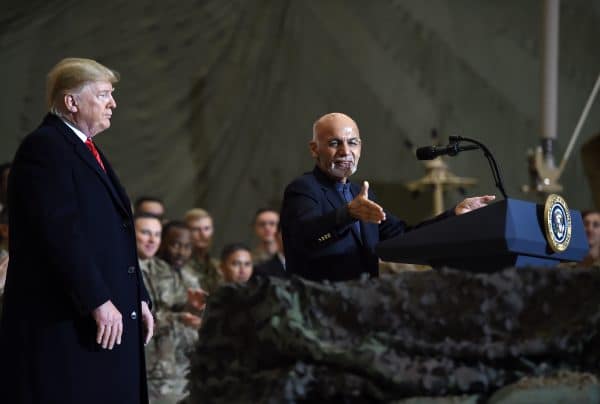 Afghan’s President Ashraf Ghani speaks to the troops as US President Donald Trump listens during a surprise Thanksgiving day visit at Bagram Air Field, on November 28, 2019 in Afghanistan (Photo by Olivier Douliery/AFP via Getty Images)

Trump landed after dark local time at Bagram Airfield after a 12-hour flight during which he didn’t speak to reporters. Aboard the plane, Grisham told reporters that there was a potential meeting with Afghan President Ashraf Ghani at the base, but didn’t know at that time if it would happen. Ghani was given a few hours’ notice of Trump’s visit and was invited to participate in a bilateral meeting on the air base, said Deere, a White House spokesman.

Back in Florida, reporters and photographers who were part of the original press pool may have wondered why Trump took Thursday morning off from golf. They were summoned after midday from a nearby hotel to come to Mar-a-Lago for what had been expected to be a Trump teleconference with troops. 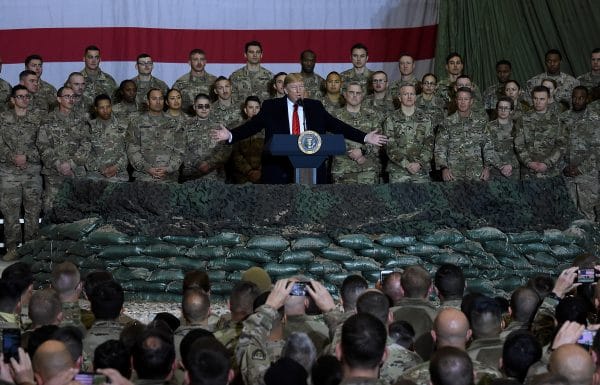 US President Donald Trump speaks to the troops during a surprise Thanksgiving day visit at Bagram Air Field, on November 28, 2019 in Afghanistan. (Photo by Olivier Douliery/AFP via Getty Images)

Once the cat was out of the bag at Bagram, and the president was safely back on the plane, Trump’s Florida press wrangler gave the word: The media assembled there were done for the day.

Meanwhile, Trump had just spoken to the journalists who were actually traveling with him in Afghanistan.

“See you on the plane — unless you don’t want to go,” Trump told reporters. “Maybe you want to stay.”