The President posthumously awarded Orders of Courage to the widows of the employees who died during tests near Severodvinsk. (Kremlin photo/Released)
November 22, 2019 Ryan Morgan
Share
Tweet
Flip

Russian President Vladimir Putin on Thursday told the families of scientists killed in an August nuclear explosion that they were working to develop an advanced weapon when the accident occurred.

Putin sought to pay tribute to the families of at least five people killed on Aug. 8 at the Noyonoksa test facility in the Arkhangelsk region of Russia. According to Newsweek, Putin said the scientists were working on “the most advanced and unparalleled technical ideas” to build a weapon that would guarantee Russian sovereignty for decades to follow.

“The very fact of possessing these unique technologies is the most important reliable guarantee of peace on the planet today,” Putin said in an award ceremony speech.

Putin added, “This is not any ordinary work that led to this tragedy. To devote oneself, one’s life to such a thing is the courageous, serious choice of a real man, citizen and patriot of the country.” 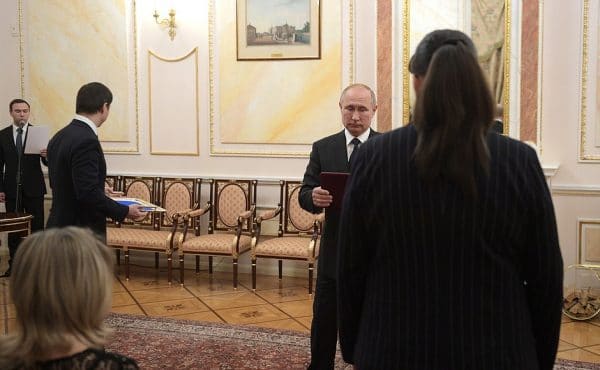 The President posthumously awarded Orders of Courage to the widows of the employees who died during tests near Severodvinsk. (Kremlin photo/Released)

According to a Kremlin press release, Putin presented Russia’s Order of Courage medal to widows of workers killed in the blast.

Putin said Russia would continue to work on the weapon despite the accident. He did not further specify the details of the supposedly “unparalleled” weapon.

Russian officials did disclose a missile test was part of the cause for the explosion soon after it occurred, though they have been relatively secretive about the details of the accident.

International experts have reportedly suggested the weapon was a Burevestnik nuclear-powered intercontinental cruise missile. NATO has designated the missile the SSC-X-9 Skyfall.

The Russian nuclear agency Rosatom had conducted an offshore platform test when a fire caused an engine to explode.

Edwin Lyman, a nuclear expert at the Union of Concerned Scientists in Washington, D.C. speculated a reactor rod may have could have fallen out of place and become unstable.

If this report is accurate, the only way it could be consistent with the isotopes that were reportedly detected is through an inadvertent criticality during the recovery. That may be possible–for instance if a control rod dropped out of the core while the reactor was submerged. https://t.co/yuNi1Ewpdd

One U.S. intelligence sources told CNBC the blast may have been the result of an effort to recover a missile lost in a previous test effort.

When the explosion occurred, the nearby city of Severodvinsk reported radiation levels had risen to 16 times their average. Monitoring stations reportedly stopped transmitting data and medical staff treating injured workers said they were not warned about the potential radiation risks.