The line of traffic for the service of Vietnam War veteran William Louis Wright spilled onto the street outside the Ohio Western Reserve National Cemetery. A representative for the cemetery said the staff believed it was the largest attendance for a committal service at the cemetery since it opened in 2000. [MIKE SCHENK/GATEHOUSE MEDIA OHIO]
November 08, 2019 Emily Morgan - Akron Beacon Journal
Share
Tweet
Flip

Wright, 72, of Youngstown died Oct. 15. Through its Facebook page, the national cemetery invited veterans and the general public to attend the funeral to honor Wright, a veteran of the United States Air Force.

The invitation to the funeral spread across Facebook and veteran organizations’ website. Ken Eastep of Shelby learned of the funeral on an American Legion Writers page online.

“I came to pay my respects,” Eastep said.

Linda Hopkins of Chippewa Lake saw a post from her friend on Facebook. Hopkins decided to attend because she lost her brother Sgt. Jack Hatfield during the Vietnam War in 1969.

“I couldn’t let a soldier go without being remembered,” Hopkins said.

Members of the Triple Nickel salute the casket of Vietnam veteran William Louis Wright prior to his committal service. [MIKE SCHENK/GATEHOUSE MEDIA OHIO]

Traffic was backed up outside the cemetery entrance on Rawiga Road from the north and south shortly before the 9:30 a.m. service. Mark Polen, director of the Ohio Western Reserve National Cemetery, apologized for the delay, which was due to the outstanding turnout and not the dreary weather.

“I’m overwhelmed. This is beautiful,” Polen said. “We very much appreciate you being here.” 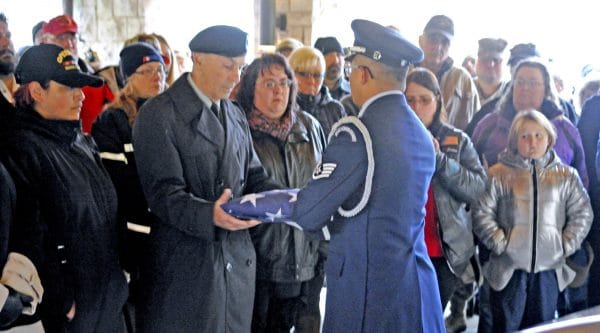 Larry Watson accepts the flag that was draped over the coffin on behalf of the triple nickle since the veteran had no relatives. [MIKE SCHENK/GATEHOUSE MEDIA OHIO]

Cars were parked on both sides of Liberty Road leading to and from Shelter 2 where the committal service was held. The Medina County Marine Corps Detachment performed the honor guard duties while members of the 555th Honors Detachment stood by inside the shelter. Triple Nickel member Larry Watson accepted the folded flag from Wright’s casket.

Following the funeral, a representative for the cemetery said staff believed it was the largest attendance for a committal service at the Ohio Western Reserve National Cemetery since it opened in 2000. He cited the spread of the cemetery’s Facebook post for a lot of the attention.

Wright joined the Air Force on Nov. 22, 1966, and served one tour in Vietnam at Son Nhut Air Base, which was a Republic of Vietnam Air Force facility, according to the cemetery. His awards included the National Defense Service Medal, Vietnam Service, Medal, Republic of Vietnam Campaign Medal and Air Force Commendation Medal.

Ohio Western Reserve National Cemetery is one of two national cemeteries in Ohio.