Pasquale Burgese and Elmore Bing were U.S. Marines together in the same unit during one of the deadliest attacks in the corps’ history.

Although miles away that day, each man shared the same sickening horror and grief at the deaths of 241 of their fellow Marines 36 years ago in their Beirut, Lebanon, barracks.

Burgese and Bing went their separate ways when their military service ended. But they never lost touch. 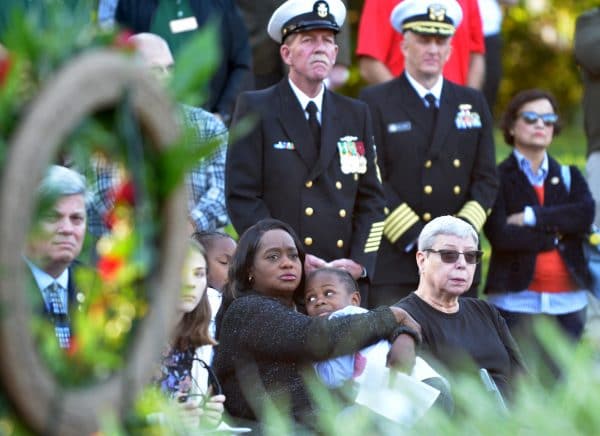 Gold Star mother Carolyn Woods and her grandson, Stephen Marriott (center), 4, listen to guest speaker Al Sandrik, a U.S. Navy veteran who helped care for the marines wounded during the 1983 suicide bombing of the Beirut barracks in Lebanon. About 150 veterans, active duty military personnel and their families came together Sunday for the dedication of the Beirut Memorial by the Semper Fidelis Society at Evergreen Cemetery in Jacksonville. [Dede Smith/For the Florida Times-Union]

Sunday, the Marine Corps veterans reunited at Evergreen Cemetery in Jacksonville to remember and honor their fallen comrades in arms. Bing and Burgese were among the veterans, their families and active duty military personnel attending the dedication of the Beirut Memorial at the cemetery,

“To us, this means everything,” Burgese said.

Many people, Bing said, don’t remember the attack or its impact — represented Sunday by the dog tags from each of Marines, sailors and soldiers killed that day,

“Our first duty is to remember,” said Bing, adding they must keep the memory of the fallen alive.

The Semper Fidelis Society in Jacksonville — a civic and veterans organization composed of Marine Corps veterans, active duty personnel and their families — spearheaded the establishment of the Beirut Memorial. 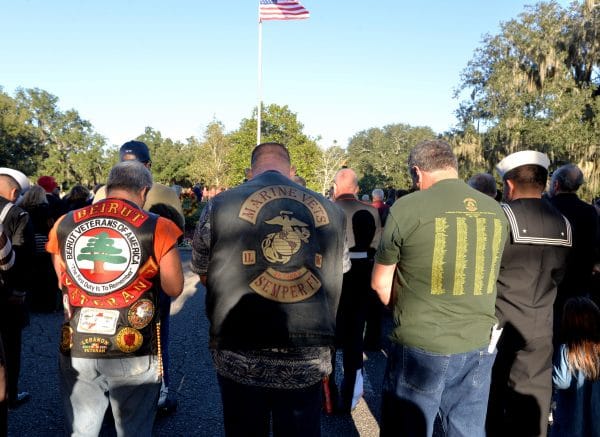 U.S. Marine Corps veterans bowed their heads in prayer Sunday as they remember their fallen brothers in arms during the Semper Fidelis Society dedication of the Beirut Memorial honoring the Marines and other military personnel killed in the 1983 terrorist attack on the barracks in Beirut Lebanon. [Dede Smith/For the Florida Times-Union]

The memorial was dedicated during the society’s 16th annual Marine and Navy FMF Corpsman Memorial Monument re-dedication at the cemetery.

About 150 people gathered at the memorial and monument for the ceremony, which also marked the 244th birthday of the U.S. Marine Corps,

C. Sam Handlee of Jacksonville, a Marine Corps veteran and Semper Fidelis Society leader, said remembering and honoring those who’ve made the ultimate sacrifice is a privilege as well as a duty.

“Without their capacity for life, their voices are silent. They are dead. It is final. It is absolute. And it now falls upon us to tell their story and preserve their legacy of courage and sacrifice,” Handlee said.

The Beirut Memorial stands prominently near the Marine and Navy FMF Corpsmen Memorial inside the front entrance of the cemetery.

“Dead are the 241 marines, sailors and soldiers who died during the attack on the Marine Barracks in Beirut. They are being memorialized here today,” Handlee said.

“The impact of that loss is represented by the 241 dog tags of the men of the [U.S. Marine Corps] 2nd Reconnaissance Battalion Italian Landing Team 18 along with the FMF corpsmen, sailors and soldiers who were also killed in that attack,” he said.

Until now, there was nothing in Jacksonville to remember and honor those marines — including 22 Floridians — killed by the Hezbollah suicide bombing.

The Beirut Memorial is the first in the state honoring the Floridians from Yulee, Daytona, Miami and elsewhere, who died in that terrorist attack, said Suzanne Carson, a Semper Fidelis Society board member.

Carson also said it is only the third such monument in the United States and will honor all those killed in the attack: 241 U.S. Marines, sailors and soldiers at the barracks, as well as 58 French paratroopers at their Beirut headquarters and one Lebanese civilian.

As she’s done for the past 15 years, Alexis Marriott of Jacksonville came to the ceremony to honor her late brother, Julian Woods, a U.S. Navy corpsman who was 22 when he killed in the Battle of Fallujah on Nov. 10, 2004, during the Iraq War.

“It’s just knowing that people care, That they [the fallen} are not forgotten,” she said of attending the ceremony and honoring the corpsmen annually.

Marriott was accompanied by her husband, Stephan, who’s a U.S. Navy chief, their two children and her mom, Carolyn Woods, who is a Gold Star mother.

The Beirut suicide bombing was the largest loss of life in a single action since the Vietnam War in the 1960s. It also was the worst for the Marines since the assault on Iwo Jima during World War II, according to military history.

The Jacksonville monument also honors service members who gave their lives during the 1983 invasion of Grenada in Operation Urgent Fury, which began two days after the Beirut bombing, society members have said.

About 4-feet-tall and 3-feet-wide, the Beirut monument is a granite block with the large bronze eagle, globe and anchor Marine Corps emblem over a plaque memorializing the Beirut dead.