After 75 years, a FL war hero gets France’s highest honor

Glenn E. Pitts, 94, holds a photograph of himself as a U.S. Army Sergeant at age 19, during World War II. He was honored Friday at Jacksonville City Hall for his part in the liberation of France. [Will Dickey/Florida Times-Union]
November 24, 2019 Steve Patterson - The Florida Times Union
Share
Tweet
Flip

Glenn Pitts has been a laundry manager, a building contractor and a Jacksonville landlord.

Friday, the French government named him a knight of the Legion of Honor, its highest distinction, for his part in liberating France from Nazi occupation 75 years ago.

“We know what we owe you and your brothers,” Laurent Gallissot, France’s consul general in Miami, told the 94-year-old Army veteran during a ceremony at Jacksonville City Hall. 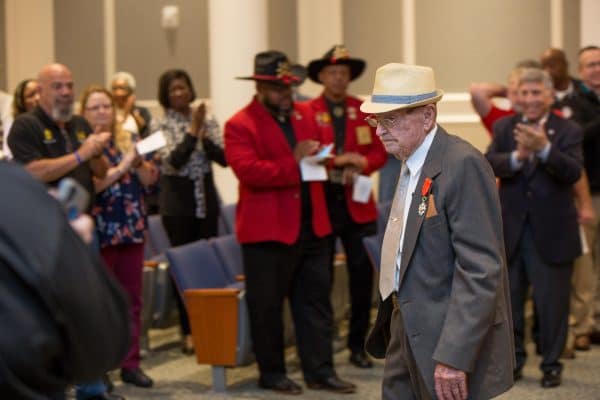 Glenn E. Pitts is applauded by well-wishers inside Jacksonville City Hall after being honored by the French government Friday as a knight in the Legion of Honor. [Provided by the city of Jacksonville]

Pitts, the diplomat said, was “a true hero and a great soldier.”

The 40-person audience filled less than half of the City Council chambers, but praise for the veteran was heartfelt.

“I think we should all be forever grateful,” Council Vice President Tommy Hazouri told Pitts, who lives in the Westside’s Woodstock Park area.

France decided in 2004 — the 60th anniversary of the D-Day landing — to award the medal to any U.S. veteran who had fought on French soil and requested the honor. 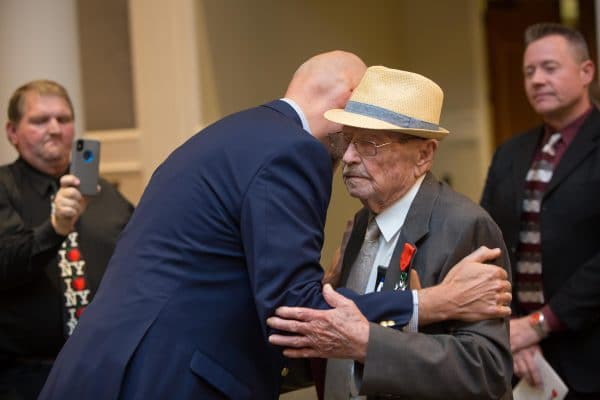 Laurent Gallissot, French consul general in Miami, embraces Glenn E. Pitts (right) inside Jacksonville City Hall on Friday after awarding him the Legion of Honor for his service with the U.S. Army’s 63rd Infantry during World War II. [Provided by the city of Jacksonville]

Gallissot said his office has presented maybe 2,000 since then, some to men whose own families know very little about their experiences in the war.

Combat veterans all experienced some trauma, Gallissot said, and some just prefer not to share those memories. Like Pitts.

“We lost a lot of people, so I don’t talk about it that much,” Pitts told an audience that included people dressed to represent veterans groups.

The broad strokes of his war service were interesting enough.

Drafted when he was 18, the Eastman, Ga. native learned to operate a water-cooled .30-cal. machine gun that could fire hundreds of rounds per minute. He was a private in the Army’s 63rd Infantry Division when he was deployed to the French Mediterranean port of Marseilles in December 1944.

Of five months that followed, he said Thursday, 120 days were spent “on the line,” in combat zones that by February 1945 had advanced to the German border at the Saar River.

By the time troops crossed the river on a rope bridge, he was a 19-year-old squad leader. He would have still been a private, but his squad leader had been wounded and he became the replacement, jumping the ranks to sergeant in one step.

He was still in Germany when the Nazi government surrendered in May 1945 and was reassigned to a Signal Corps unit where he finished out his service.

Back in civilian life, he got a job, raised a family and built some houses. He still rents some of his houses, one of them to the friend who helped him apply for the award after reading about another Legion of Honor recipient. He and Pitts’ family clapped hard to see the quiet man being honored.

“I’m so overjoyed to see him getting this,” said his daughter, Susan Wallace. “He did what he had to, he kept his head down and he got back home.”