Wheels for a warrior: Struggling veteran gets a working vehicle with help from from fellow vet, small army of volunteers

Michael Emerson, chairman and founder of the Vehicles 4 Veterans charity and president of the Stockton AmVets Pittman post, right, hands the keys of a 1999 Chevrolet Suburban to Army veteran Harvey Stenson during a key ceremony Sunday. Emerson coordinated the towing of the vehicle from Lodi to Stockton as well as the major repairs and detailing. [CLIFFORD OTO/THE RECORD/TNS]
October 20, 2019 Joe Goldeen - The Record
Share
Tweet
Flip

This is the story of two humble men. Both served our nation in the United States Army. Both experienced difficult times after their service. One, doing better now, was able to help the other in a big way — with a little help from the community.

In a ceremony last Sunday afternoon at Ohana Car Care Center in central Stockton, 50-year-old veteran Harvey Stenson was handed the keys to a completely refurbished, shiny black 1999 Chevrolet Suburban sport utility vehicle — free and clear, registered and insured in his name, and ready to take his four kids — Sydney, 20; Harvey Jr., 10; Dallas, 9; and Lacy, 4 — wherever they need to go.

A single dad of few words, Stenson — who served in Korea’s demilitarized zone in the early 1990s — explained he has been “struggling for a while,” especially because his main mode of transportation is out of commission and he doesn’t have the money to fix it. 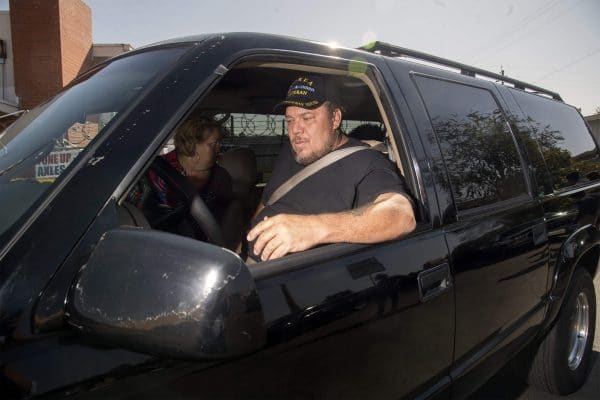 Army veteran Harvey Stenson gets behind the wheel of a completely refurbished, shiny black 1999 Chevrolet Suburban sport utility vehicle given to him Sunday through the Vehicles for Veterans program. [CLIFFORD OTO/THE RECORD/TNS]

“I appreciate this. I appreciate everybody who helped to make this possible. I thank every one of you, and my family appreciates it,” Stenson said in accepting the keys to the SUV.

The transfer of the SUV and the ceremony was made possible through the efforts of Michael Emerson, a veterans’ advocate who is chairman and founder of the Vehicles 4 Veterans charity. Emerson coordinated the towing of the vehicle from Lodi to Stockton by Advanced Towing of Stockton as well as the major repairs and detailing by the crew at Ohana Car Care Center, 1204 Enterprise St. just off West Lane.

Most importantly, he brought Stenson together with a fellow veteran who was in a position to donate his SUV. 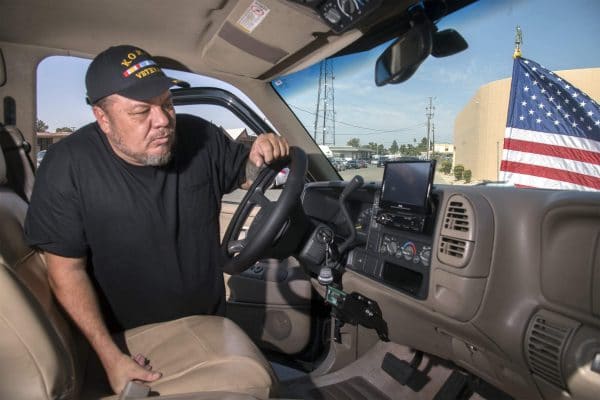 Army veteran Harvey Stenson checks out the interior of a 1999 Chevrolet Suburban that was refurbished and given to him through the Vehicles 4 Veterans charity by fellow veteran Raphael Pazo of Lodi. [CLIFFORD OTO/THE RECORD/TNS]

Raphael Pazo of Lodi, who spent 16 years in the Army and Reserves assigned to the 18th Airborne Corps as a paratrooper in the medical corps serving in Grenada and Panama, said “why not?” when asked what motivated him to donate his SUV. He didn’t hesitate.

“I’m a little melancholy seeing the car go. I took good care of it, hauling four kids and two golden retrievers,” he said.

But he couldn’t ask for a better outcome and next chapter for the SUV.

“I got a lot of help at one point in my life. When you have a chance to pay something forward, don’t hesitate. Pay it forward with a smile. Harvey is a brother veteran, and we really have to be our brother’s keepers,” Pazo said. 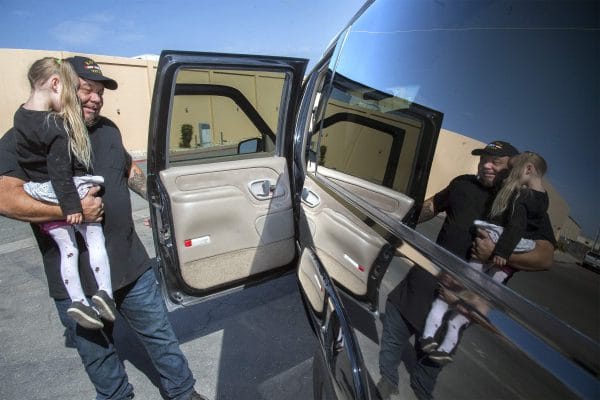 Army veteran Harvey Stenson shows his 4-year-old daughter Lacey the 1999 Chevrolet Suburban that was refurbished and given to him through the Vehicles 4 Veterans program charity by fellow veteran Raphael Pazo of Lodi. A single dad, Stenson said he has been “struggling for a while,” especially because his main mode of transportation is out of commission and he didn’t have the means to fix it. [CLIFFORD OTO/THE RECORD/TNS]

Because the SUV was not running at the time of the donation, Advanced Towing stepped forward to bring it from Lodi to Stockton. “Mike (Emerson) called us. Since my father is a veteran, it was very important for me to give back, and I’m very proud to be a part of this,” Misty Whitney said.

When the SUV arrived at Ohana, it had 145,000 miles on it and needed a new transmission, brakes, air conditioning and an oil change. It got a 72-point inspection “from bumper to bumper” and also got completely detailed, no small feat on one of the biggest passenger vehicles on the road.

R.J. and Fairlani Parungao, who have owned Ohana for the past 12 years, donated all the services.

“A lot of my wife’s family are veterans, and we’ve always supported veterans. We were happy to help a veteran out who needed help,” R.J. Parungao said, also thanking his mechanics for their work on the SUV.

For Parungao, the ceremony at his shop was bittersweet since he lost his mother to cancer just three days earlier.

“I also want to thank all my customers who sent out all their prayers to my mom. My mom wanted to be here, but now God has an angel next to him,” Parungao said, fighting back tears.

Emerson said his charity has organized one previous “key ceremony” for a veteran in Modesto. He has four auto repair shops ready to go to work when the next donation is arranged, stating the requirement for the veteran is that it be their primary vehicle. Information: veteranhelp.net/vehicles-for-veterans/.

This was the story of two humble men, a community that came together — and what continues to make Stockton someplace special.