A 100-year-old World War II veteran finally got to scratch a much-deserved, long-awaited item off his bucket list.

Jack Eaton, the oldest living sentinel of the Tomb of the Unknown Soldier, arrived at Detroit Metropolitan Airport on Wednesday afternoon after spending the morning in Arlington, Virginia, where he saw, for the first time, a recently erected plaque recognizing his guardianship of the monument from January 1938 to December 1939.

“I really like (knowing) that it’s happened,” Eaton said. “This is a thing I’ve been wanting.”

The former U.S. Army sergeant and current Burton, Michigan, resident was met at American Airlines Gate D28 by dozens of cheering, clapping and saluting veterans, public servants and other supporters, all while “America the Beautiful” played. 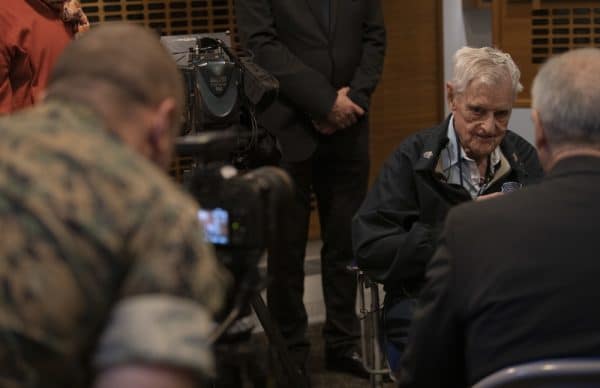 World War II veteran Jack Eaton, 100, is interviewed during a visit to Arlington National Cemetery in Arlington, Va., Oct. 23, 2019. Eaton, a former Army corporal, served as a sentinel at the Tomb of the Unknown Soldier from 1938-1940.
(Staff Sgt. Vanessa Atchley/Released)

“I appreciate everything you people are doing here,” Eaton said. “I just can’t believe that this is happening. I don’t think I did that much — I was just doing what I was supposed to do.”

In 2017, Eaton toured the back barracks of the guards of the Tomb of the Unknown Soldier, where plaques honoring soldiers who guarded the tomb are displayed. 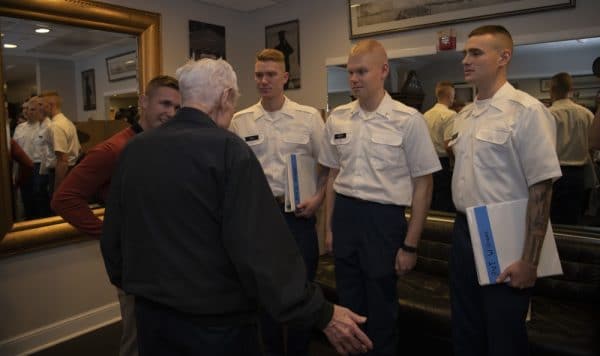 World War II veteran Jack Eaton, 100, talks to Soldiers during a visit to Arlington National Cemetery in Arlington, Va., Oct. 23, 2019. Eaton, a former Army corporal, served as a sentinel at the Tomb of the Unknown Soldier from 1938-1940.
(Staff Sgt. Vanessa Atchley/Released)

A plaque honoring Eaton was nowhere to be found, so he inquired.

Following an investigation, it was found that Eaton did in fact serve, and a plaque with Eaton’s name and dates of guardianship was erected.

When he returned to Arlington in 2018 via the Mid-Michigan Honor Flight, his plaque was displaced, leaving him disappointed a second time.

“He was very upset,” said Eaton’s stepdaughter, Brenda Warburton. “Someone described it as a 5-year-old who was told their birthday party had been canceled.”

The president of Mid-Michigan Honor Flight contacted American Airlines last month and was able to secure flight arrangements to and from Washington, where Eaton ultimately received his due honor Wednesday.

“It was great to finally see his name there,” Warburton said. “He even got a little choked up, and that’s kind of unusual for Jack.”

The spry 100-year-old received gifts from American Airlines and other organizations, and stood for seemingly every person that shook his hand.

Eaton marched with the Honor Guard and the Patriot Guard Riders across the North Terminal as hundreds of travelers, some visibly emotional, erupted in cheers as he walked by.

Scott Hungerford of the Patriot Guard Riders said the event was special because of Eaton’s status as a Tomb sentinel and a centenarian.

Corinne Shields is part of the Willow Run Tribute Rosies, who dress up as Rosie the Riveter and greet veterans at events like this one. A few Rosies followed the procession through North Terminal.

Shields says she’s glad Eaton “got a kick” out of the event.

“I’m very proud to do something, however tiny, for that amazing generation,” Shields said.