The warship is the nation’s ninth Freedom-variant Littoral Combat Ship, commonly known as LCS. The milestone means the ship — built by a Lockheed Martin-led team — is ready and authorized for deployment. 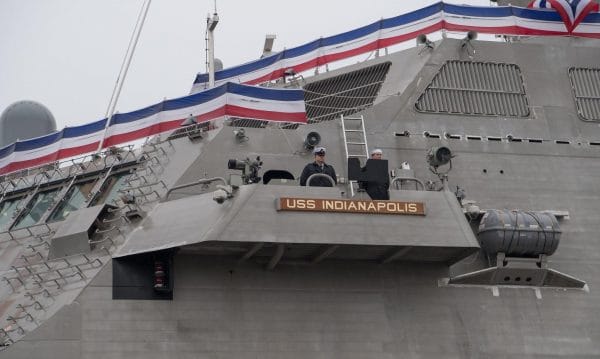 Littoral Combat Ship 17, the USS Indianapolis, was commissioned into active service in the U.S. Navy on Saturday, Oct. 26 in Burns Harbor, Ind. and will be home-ported at Naval Station Mayport. [U.S. Navy/Provided]

“Indianapolis’ speed, flexibility and lethality bring a unique set of capabilities to the fleet,” said Joe DePietro, vice president and general manager of Small Combatants and Ship Systems at Lockheed Martin. “She is equipped and ready for today’s threats and can easily integrate new capabilities for tomorrow’s threats. Our team is confident Indianapolis will be what the Navy needs when the fleet needs it.”

The vessel is part of a growing LCS squadron homeported at Naval Station Mayport. The Navy has said it is scheduled to have 14 LCS at Mayport by 2023. Six of those already are at the station. The most recent, the USS Billings, arrived in August.

Littoral Combat Ships (LCS) are unique among combat vessels. The focused-mission LCS is designed to support mine countermeasures, anti-submarine and surface warfare missions, and is easily adapted to serve future and evolving missions, according to the Navy.

Top features of the Freedom-variant LCS include:

Flexible — 40 percent of the hull is easily reconfigurable, able to integrate Longbow Hellfire Missiles, 30 mm guns, and manned and unmanned vehicles designed to meet current and future missions.Lethal — LCS is standard equipped with Rolling Airframe Missiles (RAM) and a Mark 110 gun, capable of firing 220 rounds per minute.Fast — LCS is capable of speeds more than 40 knots.Automated — LCS has the most efficient staffing of any combat ship.Cmdr. Colin Kane, the commanding officer of the Indianapolis, said the vessel’s crew is among the best.

“The crew gives the ship its own personality and war-fighting spirit. The men and women of USS Indianapolis exemplify patriotism, grit, and what this great country of ours stand for,” Kane said. “I am extremely proud to have all of [the USS Indianapolis crew] as shipmates.”

Currently, there are seven ships in various stages of production and testing at Fincantieri Marinette Marine in Wisconsin, where the Freedom-variant LCS is built.

The next Freedom-variant in the class is LCS 19, the future USS St, Louis, which is on track to begin sea trials later this year.

“On behalf of the proud 2,000 men and women who transform flat steel into a fast, agile surface combatant, we are honored to support the U.S. Navy, and we congratulate the outstanding crew of the USS Indianapolis,” said Jan Allman, CEO of Fincantieri Marinette Marine.

LCS are designed to hold a 50-person crew. The 388-foot ship, designed for a maximum draft of 14 feet, is part of a Navy push to use smaller, lighter ships that are equipped for changing missions in shallow coastal waters.