SANTA RITA, Guam (Aug. 19, 2010) – Master Chief Petty Officer of the Navy (MCPON) Rick West meets with chief petty officer selectees from the submarine tender USS Frank Cable (AS 40) during his visit to U.S. Naval Base Guam. MCPON is continuously traveling and meeting with Sailors worldwide to answer their questions and address their concerns on a wide range of issues, from career and professional development, warfare qualifications, promotion opportunities, to quality of life, health and worklife balance. MCPON is continuously assessing and reporting on what is foremost on Sailors’ minds to naval leadership and Congress (U.S. Navy photo by Mass Communication Specialist 1st Class Jennifer A. Villalovos)
October 01, 2019 Ryan Morgan
Share
Tweet
Flip

The U.S. Navy implemented the blue camouflage —often referred to as “blueberries”— in 2008, but it has been eyeing a change since 2016 to adopt the green pattern of its expeditionary units as a universal pattern for all of its service members, The Virginian-Pilot reported. 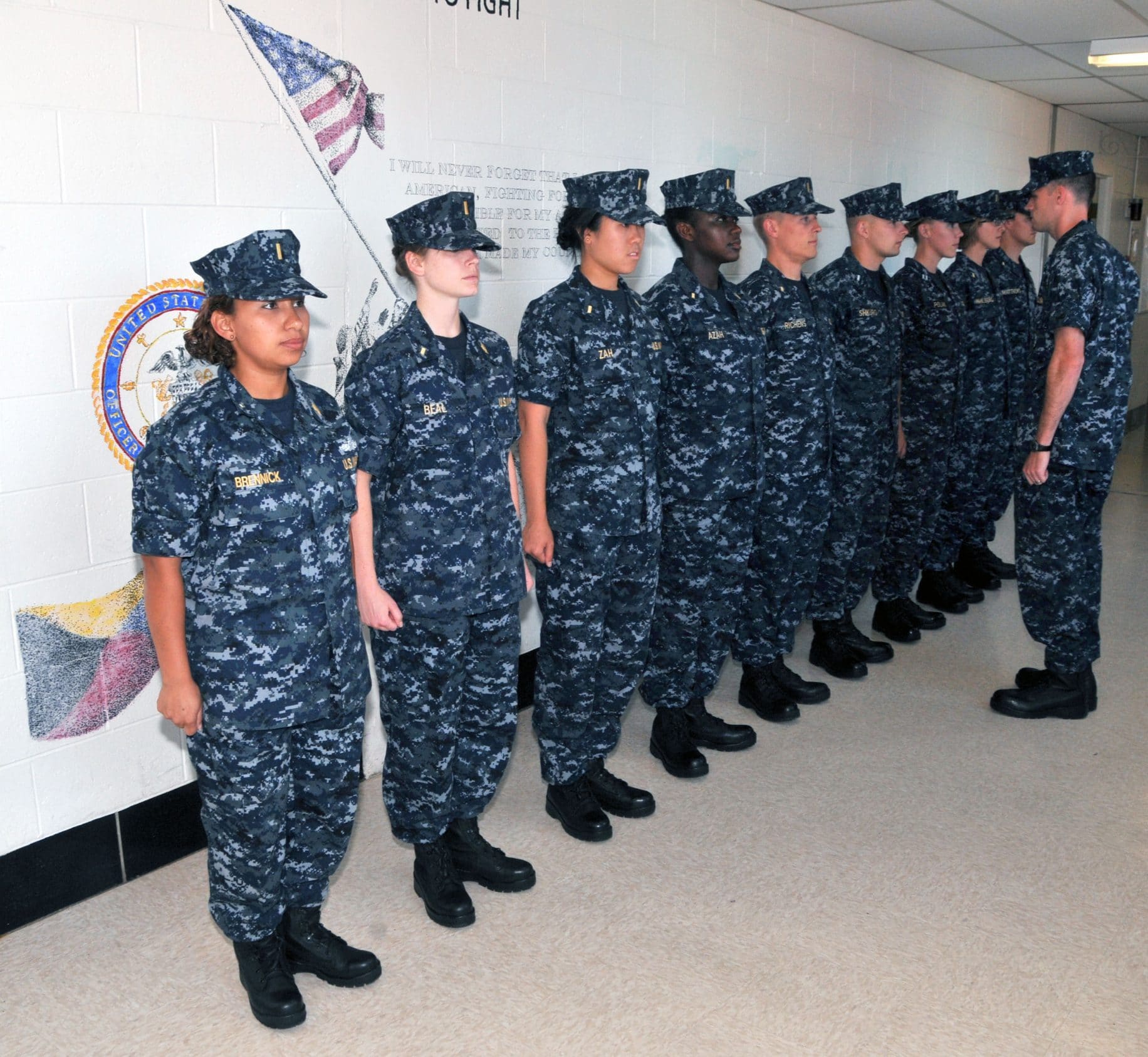 Lt. Alan Dransfield, an Officer Development School student and dental corps officer from Tallahassee, Fla., conducts a pre-graduation inspection of members from his class at Officer Training Command. The school provides staff corps and restricted line officers with the training necessary to prepare them to succeed in their roles as newly commissioned naval officers. (U.S. Navy photo by Scott A. Thornbloom/Released)

Active-duty sailors reportedly received an increase in their annual uniform replacement allowance to facilitate the purchase of their new uniforms, designated as the Navy Working Uniform Type III. 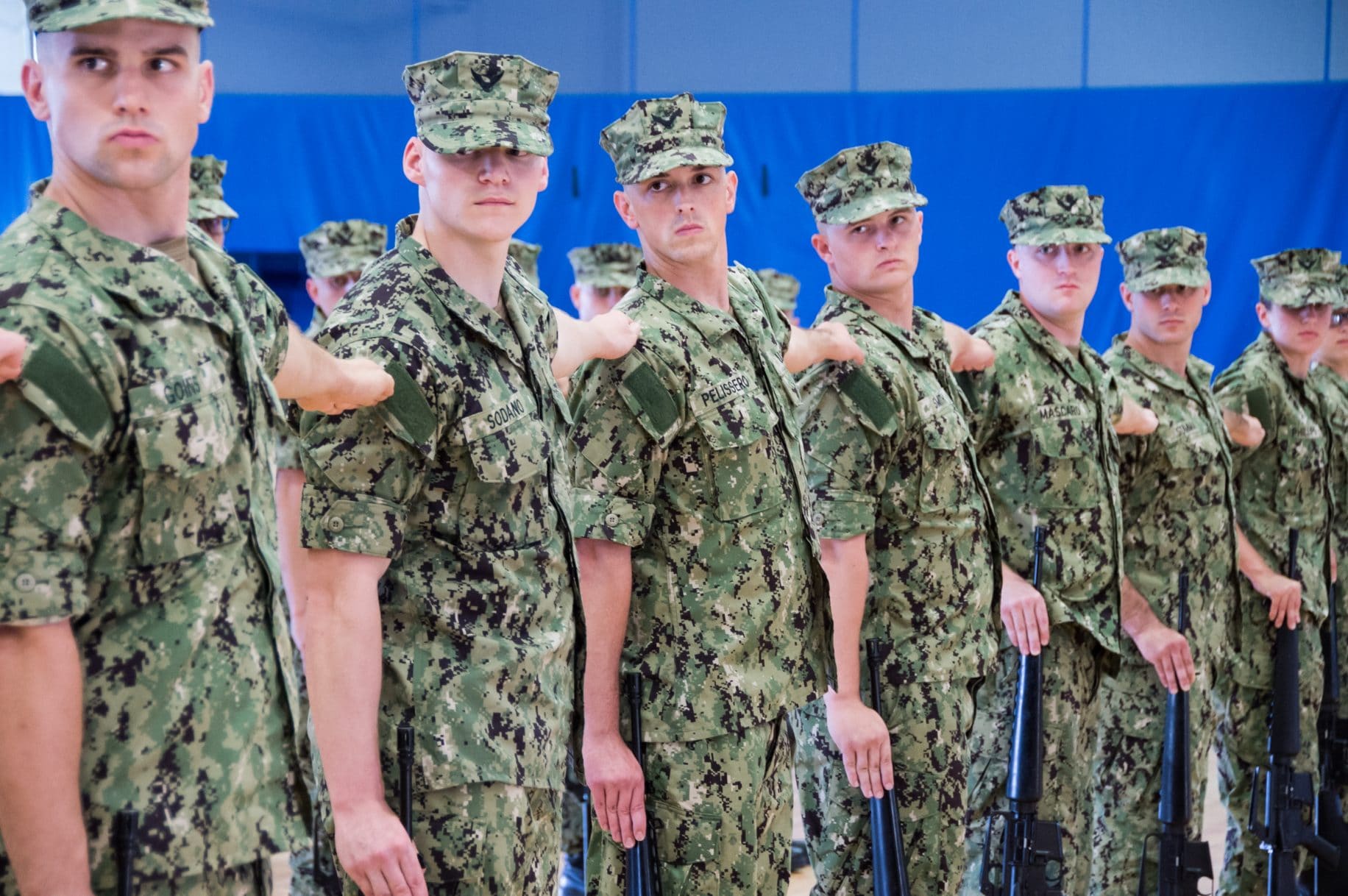 The blue camouflage was designated Navy Working Uniform Type I.

“The NWU Type I pioneered the Navy into the accepted wear of camouflage style uniforms — something that history reflects has been long desired by Sailors,” a U.S. Navy said in a statement obtained by The Virginian-Pilot. “The NWU Type I served its purpose for its era and now the Navy is transitioning forward.”

Along with providing all sailors with the Type III pattern first worn by the Navy SEALs, the Navy is evaluating a variety of additional uniform changes, including female skirts and slacks, more comfortable boots, flame-resistant camouflage, and a maternity white blouse and physical training shirt and shorts.

“We can’t speculate about what will be next, but we continue to review all uniforms and stay abreast of uniform developments by our sister Services and the textile industry,” the Navy statement said.

The Navy has also begun to move away from red “misconduct” stripes on the dress uniforms of senior enlisted sailors. The red stripes of the existing uniform policy were meant to indicate sailors had received nonjudicial punishment or court-martial within the previous 12 years.

The U.S. Air Force has recently adopted two-piece uniforms for aircrews, giving them a pair of pants and blouse, instead of a single-piece jumpsuit like the flight suits worn by aviators. The change reportedly extends the ability of aircrews to use either uniform, depending on which one may be best for a specific set of conditions.

In the past year, the U.S. Army has also begun a phased rollout of uniform changes that give modern Soldiers a dress uniform similar to the “pinks and greens” worn during World War II. The Army is looking at a slower phased roll-out of their new dress uniforms, with uniforms being issued to new Soldiers entering their first units in 2020 and then later on to the rest of the Army within 8 years.