A U.S.S. Manchester, CL-83, hat firmly tucked on his head, John Ronney, pierced the collar of his granddaughter, Jennifer Rooney’s new rank during a special pinning ceremony at Naval Medical Center Camp Lejeune on Sept. 25. By Rooney’s side was his son and Jennifer’s father Robert, a Navy veteran. Together, three Navy veterans brought together for military tradition.

“They are the two people who taught me everything I needed to know about the Navy,” said Jennifer. A Corpsman, at the Wayne Caron Clinic aboard Marine Corps Base Camp Lejeune, Rooney was selected for immediate promotion through the Meritorious Advancement Program (MAP), earning the rank of Hospital Corpsman, Third Class. 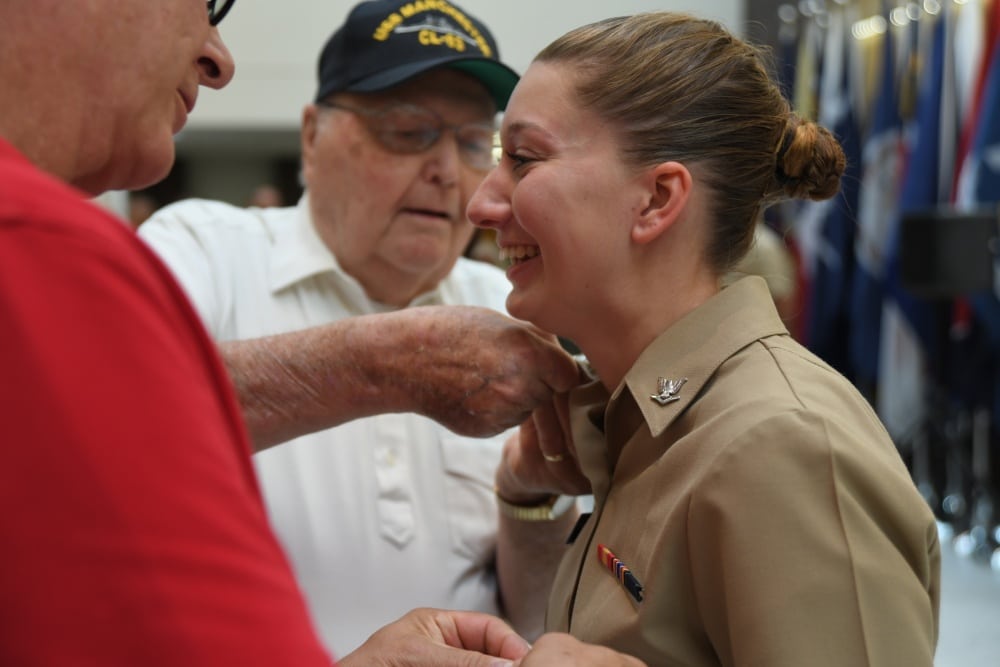 To MAP requires extensive tests on Navy knowledge and overall selection based on commitment to service by the sailor’s peers.

Being pinned by her father, and grandfather, was something Jennifer had anticipated from the moment she began preparing for the advancement exams.

Being a part of Jennifer’s promotion was something neither would have missed.

Jennifer started her Navy career in June 2017, coming to NMCCL in January 2018.

The Navy was not the original plan for Jennifer, who attended college earning a degree in journalism and mass communications.

“I went to college and decided half way it that I wasn’t happy and that I wanted to do something more enjoyable. I wanted to help people in the world. I wanted to become a nurse,” said Jennifer.

With a little encouragement from her dad, Jennifer joined the Navy as a Corpsman.

Her MAP promotion was no surprise to her father and grandfather.

“We’re both very happy for her,” said Robert. “We knew she would be very successful.”

“It makes me very proud to know we have a third generation in the Navy,” said John.

Jennifer hopes to complete the Medical Enlisted Commissioning Program (MECP) to become a nurse within the Nurse Corps.

“Both of my father and grandfather spent a great deal of their enlistments overseas and deployed on ships and that’s exactly what I want to do and that’s what I plan to do,” said Jennifer. “I always feel like I am taken care of and watched out for (in the Navy) and I try to do the same for the other Sailors who work with me.”