Mark Smithwick gives his former Army buddy Pete Fengl a hug after they met for the first time in 50 years. Smithwick and Fengl were stationed in Germany in 1969 and last saw each other when Fengl got orders to Vietnam. [DEVON RAVINE/DAILY NEWS]
October 06, 2019 Jim Thompson - Northwest Florida Daily News
Share
Tweet
Flip

“Yeah, that’s him,” Mark Smithwick said as he spied Pete Fengl walking around the corner to the front door of the Magnolia Grill on Tuesday evening.

As Fengl made his way up the few steps to the door, Smithwick extended his hand, pulling Fengl toward him with a hearty, “Hey, brother!”

They embraced, and with that gesture the 50 years that had passed since the two Army buddies had last seen each other evaporated into the mists of time.

“It’s weird,” both would say a few minutes later, reacting to seeing each other after five decades. Weird or not, the two men quickly launched into stories from the eight months they spent together in Germany in the late 1960s, recalling the Volkswagens they painted and fixed up, the other buddies of whom they’d lost track and some of their decidedly unofficial work activities.

In 1969, Fengl and Smithwick, both of whom had been drafted, were working as sheet metal specialists with the 703rd Maintenance Battalion in Kitzingen, Germany, keeping aircraft and other equipment in working order. But when Fengl got orders for Vietnam after just eight months in Germany, they lost touch. 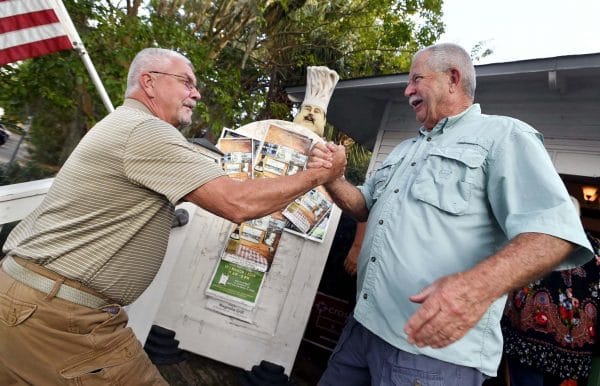 Army veterans Pete Fengl, left, and Mark Smithwick meet again for the first time in 50 years Tuesday evening at the Magnolia Grill in Fort Walton Beach. The two last saw each other when they were stationed in Germany in 1969 and Fengl got orders to Vietnam. [DEVON RAVINE/DAILY NEWS]

Fengl candidly admits that then, headed into the uncertainties of Vietnam, he had more on his mind than Smithwick and the other guys he left behind in Germany.

“That was something you put back into the little spaces of your brain,” Fengl, now 75 years old, said in a telephone interview the day before the reunion. “You move on, but you remember with fondness the friends you have made.”

Fengl’s departure for Vietnam had weighed on Smithwick over the years.

“I didn’t know whether he made it back or not,” Smithwick said.

That question, at least, was answered in a brief telephone conversation about 40 years ago after Smithwick contacted the office of then-Georgia Sen. Herman Talmadge, where staffers tracked down Fengl and passed along a note from Smithwick asking for a phone call. The two men did speak, but then drifted apart again. The phone call was mentioned, but only briefly, before the two men sat down with their wives for dinner.

Like many friendships, Fengl’s and Smithwick’s initial connection was forged in the most mundane of circumstances. For them, it was the camaraderie of a common military tradition — a less than complimentary view of higher-ranking personnel.

“Neither of us liked our first sergeant,” Fengl said. 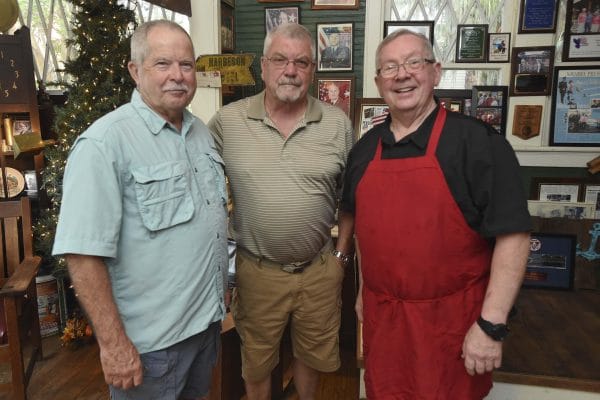 Army veterans Mark Smithwick, left, and Pete Fengl, center, pose for a picture with Magnolia Grill owner Tom Rice. Smithwick and Fengl were stationed in Germany in 1969 and last saw each other when Fengl got orders to Vietnam. The met again for the first time in 50 years at the Magnolia Grill Tuesday evening. [DEVON RAVINE/DAILY NEWS]

And, Fengl admitted, the camaraderie of the military was particularly important for him at that point in his life. In 1967, at the age of 21, and not seeing much of a future for himself in his native United Kingdom, Fengl immigrated to the United States, leaving family and friends behind.

He found work with a couple of General Motors subsidiaries in Indiana but, Fengl said, “It was basically a very lonely year.”

In 1968, a year to the day after he arrived in the United States, Fengl was drafted into the Army, and after stateside training was sent to Germany. It was there that he met Smithwick, a Southern boy who also had been drafted.

“We hit it off right away,” Fengl said. “Sometimes you just meet somebody that’s on the same wavelength as you.”

“We just worked closely together there in Germany,” Smithwick said. “He was a real good guy.”

After Vietnam, Fengl stayed in the Army for the next two decades, flying helicopters, before eventually getting into military contracting work as a test pilot.

Smithwick returned to civilian life and settled in northern Georgia, working for a railroad company in Atlanta before joining the police department in the metropolitan Atlanta community of Roswell. Now 70, Smithwick works as a fishing guide on Carters Lake and Lake Lanier in the north Georgia mountains.

“Peter’s been really looking forward to it,” said his wife, Joanne, as she and Smithwick’s wife, Debbye, waited at the table for their husbands to join them. But at the same time, she said, her husband was “kind of apprehensive” about the reunion.

Debbye Smithwick said her husband had talked a lot about reuniting with Fengl. “He’s never forgotten those times,” she said.

Also at the table Tuesday were the couple who helped bring the two men together, part-year Island Princess condominium residents Ed and Cynthia Henderson.

The Hendersons know both men. They became acquainted with the Fengls in Huntsville, Alabama, where both couples once lived. They’ve gotten to know the Smithwicks during the Smithwicks’ regular visits to the Island Princess.

About this time last year, the Fengls narrowly missed running into the Smithwicks, as their vacation schedules almost coincided.

“We missed them by about a week,” Smithwick said.

The Hendersons, though, didn’t know until recently that Smithwick and Fengl knew each other and that Smithwick had wanted for years to reconnect with Fengl. That all changed with a Facebook post a few months ago from Ed Henderson. Smithwick happened to see it, and scrolling through the comments saw Pete Fengl’s name.

“I said, ‘That’s impossible’,” Smithwick remembered. He sent a text message to Henderson, who got in touch with Fengl. Smithwick and Fengl soon were on the phone.

“I couldn’t stop smiling,” said Smithwick, who caught Fengl while he was in line to get his vehicle tags renewed.

“I forgot all about getting my tags,” Fengl said. He walked outside and the two men began filling in the details of the 50 years gone by.

“There’s no telling” how long the two men were on the phone, Smithwick said.

“I probably wouldn’t have recognized him on the street,” Smithwick continued, but Fengl’s voice was instantly recognizable.

Smithwick’s voice also was instantly recognizable to Fengl. “When I talked to him on the phone that first time, he had the same mannerisms in his voice,” Fengl said.

Subsequently, Ed Henderson arranged the dinner at which the two men would meet face to face. Henderson smiled broadly as the two men met Tuesday evening.

“It reiterated that it’s a small world,” Cynthia Henderson said, “especially when Ed got that text out of the blue.”

As it turns out, it really is a small world for the Smithwicks and the Fengls. The Fengls now live in Athens, Alabama, while the Smithwicks live in Canton, Georgia, just 180 miles apart — close enough for more frequent visits.

And that, Pete Fengl said, is exactly the plan.

“We intend to keep doing it,” he said.