Seventy-four years after the Battle of Iwo Jima during World War II, current service members, veterans, as well as members of the general community frequently remember the impact those soldiers had on history itself.

Through events like Saturday morning’s Iwo Jima Flag Run at Palo Duro Canyon State Park, people can honor those who serve, have served in the military or have made the ultimate sacrifice for their country. Proceeds from the event went to local wounded warriors through the Brothers-Sisters of our Military Adventures organization.

Johnny Cobb and Jack Barnes started the event last year. Cobb said his father was a survivor of the Battle of Iwo Jima, and he wanted to honor him, as well as honor all military members past and present. 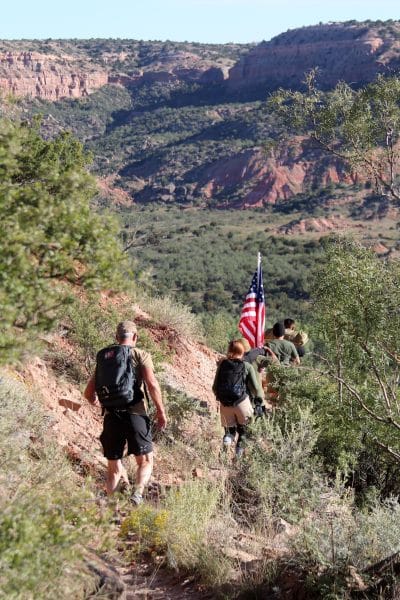 Teams ran up and down the CCC Trail in Palo Duro Canyon carrying American flags to honor those in the Battle of Iwo Jima during World War II during the second annual Iwo Jima Flag Run Saturday morning. [Neil Starkey / For the Amarillo Globe-News/TNS]

The run consists of six-person teams that carry a flag up Palo Duro Canyon and plant it at the top. It is a similar elevation as Mount Suribachi in Japan, where six Marines planted a flag at the end of the Battle of Iwo Jima. The trail route was more than three miles, consisting of going uphill out of the canyon and back down.

Mitchell Savage, a current Marine, met teams at the top of the canyon and saluted them as the flag exchange was made.

“The raising of the flag at Iwo Jima showed the resilience of the American people and what they are willing to do to fight for what they believe in,” he said. “This exchange is going to represent something very similar. They are going to have to go through this terrain and make it up there and raise the flag they are carrying in remembrance of those people at Iwo Jima.”

Shortly after last year’s event, Barnes died. Cobb said he was one of the most patriotic Americans Amarillo ever had, and last year’s run was the last event he participated in.

It was emotional for Cobb to host the run this year. He said at first, he was not sure if he wanted it to continue without Barnes. 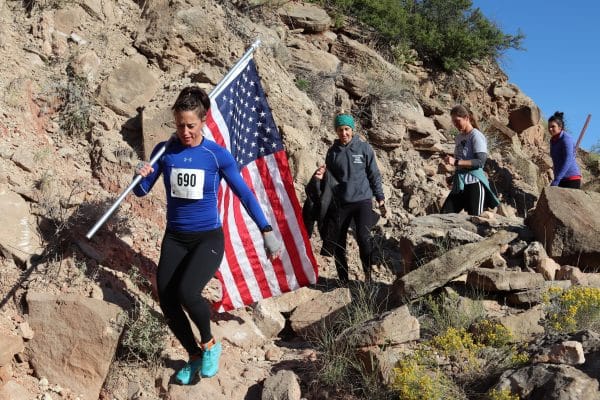 Stephanie Stample carries the American flag for her team, the Fitlers, down the CCC Trail in Palo Duro Canyon during the annual Iwo Jima Flag Run Saturday morning. [Neil Starkey / For the Amarillo Globe-News/TNS]

“I was pretty devastated after we lost him,” Cobb said. “But then I got to thinking, ‘No, I have to do it again in his honor, as much as anybody else’s.’ “

“(Barnes) had a major impact not just on the Amarillo area but on us as individuals, the service members who are here in Amarillo,” Savage said. “He really went out of his way to influence us. We want to do this in memory of him.”

Prior to starting this event, Cobb was the wrestling coach at Tascosa High School. Through his 30-year career as a teacher and coach, he said it was important to remind his students of the sacrifice those service members had made for the freedom they enjoy every day.

Joe Stafford, the current wrestling coach for the high school, brought six team members out to the event to participate. This event is a good physical test for the students, as well as an opportunity to build team comradery. But Stafford said he wants to continue Cobb’s message.

“Anytime I can remind these younger kids of the sacrifice of the military men and women who have come before us,” Stafford said. “I think these kids sometimes get a bit detached and (do not) always understand what price other people had to pay to make this available to us. It’s a great place we live in.”

Lt. Col. Eric Strong, a current active duty member of the Marine Corps, said events like this are important for younger people, to interact with those who have served and learn from them. They get the chance to see the relationship and the brotherhood up close.

Sgt. Isaiah Clark, a seven-year member of the Marine Corps, said this kind of event educates those about the importance of what the military did in these kinds of conflicts. As a Marine, Clark has a sense of pride in belonging to something greater than himself and being able to give back and represent his community.

“History repeats itself,” he said. “Also, many men and women have lost their lives for the service of freedom. Many Americans do not know what the cost of freedom is, and Marines do. … Stuff like this isn’t really taught in school. There are some movies and some history about it, but it’s not the biggest thing taught in history. There are some people who would love to know about it, but who don’t.”

Strong said it means a lot to him that members of the community came to support the military at this event.

“The folks who are here right now have relationships with military members or have in the past,” he said. “They want to come out and support, and that’s what makes us feel good, knowing that what we do is (important).”

Stafford said he thinks Amarillo is a community that supports military veterans, as well as those currently in active duty.

“This is a place where we recognize them,” he said. “It’s not an easy thing to do to serve your country, not really knowing what that means when you sign up. We appreciate them and, hopefully, they get that communication through events like this.”

Cobb said the goal is for this event to happen each year. It is important to continually remember the impact the military makes on daily life.

“We’ve got so many Americans sacrificing the ultimate sacrifice for us to still continue to have the freedom that we have,” he said.