Paul takes discarded fire hoses, paints them into American flags and sells them. He has had the hobby for several years.

“I love my country, man,” Paul said while at the fire station on Hutchison Boulevard. “I love my city. I love my department. It’s a statement of pride. A lot of people have fought and died for the freedoms we have, so it’s a paying-homage kind of thing.” 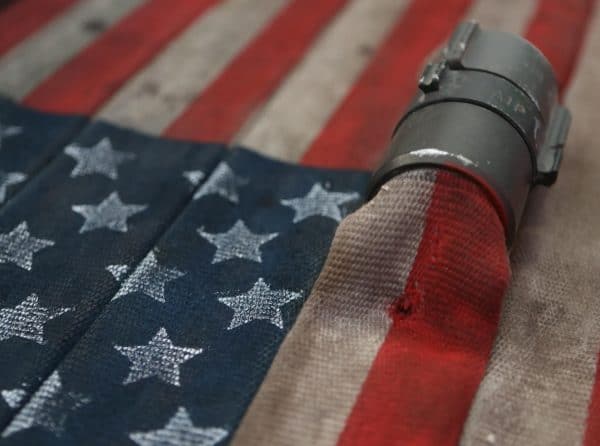 It usually takes him a couple of hours to make the flags. He gets out-of-service hoses from departments around the area, rolls them out, cleans them up, lets them hang out in the sun for a few days and then spray-paints the stars and stripes. The frame usually takes the most time.

His hobby is attracting national attention and he’s shipped the flags down to Mexico. In comments on one Facebook post by Paul advertising a flag, people asked about and complimented his work.

“It came out of a need to provide,” said Paul, who used to work at the Callaway Fire Department. “At the time I was working about four jobs to make it work. This was one of them. It started out like I was just giving them away. I didn’t think anybody would really want them until somebody convinced me to start trying to sell them.”

Paul likes to stay creative and busy. He sells the flags through word of mouth and said his phone “has just exploded” after news reports on his hobby.

“Now people are messaging me on Facebook and finding me and stuff,” Paul said.