Whenever Ed Reeves has looked at the Vietnam Veterans Memorial in Washington, D.C., he has focused on the panels containing the names of those who died on Sept. 12, 1970, and Feb. 14, 1971.

It was on those days, Reeves said, that were it not for his dog, Prince, “My name would be on that wall.”

Instead, nearly 50 years later, the Grove City resident visited a different wall Saturday at Motts Military Museum in Groveport, a southwest suburb of Columbus, for the dedication of the Vietnam War Dog Team Memorial.

Its three black granite panels are inscribed with the names of 4,244 dogs that served during the war, as well as the numbers that were tattooed inside each of their ears. Also listed are the 297 dog handlers, one veterinarian and two vet technicians who died in Vietnam.

The panels surround a life-sized bronze sculpture modeled after Prince and Reeves, who was among the approximately 10,000 men who served as dog handlers in Vietnam.

Inscribed on the center panel of the memorial are the words, “The Unbreakable Bond.” 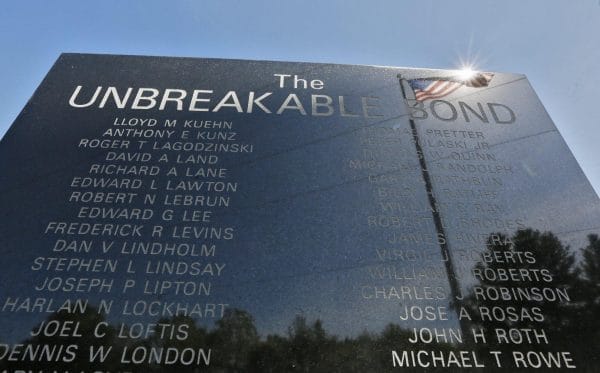 The Vietnam War Dog Memorial was dedicated Saturday at Motts Military Museum in Groveport. The memorial includes the names of 4,244 dogs who served, as well as the nearly 300 dog handlers who died in Vietnam. [Eric Albrecht/Dispatch]

The total cost of the memorial was $110,000. The three panels were designed and constructed by Columbus Art Memorial, using granite from the same area in India that produced the stone for the Vietnam Memorial in Washington. The sculpture was created by noted Zanesville sculptor Alan Cottrill.

Decades later, Reeves and other handlers — including Tom King of Hamilton Township, Franklin County — still struggle to control their emotions when discussing their combat buddies.

“We went through a lot together,” said King, 73, his voice cracking at the memory of his dog, Fritz. “The only things that held me together were my letters from home and playing with Fritz.”

Adding to the emotion is the fact that while Reeves and King finished their tours and came home, their dogs stayed behind.

After working with new handlers, most Vietnam war dogs that survived combat either were euthanized or given to the South Vietnamese Army, according to the U.S. War Dog Association, based in New Jersey. Only about 200 returned to the United States.

“Our group formed because there was a lot of guilt from the dog handlers that survived (the war),” said Ernie Ayala, vice president of the Vietnam Dog Handler Association, incorporated in California. “The dogs saved our lives, and that’s what they get? They stayed there and we got to go home.”

Reeves, 69, has been a volunteer at Motts Military Museum since 2012. He spent years investigating the fate of his dog, Prince, and wrote a book about it that was self-published in 2016. That prompted Lori Motts-Byrd, the museum’s assistant director, to start raising funds for a memorial. A $50,000 grant from the Ohio Facilities Construction Commission was instrumental, she said, as well as private donations.

“From talking to Ed and finding out more about what the dogs did, I thought, `Something has to be done. People have to know about this,'” Motts-Byrd said.

Dogs have been used for military purposes since ancient times, but it wasn’t until World War II that the U.S. government authorized specialized training for dogs to serve as scouts and sentries, among other duties.

The war dog association estimates that 4,900 dogs — mostly German shepherds, like Prince and Fritz — served during the Vietnam War, but incomplete records were kept in the war’s early years.

In 1966, King was a military policeman stationed at Lockbourne Air Force Base (now Rickenbacker Air National Guard Base) in Columbus when he was “volunteered” by a commanding officer to become a dog handler. Fritz trained with King as a sentry dog — dogs that generally were not used in combat, but to guard perimeters of bases.

King and Fritz arrived in Vietnam in January 1967. Though there was often gunfire and shelling heard near their base at Tuy Hoa, King said he and Fritz never faced mortal danger together.

“He loved working and loved when I took him to swim in the South China Sea,” King said.

Reeves, who grew up a dog-lover, volunteered to be a dog handler after he was drafted into the Army in 1969. He was paired with Prince, who was trained as a scout dog, used to go out on patrol and detect people as well as mines and booby traps.

On Sept. 12, 1970 — the first day “in country” for the duo — Prince alerted Reeves’ unit of activity nearby. That “allowed us to get the jump on them rather than them on us,” said Reeves, who narrowly survived the resulting firefight.

On Valentine’s Day 1971, Prince and Reeves were scouting a trail for a platoon when Reeves saw the dog go around a small tree that was lying across the trail. He called Prince back, and the dog again went around it. Reeves looked for signs of a mine, and finding none, started to step over the tree.

“Prince came up underneath me and his nose stopped dead on the ground,” Reeves said. “Luckily, I pulled my foot back.”

They searched the spot more closely and found a small mound of dirt which was hiding an unexploded American mortar shell rigged up as a mine.

After Reeves came home, “I followed the news and wondered every day, `What’s he (Prince) doing? Is he still alive?'” he said, pausing to control his emotions. “Then the stories came out about how the dogs were treated over there.”

Ayala said the dogs who were euthanized either were ill or deemed too aggressive. Most of the dogs in good condition were given to the Vietnamese.

In the mid-2000s, a group organizing to build a war-dog monument came upon a vast trove of military dog records at Lackland Air Force Base in San Antonio, Texas. Reeves and King were able to get their dogs’ records.

King found out that Fritz had been euthanized. In 2009, he also connected with the family in Ogden, Utah, that had donated Fritz to the military.

Starting in 2006, Reeves embarked on a long journey, first tracking down the Minnesota family that had donated Prince, and then discovering that Prince had been one of the few war dogs that had returned to the United States.

One of the kennel’s owners told him Prince had retired in 1978 and lived to the ripe old age of 15. That thrilled Reeves.

“The only thing that would have made me happier is if I got to take him home with me,” he said.