Fourteen years after Navy SEAL Lt. Michael P. Murphy sacrificed himself while attempting to save his fellow troops during Operation Red Wings, a new museum has been unveiled in his honor.

Set to open in May, the LT Michael P. Murphy Navy SEAL Museum held a ribbon-cutting and sign unveiling ceremony on Tuesday in West Sayville, Long Island, N.Y., concluding years of development to finally reveal the state-of-the-art museum that is only the second-ever – and first in the northeast – museum dedicated to Navy Special Warfare Operators. 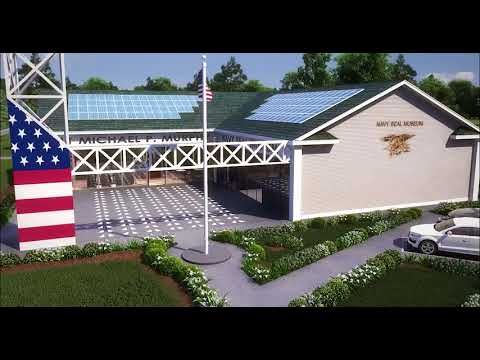 Michael Murphy’s father, Daniel Murphy, said it was his vision to have a Navy SEAL museum in New York – not a museum to his son.

Michael Murphy was one of 19 U.S. service members who were killed in Afghanistan on June 28, 2005. He was killed after intentionally entering enemy fire to reach radio signal and make the call for backup during an ambush in the mountains of Kunar province, all while shooting on his enemies until he succumbed to his wounds. He was posthumously awarded the Medal of Honor.

“Anyone who knew Michael knew that he was a team player beginning to end,” he said. “While the museum will carry Michael’s name, the museum itself will carry the spirit of all Naval Special Warfare Operators.”

The centerpiece of the museum – which Daniel Murphy described as the most important element – is the interactive memorial wall containing 302 names of Navy SEALs and underwater demolition team members killed in combat, each of which spectators will be able to learn more about using their phones.

Some of the museum’s exhibits include topographical models of the battles during Operation Red Wings, a virtual world map and a virtual book of all Basic Underwater Demolition/SEAL (BUD/S) class graduates, a military rank display, a children’s submarine ride, a store, a small film exhibit, and more.

“This Museum will bring to life the unique and extraordinary young men who serve as Special Operators and Navy SEALs and their stories of service and sacrifice in keeping all Americans safe and secure,” Daniel Murphy said.

Additional Gold Star families will be able to buy additional trees and plaques in their fallen service member’s honor. A concrete pathway is lined by legacy bricks, which anyone may purchase to honor their loved ones.

The museum will also include a training center for the “Lt. Michael P. Murphy Division” Sea Cadet unit, complete with a grinder – a paved area with painted flippers where aspiring Navy SEALs complete their workouts during BUD/S.

The grand opening is expected to be held in the spring, and Murphy said they’re aiming for May 7 – Michael Murphy’s birthday. It’s the same date that the USS Michael Murphy was christened, and the same date a memorial park and post office in his hometown of Patchogue, N.Y. were named for him.

A fundraising gala will be held on March 25, 2020 with special guests retired Admiral William McRaven and actor Taylor Kitch who played Michael Murphy in the Lone Survivor film, along with several other surprise guests.

Above all else, the one thing Daniel Murphy hopes people learn from the museum — “the cost of their freedom.”