The CJCS is the nation’s highest-ranking military officer, and the principal military advisor to the President, Secretary of Defense, and National Security Council. 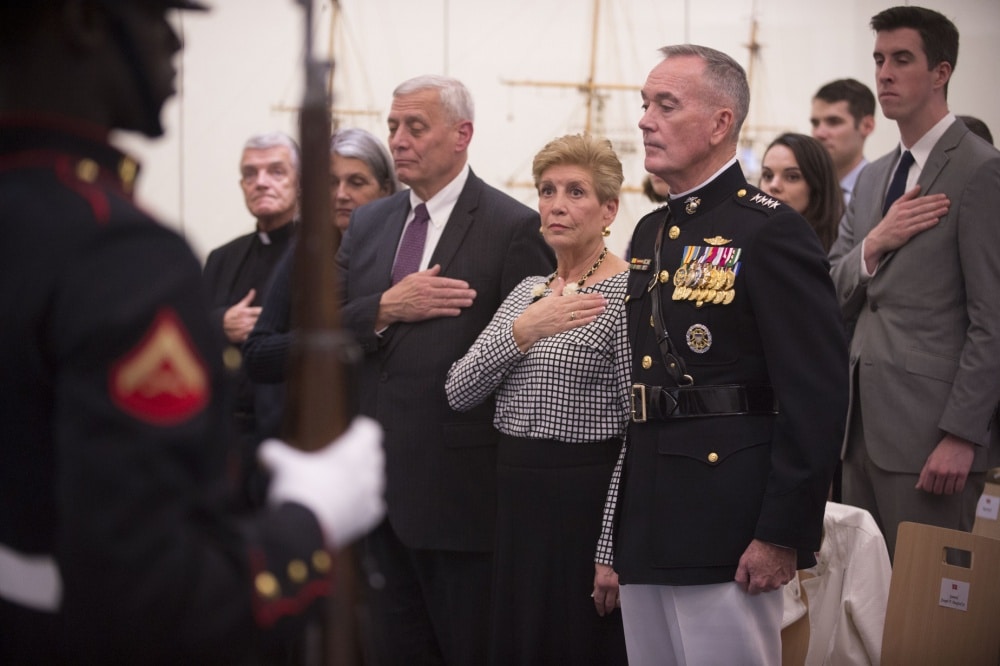 Nineteenth Chairman of the Joint Chiefs of Staff (CJCS) Marine Gen. Joseph F. Dunford Jr. retires from military service in the USS Constitution Museum with ceremonial support from USS Constitution’s crew. Prior to becoming Chairman, General Dunford served as the 36th Commandant of the Marine Corps, and he has served 42 years in the military. (U.S. Navy photo by Chief Mass Communication Specialist Elliott Fabrizio)

Prior to becoming Chairman, Dunford served as the 36th Commandant of the Marine Corps, and he has served 42 years in the military.

The Naval Act of 1794 mandated the ship’s original crew include 50 Marines, and the line in the Marine Corps’ hymn “… to the shores of Tripoli…” comes from the Barbary War, where USS Constitution’s Navy and Marine Corps team fought together over land and sea to secure peace.

Additionally, Brig. Gen. Archibald Henderson, the U.S. Marine Corps 5th Commandant (nicknamed the ‘Grand Old Man of the Marine Corps’), served aboard USS Constitution during the battle with HMS Cyane and HMS Levant. He was decorated for bravery and gallantry in battle during the War of 1812.

USS Constitution is designated America’s Ship of State, and her active-duty Navy crew engage in community outreach and education about the Navy’s history and the importance of naval power to more than 500,000 visitors each year.

This report originally published at dvidshub.net (DVIDS) and is reprinted in accordance with DVIDS guidelines and copyright guidance.