On May 10, he left Germantown, Maryland. He traveled alone, meeting veterans and their families along the way and sleeping in a camper that he pulled behind the tractor. On the road, people flagged him down to leave a donation or to talk about their family’s experience in the military. 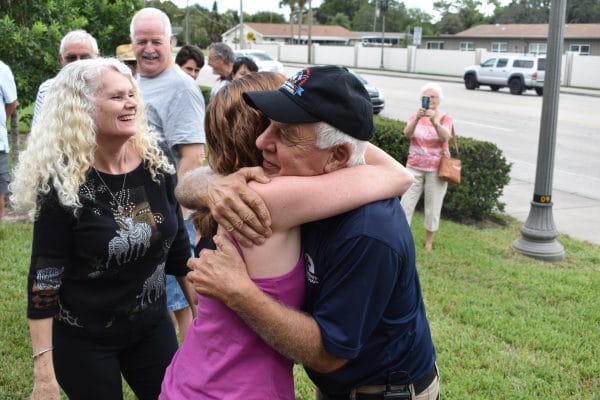 Stephanie Francis, left, and Stephanie Mahoney, center, greet their close friend Ivan Stoltzfus on Saturday after he returned to Sarasota from a cross-country trek in a tractor. [Herald-Tribune staff photo / Anna Bryson]

Stoltzfus isn’t a veteran, but he’s devoted to the cause.

“I always felt like I took my freedom for granted and I wanted to do my part,” he said. “I’ve seen so many veterans come back into civil life, and just really struggle. I want to do something on my part to help bring awareness to the PTSD of veterans and first responders.”

Before Stoltzfus began his journey, his friend Jeremy Jackson gave him a gift to take with him on the road. 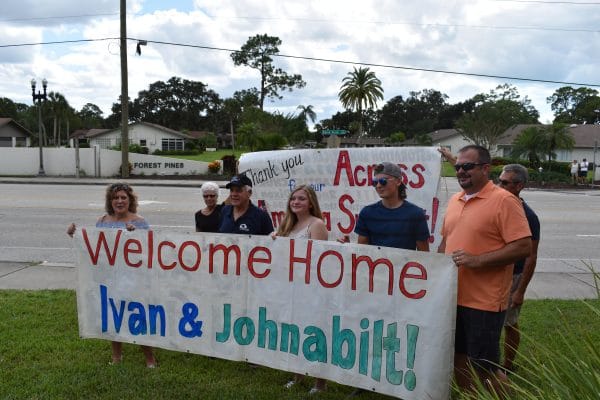 Friends greet Ivan Stoltzfus as he returned to Sarasota after his almost 6,000-mile journey across the United States in his tractor. [Herald-Tribune staff photo / Anna Bryson]

“He handed me a little box, I opened it up, and it had a purple heart in it,” he said. “I said, ‘Jeremy, I can’t take that, you earned it.’ With tears in his eyes, he said, ‘I want you to take that with you.’ I’ve been carrying it with me ever since.”

Operation Second Chance is headquartered in Germantown, Maryland, and has a strong presence in Sarasota. It was founded in 2014 by Cindy McGrew. Three of her brothers served in Vietnam, and died in the past five years.

“I saw them self-medicate when I came home, I saw how they retreated from that war,” McGrew said. “And I vowed at that time that I was not going to let that happen to future veterans. … I thought that if I couldn’t be there for my son or my daughter, I hope somebody would.”