While James has often been outspoken about social justice issues, during a Monday press engagement he instead criticized Houston Rockets general manager Daryl Morey’s comments in favor of Hong Kong pro-freedom protesters. Capitalizing on James’ comments, Barstool Sports began selling a t-shirt on their website which includes a depiction of James’ as a Communist Chinese propaganda figure and includes the words “Fuck Daryl Morey” in Chinese text.

“Fresh off the presses!  For all you Lebron fans who want to crush freedom of speech and oppress the masses we got a Pro Lebron/Pro China/Pro Communism tshirt for you,” the blog post read.

Along with the depiction of James as a propaganda figure for Communist China, the blog also unveiled a second shirt emblazoned with a 2018 tweet from James reading, “Injustice anywhere is a threat to justice everywhere – our lives begin to end the day we become silent about things that matter.”

“For all you silly human rights activists we have something for you too,” the blog post read, explaining the second tshirt. “After all I’ve always said both blue states and red states buy tshirts. Well the same is true for Democracies and Socialist States.  And let’s not forget that just a few short months ago Lebron was very pro freedom of speech. So we also launched The Lebron Civil Rights tshirt. This way you can wake up every morning and decide whether you want to be a capitalist or a communist depending on how it effects your bank account just like Bron Bron does.” 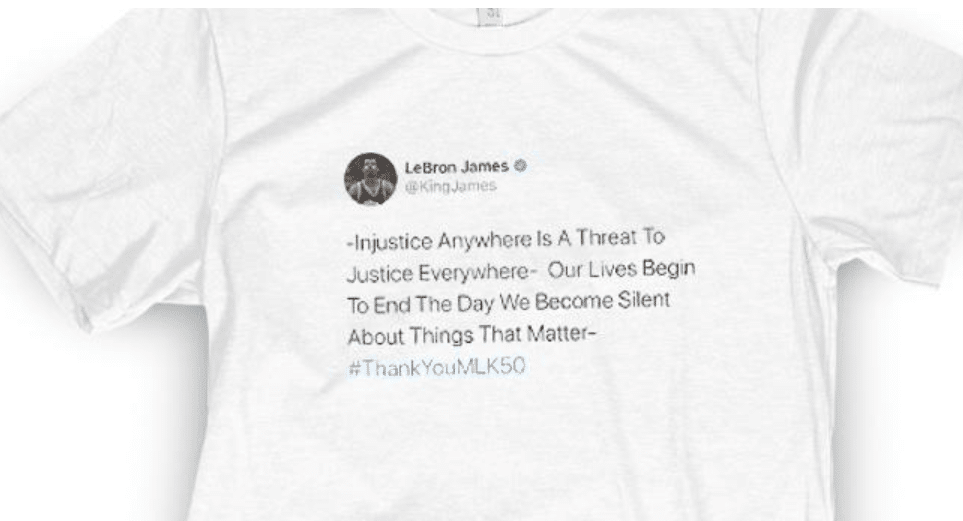 The comments appeared to poke fun at comments by James in which the basketball player said his criticism of Morey was not about the substance of the tweet itself, which caused offense to Chinese censors, but rather focused on the ramifications of the tweet.

Let me clear up the confusion. I do not believe there was any consideration for the consequences and ramifications of the tweet. I’m not discussing the substance. Others can talk About that.

During his Monday press comments, James said “so many people could have been harmed, not only financially, but physically, emotionally, spiritually” by Morey’s tweet in support of Hong Kong protesters.

My team and this league just went through a difficult week. I think people need to understand what a tweet or statement can do to others. And I believe nobody stopped and considered what would happen. Could have waited a week to send it.

James went on to say Morey’s comments “could have waited a week.” Indeed the NBA received backlash from China over Morey’s comments, including a decision by Chinese broadcasters to pull an exhibition game between the Brooklyn Nets and James’ team, the Los Angeles Lakers.

Both the communist China t-shirt and t-shirt showing James’ hypocritical 2018 tweet are available for sale on Barstool Sports’ online shop.