A stray bullet cost a Philly rugby star his Army dreams. Then the brass read his story

The man on the phone told Quiana Boston that he had run the Army for President Obama. And that he’d like to try to help her son achieve his dream.

Boston was hopeful, but cautious. Her son, Nasair Boston-Epps, had already lost so much. A star player on his rugby team in North Philadelphia, the Nomads, and a standout cadet at the Philadelphia Military Academy, Nasair was shot last year on his way to his after-school job at McDonald’s. It was a stray bullet, and it nearly killed him.

It nearly killed his dream, too: of becoming a physical therapist in the Army, following his grandfather and great-great-grandfather, Vietnam and World War II vets, and his father, a Navy veteran of the Gulf War. But, after a grueling fight to get his strength back and return to the rugby pitch, the gregarious kid built like a tank was rejected when he tried to join the Army. 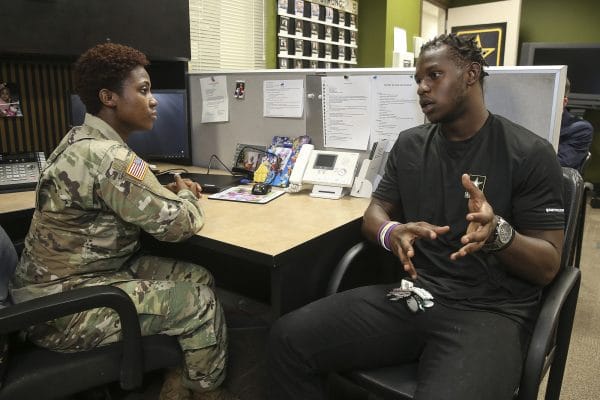 Philadelphia rugby star Nasair Boston-Epps was denied entry to the Army for an old stray bullet wound. The former secretary of the army read an Inquirer column about him and got him approved. On Wednesday, Sept. 18, 2019, Boston-Epps meets with his recruiter Quoya Dubose at the recruiters office in North Philadelphia. (Steven M. Falk/The Philadelphia Inquirer/TNS)

They said the wounds from the bullet were disqualifying — a snap decision that surprised his doctors, teachers, and recruiters, who all knew that Nasair had recovered fully.

Even after he was rejected, Nasair kept showing up at the recruiting station, talking with his recruiter, Staff Sgt. Quoya Debose. The two had built a bond. Debose grew up in the projects in Troy, Ala., and came to Philly two years ago. She had never seen a place like this — where so many of the young people who walk into her recruiting station on Broad Street across from Temple University have already lost loved ones to gun violence. Some of her recruits have found out friends have been killed while sitting in her office.

The staff sergeant was forced to confront, early, the reality of kids growing up in neighborhoods more dangerous than the places they might be deployed.

“They want to get away from Philadelphia — they feel there’s nothing here for them — and they’re afraid that if they don’t leave, they’ll die like their friends,” she said. 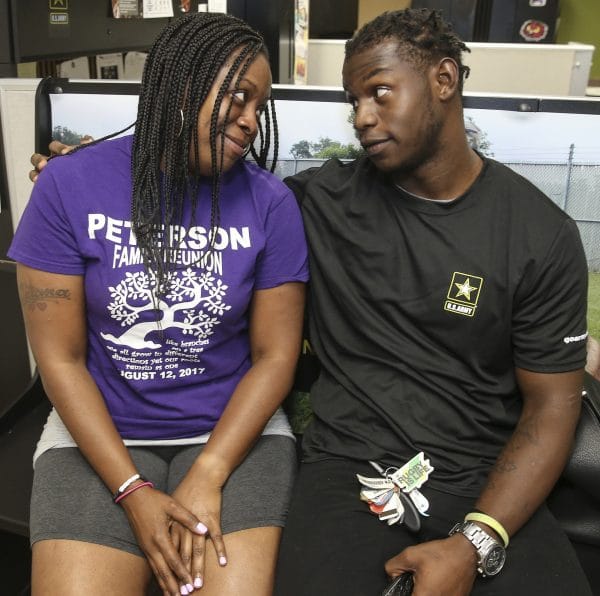 Philadelphia rugby star Nasair Boston-Epps was denied entry to the Army for an old stray bullet wound. The former secretary of the army read an Inquirer column about him and got him approved. Boston-Epps meets with his mother Quiana Boston at the recruiters office in North Philadelphia on Wednesday, Sept. 18, 2019. (Steven M. Falk/The Philadelphia Inquirer/TNS)

That was something Boston, a 41-year-old Amtrak customer service rep, would move heaven, earth, and the Army high command to prevent.

And now she was on the phone with the man who said he’d worked for Obama. Patrick Murphy was appointed undersecretary of the Army under Obama, and then served as the acting secretary, the Army’s highest civilian position. In other words, he had run the Army.

A Northeast Philly native, he was also the first Iraq War veteran elected to Congress. He now holds a distinguished chair at West Point. And he had read the column about Nasair, and saw his potential.

“The Army’s a meritocracy, and we need people to be the next generation of leaders,” Murphy said. He thought Nasair, with his indefatigable will, could be one.

So he sent some flares out to Ken Wong, a Philadelphia civilian aide to the secretary of the Army, and Gen. Frank Muth, head of recruiting for the Army. The entire Army.

Here was a file worth giving a second look, Murphy told them. And they did.

Nasair’s phone rang. It was Dubose. “You’re in,” she told him.

“That’s not a good game to play with me,” Nasair replied. But Dubose wasn’t playing any games.

At the recruiting station, she was explaining the next steps: boot camp, job training, college courses on physical therapy, and eventually a position as an officer, if he completed his education. He would be going to school, to learn how to lead others.

This wasn’t a case of pulling strings, the brass said. But of fixing a mistake.

Yes, doctors took a second look and realized Nasair was fit, said Lt. Col. Brendan Toolan, commander of the Mid-Atlantic Recruiting Battalion. But it was his grit that did it.

“This is exactly the type of person we are looking for in the United States Army,” said Toolan. “This is a kid who had a goal of joining the military and made it happen, and a lot of it was sheer determination.”

Boston had to run out of her office to cry when she found out her son’s news. “I can’t wait to see him in a uniform,” she said. Nasair seemed to hardly believe it on Wednesday. But slowly, it was sinking in. He was looking forward to getting away from the sound of cop cars and helicopters flying over his neighborhood.

He had asked the staff sergeant what he would be called. Cadet, maybe? Private, she replied.

“Private Boston-Epps,” he said aloud, with pride. Then he said it again.