William Barnes' family stands outside the VFW post named in his honor, with the Purple Heart he was awarded with for his service. [Purple Hearts Reunited/Special to The Gazette/TNS]
September 03, 2019 Adam Lawson - Gaston Gazette
Share
Tweet
Flip

An envelope sent without a return address contained something special for the family of a Gaston County, N.C. service member.

William Julian Barnes’ four children were born after he returned from World War II. They knew the Marine was shot three times in the Pacific, and that he’d been awarded a Purple Heart.

They knew he cherished his military service, and founded the VFW in the Paw Creek area of Charlotte that still bears his name. 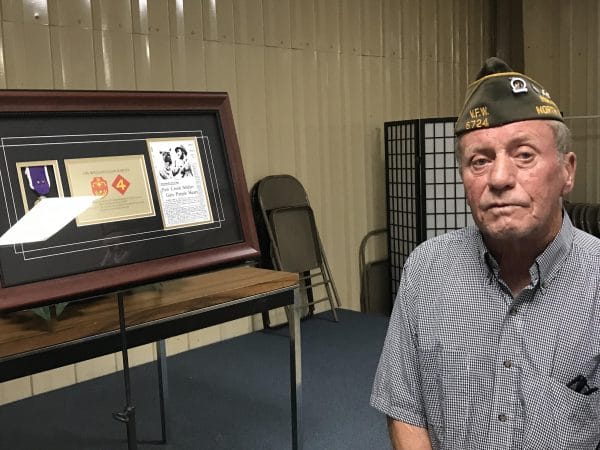 William Julian Barnes Jr. stands with the Purple Heart given in his father’s honor at a ceremony in the Paw Creek area of Charlotte last week. [Adam Lawson/The Gaston Gazette/TNS]

Barnes died in Dallas in November 2006, but his family still didn’t know he was missing his Purple Heart medal until it came anonymously to the Purple Hearts Reunited headquarters in Vermont in July.

The group presented Barnes’ family with his Purple Heart in a frame at a ceremony at the VFW in August.

“I knew that he had said he thought he had given it to a grandchild years ago,” said his daughter, Nancy Lawson. “It’s a great memory, a great honor to have something like this.”

Barnes’s son credited his father with his own desire to join the military, albeit with the Navy. 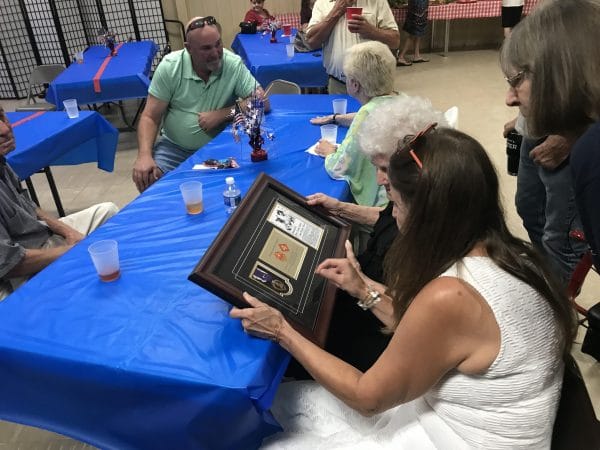 William Julian Barnes’ family looks at the Purple Heart given in his honor at a ceremony in the Paw Creek area of Charlotte last week. [Adam Lawson/The Gaston Gazette/TNS]

“My father was a man among men,” William Barnes Jr. said. “He was the John Wayne in my life. He was a war hero.”

While many men waited for the draft to join the war, Julian Barnes spent his 18th birthday on the battlefield, his son said.

“Joining the military is a patriotic thing,” Barnes Jr. said. “I could’ve either ran to Canada or I could’ve marched to China, any way you want to look at it. A lot of people didn’t believe in war. My dad believed in doing the patriotic thing.”

Barnes was shot in the shoulder, leg and back. When he returned from war, he traveled west selling Bibles out of a truck with his brother, Barnes Jr. said.

Barnes married and had four children. He died from complications of Parkinson’s at 82.

His Purple Heart was the second given to the family of a Gaston County service member by Purple Hearts Reunited recently. Someone found James Willard Arrowood’s at a pawn shop in Omaha and sent it to the organization.