A Virginia woman was arrested last week after she set fire to an American flag hanging from an Arlington overpass to pay tribute to 9/11 victims.

Kayla Caniff, 22, was charged with destruction of property after an Arlington police officer saw an American flag burning just before midnight, Thursday evening. Caniff is accused of burning the flag, which was affixed to a fence on the overpass of N. Stafford Street, north of Ballston, according to reporting by NBC Washington.

The flag was one of many flags that had been situated along the overpass, preparing to honor those who lost their lives on 9/11.

Caniff was arrested on one count of destruction of property and released on her own recognizance.

Following the Thursday incident involving Caniff, the Arlington County Fire Department added 16 more flags across the I-66 overpass, in honor of the 9/11 victims, according to Fox News. The fire department also placed a sprawling flag at the Fire Training Academy.

Maria Arif, 39, another Virginia woman was arrested in a similar event, on August 26, after several flags hanging from private residences in Annandale and Falls Church where removed and damaged.

Arif was accused of ripping the flags down from the private residences and destroying them.

“The victims started contacting the police after a large number of flags over the course of a few days were being vandalized in the neighborhood,” Fairfax County Police Department spokesman Trevor Steranko said, according to Virginia radio station WMAL’s reporting on the incident.

“The neighborhood had come together and pretty much identified her and when police were in the neighborhood, the community was able to point her out,” Steranko said.

Arif was later released on bond.

Another flag burning incident in Virginia has led to an arrest in recent months. On July 4, Mitchell Lee Stauffer, 23, was arrested for torching an American flag in the parking lot of a Walmart in York County. 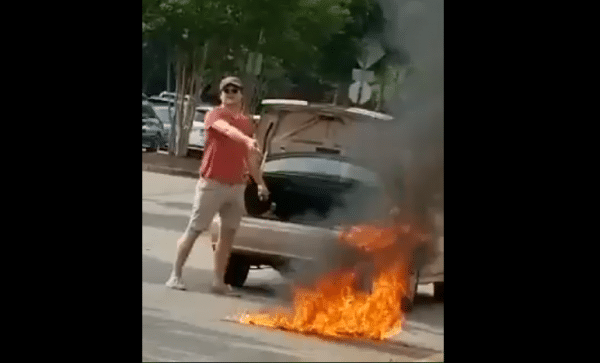 Stauffer was caught on cellphone video as he threw a flag onto the ground, poured gasoline on it and set it ablaze.

Stauffer then fled the scene in his vehicle, but bystanders were able to retrieve his license plate number, leading to his arrest.

He was charged with burning an object in a public place with the intent to intimidate.

York-Poquoson Sheriff J.D. “Danny” Diggs said, “The burning of our great American Flag is very offensive to most people including me. That being said, the courts have ruled that act alone is an expression of free speech and not per se illegal.”

Under the First Amendment, Stauffer is legally allowed to burn the flag, if he so chooses, but was arrested for doing it in a public place to intimidate other persons. If convicted, he could face up to five years in prison.