Navy Senior Chief Michael Forjan set the groundwork for the ruse weeks ago, when he learned he would get a two-week leave to head home from his deployment in Iraq.

He told his wife, Kirsten, he would be be home in mid-September after deploying in April. Then they told his parents.

But that’s where the news stopped — not reaching his four children until he surprised them at their schools in emotional reunions Tuesday morning.

Dressed sharply in his uniform, he made a tour of the Wellington schools attended by his sandy-haired crew, popping into a media room, a gymnasium and, finally, a cafeteria packed with rowdy middle-schoolers.

First to be surprised were his youngest sons, 5-year-old, chubby-cheeked Logan and 9-year-old, bespectacled Christian at Panther Run Elementary School. The boys sat stone-still with looks of shock as their father walked into a room that quickly filled with applause. 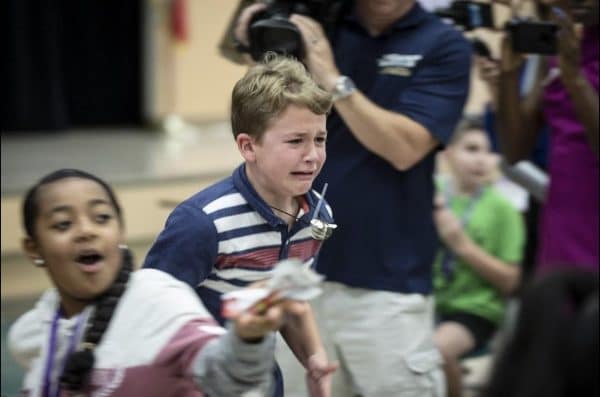 Gabriel Forjan, 11, a sixth-grader at Polo Park Middle School runs to his father U.S. Navy Senior Chief Michael Forjan, Tuesday in Wellington on September 17, 2019. Forjan, who has been in Iraq since April, surprised his son by showing up unexpected in the school’s cafeteria. [ALLEN EYESTONE/Palmbeachpost.com]

“They didn’t know they could come up to me,” Forjan said later, laughing. 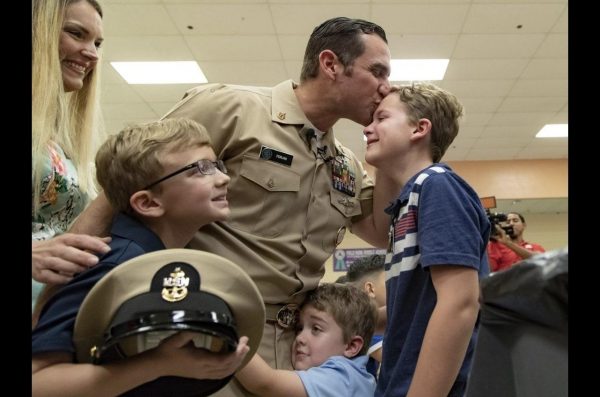 U.S. Navy Senior Chief, Michael Forjan kisses his son, Gabriel, 11, a sixth-grader at Polo Park Middle School, Tuesday in Wellington on September 17, 2019. Forjan, who has been in Iraw since April, surprised his son by showing up unexpected in the school’s cafeteria. (L to R) Wife, Kirsten, son, Christian, 9, and Logan, 5. [ALLEN EYESTONE/Palmbeachpost.com]

Adriana’s class was gathered in the gym, where her peers sat cross-legged on the floor while she stood with her hands over her eyes and her father sneaked up behind her.

“As soon as I saw her standing there, I started losing it a little bit,” Forjan said, smiling.

The last to get the surprise was 11-year-old Gabriel at Polo Park Middle School. 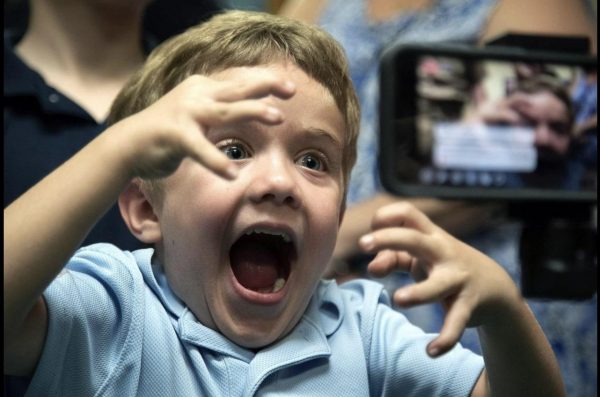 Logan Forjan, 5, gives his impression of the reaction his older brother Gabriel, 11, will make when he sees his father make a surprise visit at Polo Park Middle School, Tuesday in Wellington on September 17, 2019. [ALLEN EYESTONE/palmbeachpost.com].

Forjan, his wife and three other children waited in a side room off the cafeteria as Gabriel and a horde of other sixth graders were ushered in and told to sit before heading to the lunch line.

The trap almost sprang early thanks to a throng of eager journalists hauling cameras and smartphones. Students were brought into the cafeteria where they were told that the camera crews were reporting on public school lunches – a story pitch that elicited laughter from some students.

Principal Michael Aronson called Gabriel to the front of the cafeteria under the guise of being the first to share his thoughts on lunch.

Then came the big reveal: Aronson told Gabriel he was actually welcoming home his father.

Gabriel stared in disbelief at Aronson before the principal continued, “Your dad’s at the back of the cafeteria.”

Gabriel turned and saw Forjan walking from the side room. His eyes filled with tears as he ran full-speed and jumped into his father’s arms to the cheers of the roomful of students.

They embraced for nearly a full-minute there, surrounded by students, cameras, and Forjan’s wife and parents. Gabriel’s younger brother Christian sneaked into the scene and smiled up at his brother, whose tear-streaked face gazed up at his father in awe.

Aronson eventually herded the crew back to the side room as students and teachers applauded.

Gabriel’s reaction was “by far the most powerful,” Forjan said. “I’m pretty sure he would have knocked down anybody who was in his way.”

Forjan revealed to his children that he arrived Monday night. Kirsten Forjan told the children she was spending a night out with the girls, when instead she was picking up her husband from the airport.

“I snuck in at night,” Michael Forjan said, laughing. As the children were getting ready for school, “I was hiding in the bedroom,” he said.

Spending six months away from his family was difficult, Forjan said.

“My wife is amazing,” he said, adding, “My being in Iraq is difficult, but I’m not here with four kids.”

There are times when his wife will tell him everything that is happening at home, and he marvels at how she keeps it all together and running, he said.

Forjan returns to Iraq in two weeks, where he will remain deployed until the spring.