Lauren Bruner, one of the last surviving USS Arizona sailors, dies at 98

Lauren F. Bruner, USS Arizona survivor, talks to Sailors and Marines assigned to amphibious assault ship USS America (LHA 6) about his experiences during the attack on Pearl Harbor. Bruner joined the U.S. Navy in 1938 just after his 18th birthday and is one of 10 remaining survivors from USS Arizona, which was sunk during the World War II attack on Pearl Harbor in 1941. America is the first ship of its class and the fourth to bear the name. (U.S. Navy photo by Mass Communication Specialist 1st Class Lewis Hunsaker)
September 14, 2019 Timothy Hurley - The Honolulu Star-Advertiser
Share
Tweet
Flip

Lauren Bruner, the second to last sailor to escape the sinking USS Arizona on Dec. 7, 1941, died Wednesday in California at age 98.

Bruner is the second crew member to die in as many months, leaving Don Stratton, Lou Conter and Ken Potts as the only former crewmen remaining from the 337 men who survived the attack on the battleship which now rests at the bottom of Pearl Harbor.

“We are deeply saddened to share the news that Pearl Harbor Survivor Lauren Bruner has passed away,” the Pearl Harbor National Memorial posted on its Facebook page. “He will be greatly missed.”

Bruner, who suffered burns to three-quarters of his body from the attack, had visited Pearl Harbor many times over the years and was well-known at the visitor center. 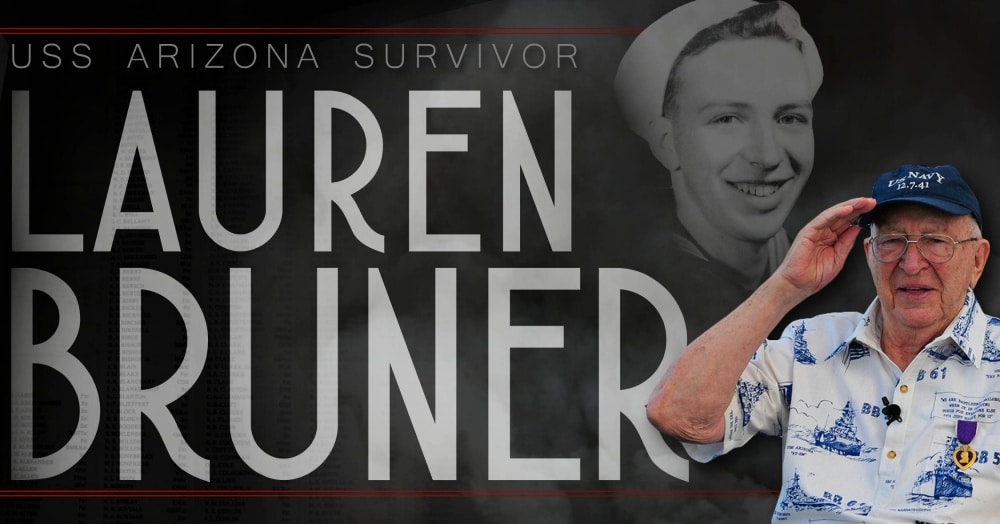 Recently Bruner launched the “My Dream Gift to America” fundraiser, a campaign to create a touchscreen kiosk at the Arizona Memorial allowing the public to view a portrait and biographical information on all 1,512 crew members of the battleship.

The survivor told his harrowing USS Arizona story in “Second to the Last to Leave,” so-called because only one man after Bruner, Alvin Dvorak, escaped by crawling on a rope that had been thrown over to the sinking ship by a sailor on the adjacent repair ship USS Vestal.

Six men were able to go hand over hand 60 feet above the burning water to the safety of the neighboring ship.

In his book, Bruner described the anticipation of arriving in Hawaii in 1940 to “chase some girls in grass skirts.” He recounted the drills on the Arizona, nickel beer on base, shore patrol duty on Hotel Street, hanging out at Smith’s Union Bar and pay of $21 a month.

Bruner was waiting to get off the ship on the morning of Dec. 7, 1941, for a date with a Japanese bartender when he heard a “whump!” that shook the deck and the staccato bursts of machine gunfire.

“With each explosion, Arizona shook like a dog shedding water,” the book says.

Bruner, then 21, took a machine gun bullet to the leg and then endured massive burns.

He spent seven months in a hospital, where they would soak his hands in brine water and then peel off the dead skin and then soak them in alcohol.

After recovering, Bruner served on a destroyer that saw eight major engagements during the war.

He was discharged in late 1946 at a rank of chief fire controlman.

Time is running out for the Pearl Harbor veterans. Lonnie Cook, 98, who helped wounded crew from the starboard USS Arizona quarterdeck during the attack, died July 31.

Everett Hyland, a crew member of the battleship USS Pennsylvania and a volunteer at the USS Arizona Memorial visitor center, died July 23 at age 96. And James “Jim” Leavelle, 96, a supply sailor aboard the USS Whitney, died last month.

Originally from Washington state, Bruner enlisted in the U.S. Navy shortly after graduating from high school in 1938.

In a National Park Service video interview, Bruner said times were tough during the Great Depression. “There was no way to get a job so the next best thing was to join the service,” he said.

During his post-military life, Bruner married three times, worked at a plant making industrial-size refrigerators and eventually lived by himself in the Los Angeles area.

According to his foundation website, he planned to be cremated and have his ashes buried with his shipmates on the USS Arizona.